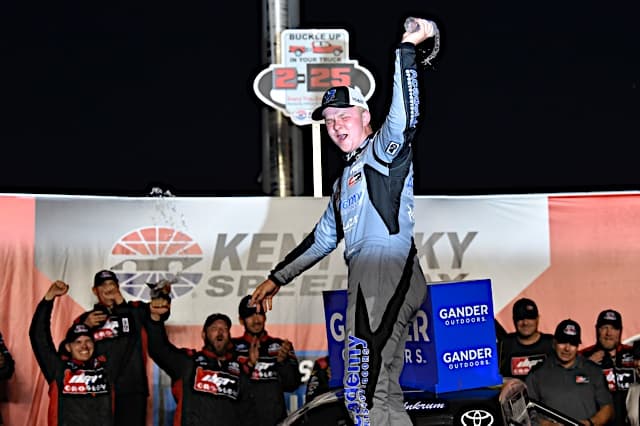 Tyler Ankrum took advantage of Brett Moffitt’s empty fuel tank and scored his first career Gander Outdoors Truck Series victory in Thursday night’s Buckle Up in Your Truck 225 at Kentucky Motor Speedway. He led a race-high 40 laps along the way.

“Honestly, I wasn’t even really listening. I was just driving my rear-end off,” Ankrum said when asked what his team told him over the radio in the closing laps. “Holy cow. I think I held my breath through the last three laps there. I’m tired. I think I honestly forgot to breathe. Holy cow.

“That was awesome. I just can’t thank my guys at DGR-Crosley enough. Got to thank the guys at Railblaza, Academy, Toyota – man, I just don’t know what to say.”

Stewart Friesen, who had to go to a backup truck after his primary was confiscated by NASCAR earlier in the day, finished second, followed by Harrison Burton. Ross Chastain and Dylan Lupton, who snagged a career-best finish, rounded out the top five.

Meanwhile, Austin Wayne Self scored his best finish of 2019 in sixth. He was followed by Moffitt, who was credited with a seventh-place result as the last truck on the lead lap. Spencer Davis grabbed a career-best eighth, followed by Jeb Burton, who made his quiet return to the series for the first time this season. Johnny Sauter, despite early damage from a stage two incident, rounded out the top 10.

Grant Enfinger started on the pole but it was Sheldon Creed who took advantage and took the top spot before Enfinger could even get back to the start/finish line to complete lap 1.

The stage was fairly calm with the exception of Austin Hill’s motor troubles. He brought the No. 16 Toyota to pit road with a loss of power, despite his gauges reading correctly. His pit crew worked under the hood and sent him out for a single lap before Hill retired to the garage and a disappointing 31st-place finish.

The guys are back in the garage trying to diagnose the issue. Needless to say our night is over. ? pic.twitter.com/0PoqsB42eR

Creed went on to the win the stage, followed by Enfinger, Todd Gilliland, Ankrum and Chastain to round out the top five.

Stage two was the complete opposite of stage one and filled with four cautions and a longest green flag run of three circuits.

After completing just two laps, Spencer Boyd dove inside Natalie Decker and slid up the track and across the nose of the No. 54 Toyota. The two spun into the outside wall and collected Jordan Anderson along the way. The trio of drivers saw their nights end early, though Decker managed to run a handful of laps before retiring to a 27th-place finish. Boyd and Anderson ended up 29th and 30th, respectively.

Once the cleanup from that incident was complete, it took just three laps before Chad Finley spun on his own, ending his night. Just one lap after that restart, Burton got clipped by Chastain in a three-wide battle, sending the driver of the No. 18 Toyota spinning. The spin also collected Gus Dean, Johnny Sauter and Josh Bilicki with Dean taking the brunt of the damage. He retired to a 25th-place finish.

Once again, the field restarted on lap 65 but didn’t stay green for long as the leaders of Brandon Jones and Enfinger got together in turn 4.  Jones was not pleased and went over to talk with Enfinger after he got out of his truck. Enfinger took full responsibility for the contact between the two.

That incident ended stage two under caution, handing the playoff point to Crafton.

Ankrum and Crafton started on the front row for stage three and it was the rookie who took advantage and pulled away. It was the opposite for Crafton, as he got loose in turn 1 and had to make a huge save to not wreck.

Creed, who had taken the stage one victory, worked his way through the field but hit the wall twice and ended his hopes of a solid night. He went on to finish 21st, 19 laps down.

Stage three went caution free for the final 74 laps, and several teams, including Moffitt’s, who dominated much of the final stage, pushed the limits on fuel mileage. In addition to Moffitt, Crafton and Gilliland ran out of fuel with three laps remaining.

With just three races remaining in the regular season, Enfinger maintains his stronghold on the point lead by 52 markers over Friesen. Moffitt, Crafton and Rhodes round out the top five. Burton sits sixth in the standings, though he’s out of the playoff field at this time. Daytona winner Hill and winless Gilliland are seventh and eighth, respectively, while Creed and Sauter round out the top 10.

Chastain’s top-five run was enough to move him into the top 20 in points and put him in the playoffs at this time. He’ll join the other four winners this season in Hill, Moffitt, Sauter and Ankrum in the championship battle, along with three drivers yet to be determined. Barring disaster in these next three races, Enfinger will likely take the regular season championship to take the sixth spot in the Round of 8. As of right now, Friesen and Crafton would be the final two drivers to make the playoffs, locking Kyle Busch Motorsports out of the championship battle altogether.

The Truck Series takes the next two weekends off before heading to Pocono Raceway Saturday, July 27. Coverage for the Gander RV 150 begins at 1 p.m. ET on FOX.