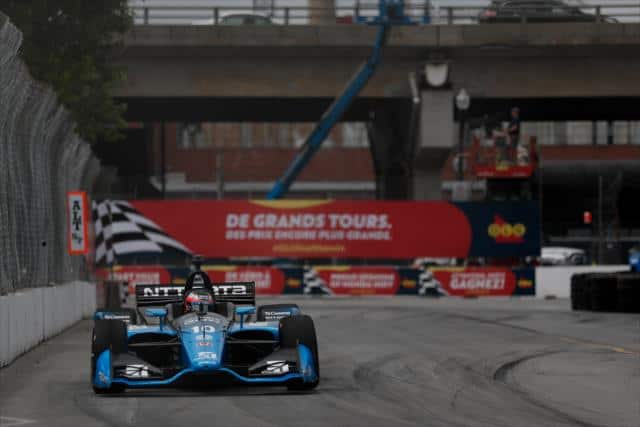 I’m sure the break was pleasant for everyone in the NTT IndyCar Series paddock, but man have I been missing some on-track action. Last time we saw the series, Alexander Rossi was leaving the field in his dust at Road America, but that was almost three weeks ago.

Luckily for all of us, the series is getting back to it north of the border on the Streets of Toronto, which never fails to provide some fireworks. The series always leaves some carnage in its wake when it hits the tight, rough street circuit, and this year is already shaping up to be no different.

Turn 11, the last corner before the long front straight, has already caught several drivers out in the weekend’s three practice sessions, including a few former champions. Team Penske pilots Will Power and Josef Newgarden both spun on the exit of the turn on Friday, in addition to Takuma Sato and Marcus Ericsson, who clipped the outside wall on exit. That corner will be one to watch on Sunday, especially during the start and restarts, when the field will be getting on the gas on the run down to turn one.

The third Penske driver, Simon Pagenaud, however, hasn’t had any issues navigating the tricky turn. This year’s Indianapolis 500 champion has looked quick all weekend, and could be one of the guys to beat as he set up his run for his second Astor Cup.

As the lone Canadian race on the schedule, this weekend’s a big one for James Hinchcliffe, a Toronto native. The Mayor of Hinchtown has never managed to take home the trophy at Exhibition Place, but will be looking to become just the second Canadian to win in front of the hometown crowd. He’ll also be hoping to right the ship in what has been a mediocre season so far for Arrow Schmidt Peterson Motorsports. Just ninth in the season-long points standings, Hinchcliffe has yet to finish in the top-five this season, and only has five top-tens in what was supposed to be breakout season for ASPM.

Right out of the gates, Chip Ganassi Racing looked to be the team to beat this weekend. Last year’s Honda Indy Toronto winner Scott Dixon and teammate Felix Rosenqvist rolled off with plenty of speed and have been at or near the top of the speed charts all weekend. Dixon was quickest in the opening session and was followed closely by Rosenqvist, who laid down laps of second or third quick in all three sessions.

Pagenaud, however, topped both of the Ganassi drivers in the second and third sessions, leading both by a tick over Rosenqvist. His teammate, Newgarden, was second quick in first practice but fell down the standings as the weekend progressed, ending the third session way back in P13.

The Andretti Autosport crew also showed some speed, with Rossi, Ryan Hunter-Reay and Marco Andretti all hovering in and around the top five in the Honda-powered Dallaras. While never showing the dominant speed Rossi had at Road America or Long Beach, the four-car team always shows well on Sunday.

But the real surprise, come Saturday afternoon’s qualifying session, was Ed Carpenter Racing. Ed Jones led his group in the first round of qualifying, beating the likes of Newgarden, Pagenaud and Rossi, a performance which he promptly followed up with a trip to the Firestone Fast Six. His teammate, Spencer Pigot, continued his decent showings in qualifying with another top 12 effort, while just missing out on the Fast Six.

Power who had never shown his world-class speed all weekend, couldn’t pull off a miracle in qualifying and didn’t advance out of the first round, along with hometown hero Hinchcliffe, Colton Herta or Sage Karam, who is making his first road or street course start since 2015 this weekend.

He’s third in the points standings, and now he’s sitting P1 for @hondaindy.

But it was Pagenaud who continued to dominate the weekend, claiming his second pole position of the year, beating out Dixon for the NTT P1 Award. Rosenqvist will follow the pair of veterans on the inside of row two, where he’ll be joined by Rossi, the lone Andretti Autosport driver to make the Fast Six. Newgarden and Jones, despite their speed in the earlier rounds, qualified fifth and sixth, respectively.

Pagenaud was in the thick of the championship hunt after his Month of May sweep but has fallen behind his teammate to the tune of 61 points in the standings in the four races since Indianapolis. A win this weekend could go a long way toward cutting into that gap and putting the Frenchman in a position to make a late-season run for the title.

Newgarden and Rossi, the two at the head of the championship fight, will both be looking to get a jump on the other, as they start nose to tail on Sunday, and with just seven races left in the season, every point counts. While a poor result for either driver won’t necessarily end their title chances, it could set up a tough road ahead to try to take home the series crown at WeatherTech Raceway Laguna Seca in September.

Rosenqvist had his best performances of the year on the street courses at St. Petersburg and Detroit and again looks like he’ll be a contender this weekend at another narrow street circuit. While his season hasn’t gone as well as we all thought it would after his spectacular debut in Florida, this weekend could be another chance for the Swede to get his first career IndyCar win and put the No. 10 back in victory lane for the first time since 2014.

? Things got heated on the Streets of Toronto ? And qualifying hasn't even started yet ?

Sebastian Bourdais and Sato had a bit of a tussle after an on-track incident during Saturday morning’s practice three. The Frenchman seemingly cut in front of Sato down the long back straight, a move that the 2017 Indianapolis 500 winner didn’t appreciate. Once out of the car, Sato approached Bourdais and the two tangled briefly before being separated by IndyCar staff and Dale Coyne Racing crew members. But there won’t be anyone out on the track to separate the two on Sunday, as Sato will line up directly behind Bourdais on the grid, which could prove to be trouble as the pair make the charge down to turns one and three on the opening lap. Never one to back down under normal circumstances, don’t be surprised if Sato doesn’t exactly use his manners trying to get by.

Sunday’s pre-race coverage begins at 3 p.m. ET on NBCSN with the green flag expected to drop around 3:35 p.m. ET. Live streaming is available on the NBC Sports App with a cable subscription.