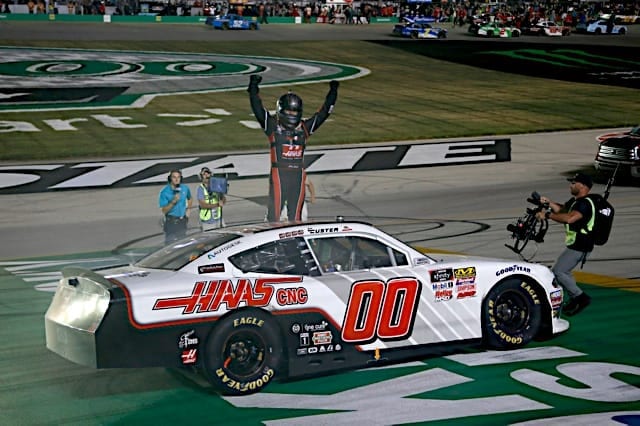 The Alsco 300 began in the daylight and ended with the Kentucky Speedway lights illuminating the summer skies, and the difference was more than just aesthetic.

While the sun was out, it appeared to be another occasion when Christopher Bell would simply be too much for the field. Twice before (at Atlanta and Iowa), Bell had swept the first two stages of a race this season. Both times, he ended up in victory lane. Even though his No. 20 team wasn’t quite on top of its game, giving away several positions during a slow pit stop at the end of stage one, Bell simply flew back up through the pack and was right back on the point before long.

The final stage was a different story. Thanks to some contrary pit strategy by Chase Briscoe, Bell didn’t even get to start the final stage on the front row, and he had a much tougher time making his way forward again. Cole Custer, on the other hand, had come to life, and once he found his way to the lead, it was pretty clear that momentum had swung to the Stewart-Haas Racing bunch.

Bell’s best chance to reassert himself came during the green flag pit sequence in the last stage. By pitting five laps before Custer, he gained valuable time that almost put his Toyota back in front once all the stops cycled through. But Custer came out in front, and though there was a brief scramble through lapped traffic that almost materialized into a duel, the No. 00 was simply too fast to catch, and the race stayed green the rest of the way. All Custer had to do was not wreck or have anything break, neither of which happened.

Custer’s fifth victory of 2019 was arguably the most impressive effort from his team this season because he definitely did not have the car to beat for at least 150 miles at Kentucky. If you’ll excuse the obvious day and night cliche, that’s really what it looked like during the time it mattered most.

“This one just goes to my team,” Custer said during his initial post-race interview. “That car was just unbelievable at the end. They knew exactly what to do with it when the track changed, and I was just lucky to drive it there at the end.”

Every time Custer or Bell has flexed their muscles, the other has found a way to answer — as has Tyler Reddick, who finished third on Friday night. Bell is the defending race winner at New Hampshire, the series’ next stop, and has won two straight at Iowa. He could regain the lead in wins in just two weeks and no one would be shocked.

Yet Kentucky was still the kind of race that could linger in the minds of both teams because it started as a dominant Bell day and ended with Custer accepting the checkered flag. That’s something we hadn’t seen before, but can’t be ruled out to happen again before season’s end.

Michael Annett is the kind of driver who doesn’t get a ton of respect from casual NASCAR fans. There’s something about a 33-year-old hanging around the Xfinity Series that just automatically brings on some feelings of disdain from some corners, justified or not.

It didn’t help that Annett was winless for his career in NASCAR’s three national series prior to 2019, but he quickly took the season opener to get that rather large monkey off his back. Since then, he’s quietly been showing the kind of improvement that has been a long time in coming but is welcome nonetheless.

Not only did Annett’s fourth-place finish at Kentucky tie his best result ever at the track, it also gave him five top-five finishes on the year. He’s on pace to demolish his best total in that area and has generally looked the part of a driver who is just a notch below the Big Three. He’s also doing it in a year where JR Motorsports has been just a bit off the pace overall — Annett has the team’s only win — which also needs to be taken into account.

He’s no title contender yet, but as the Custer-Bell-Reddick group gets ready to depart for the Cup Series sooner rather than later, it’s not hard to see Annett battling it out for a championship over the next few years with just a little more improvement. That’s not something anyone would have said even two years ago.

It stinks when you have your fastest car all season and end up in 30th place through no fault of your own, but that’s exactly what happened to Brandon Jones on Friday. There were moments, especially early on, when Jones was passing this year’s other contenders and maybe even positioning himself to race for a win.

He might even have given Custer a run for his money, seeing as he finished second in stage two and was leading the race in the final stage when his evening literally went up in smoke. Just six laps past the halfway point, he took the No. 19 Toyota to the garage, and that was that.

Jones could be forgiven for not ever wanting to return to Kentucky Speedway, considering he was racing for the lead in the Truck Series race when he wrecked out and pacing the field the next night when his engine gave up the ghost. To his credit, he chose to look at the bright side when speaking to NBC Sports.

“Been running first both races this week, and that’s what we’ve got to do, at least on my behalf,” Jones said. “I hate it. … It was going great for us, I think we had the car to win the race tonight, but all in all these guys worked really hard, and I think they’re all behind me and we’re going to get this thing figured out.”

As a fan, it’s not ideal to have only a handful of cars left on the lead lap during the closing act of a race, but the Alsco 300 ended with only the top five running all 200 laps, and even third-place Reddick more than 10 seconds behind the leaders.

Some of that could be chalked up to Custer and Bell simply being faster than everyone else, but a surprisingly awful set of pit stops added to the misery. John Hunter Nemechek left his pit stall with a wrench still in the rear of his Chevy. Justin Allgaier got nabbed for speeding on pit road. Those were potential top-10 cars (and Allgaier still finished seventh), or at least drivers who could have avoided being lapped.

That mess helped lead to the anticlimactic nature of what was a fairly entertaining race through the first two stages. Here’s hoping the Cup Series crews are a little cleaner on Saturday night.

Welcome back, Ryan Sieg! We’ve missed you in this section of the Breakdown.

Let’s do a quick review: Sieg and his RSS Racing team racked up five top-10 finishes in the first eight races of 2019, but just one over the next eight. Sieg wasn’t quite as feisty as he was in his early season form at Kentucky, but his ninth-place result was still very solid and the kind of performance he’s shown to be capable of on a regular basis.

Jeremy Clements picks up a deserved honorable mention by coming home 13th, his fifth top-15 finish in a row and sixth in his last seven races.

No Cup Series drivers entered the race, and even the Melon Man wasn’t competing. In fact, only Camden Murphy wasn’t running for Xfinity Series points, meaning this was pretty close to a Dash 4 Cash field.

“It’s all about realizing where you’re running when this stuff’s happening. We continue to run top five, we continue to lead laps.” – Brandon Jones

“I don’t look too good after falling off the car like that, but that was an unbelievable race.” Cole Custer (after nearly face-planting during his victory lane celebration)

“We just kind of got worse there. … We probably just got too comfortable and needed to free it up a little bit.” – Christopher Bell

It wasn’t a thriller thanks to Custer sailing off into the distance, but the Alsco 300 did feature some tight racing before day changed to night, a variety of leaders and a few intriguing subplots. Let’s call this one slightly above average but with room for improved entertainment value next week.

In terms of the push and pull between the Big Three, the ball is definitely back in Reddick’s court. He actually has the most standard points by a fairly comfortable margin, but is in danger of spotting his two chief rivals too many playoff points, and could really use another win and some more stage wins to rectify that situation.

To New Hampshire we go for the ROXOR 200. And Bell fans, take heart: Not only did your driver win this race in 2018, but he beat Cup Series regulars like Brad Keselowski and Austin Dillon to do it, and it wasn’t a particularly stellar day for either Custer (who finished ninth) or Reddick (25th).

The Xfinity Series also returns to Saturday afternoons for the next four weeks. Coverage from New Hampshire Motor Speedway is set to start at 4:00 p.m. on July 20 on NBCSN.