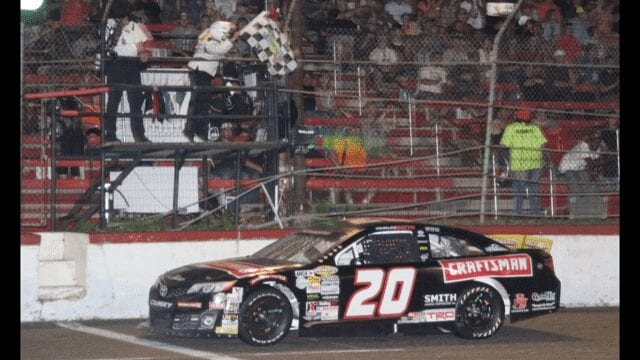 In a Nutshell: Though it was unusual to see Chandler Smith start well off the front row for an ARCA short track race, Saturday night’s Menard’s 250 played out as so many short track races have in ARCA the past two years: with Smith and the No. 20 car proving utterly dominant. Taking the lead for the first time on lap 92, Smith bested Sam Mayer on a lap 209 restart and never looked back, scoring his third win of the 2019 season and the fourth ARCA trophy of his career.

Ty Gibbs, Mayer, Michael Self and Corey Heim rounded out the top five.

Smith spent much of the race dueling with Gibbs, who was making his first ARCA start since scoring his first career win at Gateway a few weeks back. But he eventually had to top Mayer, whose GMS Racing team used pit strategy to take their final four tires before the rest of the field under a lap 166 caution. All of this was done by Smith despite a solo spin while leading the race on lap 145.

What started as a much needed jump up the point standings for Christian Eckes went up in flames on the final lap. After winning his second career ARCA pole, leading more than 70 laps and running in the top five on the final lap, Eckes was spun in turn 3 after teammate Self made an ill-advised divebomb into the corner, dropping Eckes to 11th in the running order. Self took responsibility for what he called a greedy move in his post-race remarks, noting he felt “like an ass” for taking out his teammate and friend.

Ass or not, Self’s fourth-place finish allowed him to capitalize on struggles for the rest of the ARCA title contenders on Saturday. Besides Eckes’ last lap troubles, Bret Holmes limped around the back of the top 10 with front end damage, Travis Braden spun multiple times and also suffered rear end damage. Meanwhile, Joe Graf, Jr. battled to finish seventh after falling two laps down after a lap 181 incident with Eric Caudell. Leaving Elko, Self now leads Holmes by 65 points, with first through fifth separated by 225 markers.

Though Smith and his team would likely view their seventh place qualifying effort as an abject failure, starting that deep in the field allowed the young driver to demonstrate just how skilled at short tracking he is. Despite being on the confines of a 3/8-mile oval, the shortest track on the ARCA circuit, Smith was able to move through traffic at will, doing it all while avoiding tire wear issues that saw teammate Eckes fade quickly to the back of the top five within 20 laps after leading the first 71. Still too young to contest all tracks on the ARCA circuit, the way Smith keeps running he may never win an ARCA title because by the time he turns 18, there will likely be bigger leagues calling.

Though Mayer was unable to hold off Smith during the final 41 laps after leading heading into a lap 209 restart, the GMS youngster showed great composure in holding onto a spot in the top five despite being bombarded by a Toyota brigade, including Venturini Motorsports teammates. With Win-Tron Racing only a part-time effort in 2019, Mayer will likely be Chevrolet’s best chance at winning an ARCA race this season.

Graf’s seventh-place finish was his best since Madison, and all the more impressive given that he earned it coming back from laps down.

Hailie Deegan’s eighth-place finish wasn’t flashy and likely less than what her No. 55 was capable of, but after weeks of interviews that involved a concerning amount of focus on and comfort with moving people to win races, seeing the No. 55 come home clean and involved in no incidents was a welcome relief.

Did anyone else notice Deegan’s No. 55 still had IK9 graphics on it despite recent uncertainties with the company’s NASCAR sponsorship of Jeffrey Earnhardt?

Even before the spin cycle started, Braden was running towards the back of the top 10, a disappointing effort for a driver who both won his ARCA debut on a short track in 2015 and has shown newfound strength on the intermediates in recent weeks. But between bringing out two yellow flags on lap 166 and lap 203 for spins, multiple contacts with Holmes racing towards the back of the top 10 and issues on pit road during repairs after the lap 203 spin that forced the driver back down pit road to tighten lugnuts, title contention was a far cry away this Saturday, even on a tight bullring.

Speaking of Holmes, his ninth-place finish keeps his top 10 streak alive at nine races, but at no point in Saturday’s race was the No. 23 team a factor.

Caudell was involved in two spins and finished 17 laps down in 13th.

Tim Richmond completed only 100 laps in Wayne Peterson Racing’s No. 06, the furthest from the finish the team has come on a short track in 2019.

The curse of 2019 continues to haunt Eckes, no matter what he does on the track. Eckes won the pole on Saturday and led the first 71 laps of the race but suffered tire degradation during that green flag run that didn’t seem to affect any of his Venturini teammates. Once the No. 15 team was able to pit for tires under a lap 92 caution, Eckes stabilized in the top five for the remainder of Saturday’s race, only to get spun coming to the checkers courtesy of his teammate Self.

There was clearly no malice on Self’s part looking at the replays, so it’s doubtful this incident will cause a lasting rift in the Venturini camp. But getting dumped by a teammate, on the last lap, and losing out on a race result that would have capitalized on an otherwise subpar night for most of the ARCA title contenders is about as ugly as it gets.