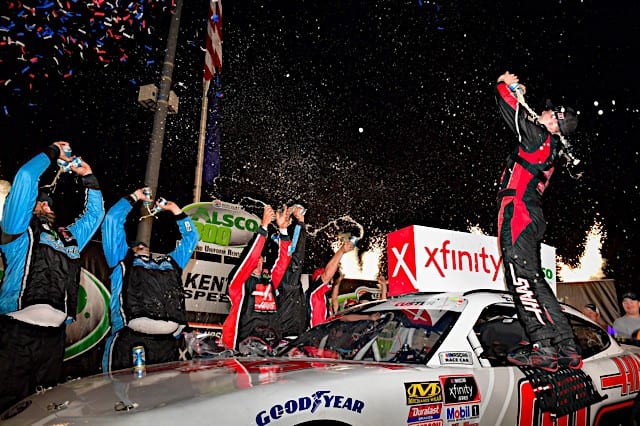 It was a battle between brothers to close out the night’s Quaker State 400 at Kentucky Speedway. When a flat tire and spin from Bubba Wallace brought out the caution at lap 262, the field prepared for overtime. Joey Logano and Kyle Busch restarted on the front row for the green-white-checkered with Kurt Busch and Erik Jones behind. Kurt Busch, with the help of his Chip Ganassi Racing teammate Kyle Larson, passed Logano on the outside. The siblings then exchanged positions, battling side-by-side for the final lap. Ultimately it was the elder brother Kurt who took home his and CGR’s first win of the season.

The elder Busch redeemed himself after last week’s costly pit road decision at Daytona. While leading the race under caution, the field received the one-to-go signal and crew chief Matt McCall brought his driver down pit road to refuel. Unfortunately, a lightning strike occurred within the proximity of the track, and NASCAR held off the restart. The stormy weather was an annoying deterrence that affected the entire weekend, and NASCAR ended the race under red following a lengthy delay that ended in heavy rainfall.

Now he can put all that behind him after earning Chevrolet its first victory at Kentucky.

This wasn’t the first clash between the two brothers fighting for the lead. Back in April at Bristol Motor Speedway, it was the younger Busch brother who ended up prevailing over the 2004 champion after another late-race caution. Fast forward to today, Busch is now a winner of the jukebox trophy.

Though Kurt did take stage one, his first stage victory of the season, he only battled with Clint Bowyer for the lead around lap 200 after William Byron was penalized for a restart violation. Later, during green-flag pit stops, McCall called for four tires, while the younger Busch and Logano took two. Thanks to those fresher tires and a push from his teammate, Kurt was able to fight his younger sibling to the end.

“Thank you to everybody on this team back at the shop that works on this car and makes it the winning car that it is,” Kurt said to NBC Sports in victory lane. “We’re going to have those days where things don’t go right.  Today things went right, and my little brother gave me just enough room.  It was like, you gonna lift?  I ain’t gonna lift.  You gonna lift?  I ain’t gonna lift.  And we had a duel.  We had a duel going down through 3 and 4, and I didn’t know who was going to come out on top.”

And dueled they did. – Joy Tomlinson

It’s been nice to be Cole Custer lately, and his recent hot streak continued over the weekend at Kentucky.

The No. 00 car held off Christopher Bell, who swept the opening two stages of the race, through a cycle of green flag pit stops. When the checkered flag flew, Custer was out front by 1.6 seconds, lapping up to fifth.

Custer picked up his fifth win of the season, leading 88 laps in the final stage. It’s the seventh win of his career, six of those coming in the past 20 races (dating back to the fall Texas race last November).

Tyler Reddick finished third, while Michael Annett finished fourth and Chase Briscoe fifth, a half-second ahead of Custer from going a lap down.

Overall, this race was a bummer. The first two stages had flashes, but the run to the finish was over 100 laps, in which Custer and Bell flat checked out. So much so, John Hunter Nemechek in 12th was two laps down.

Daytona Cup winner, Justin Haley, was none-too-pleased, though his race was hindered on lap 56 when Austin Cindric got loose underneath of the No. 11 Chevrolet. The end result? Both ended up in the outside wall.

“That’s the most unfun time I’ve had in a racecar in a long time,” Haley said after the race. “You’re just driving around… I don’t know how long that green flag run was but I could have fallen asleep.” – Dustin Albino

When Brett Moffitt ran out of fuel with two laps remaining in Thursday night’s Buckle Up in Your Truck 225 at Kentucky Speedway, Tyler Ankrum scored his first career Gander Outdoors Truck Series win and the first for second-year team DGR-Crosley.

It’s not like it was a surprise victory either as Ankrum has excelled on the few mile-and-a-half starts he’s made this season. Additionally, he was inside the top five in both of the first two stages after starting ninth.

Ankrum’s victory did a number on the playoff standings with just three races remaining to set the field. After missing the first three races of the year because he wasn’t old enough to run them, Ankrum also suffered sponsorship issues that saw him make a pair of start-and-park efforts with NEMCO Motorsports at Iowa and Gateway before returning to the No. 17 with DGR-Crosley. As a result, he currently sits 12th in the standings, though his victory allows him a chance to run for the title, thanks, in part, to an age waiver issued by NASCAR.

“I cannot believe that we just did this; it’s incredible. This is a dream come true,” Ankrum said of his victory. “I’ve always doubted myself, and I think tonight is going to wash all that away.

“It’s going to take a lot more work to chase a Championship, but we are one step closer.”

If the playoffs started today, the five races winners this season in Ankrum, Ross Chastain, Austin Hill, Brett Moffitt and Johnny Sauter would join regular season point leader Grant Enfinger as part of the eight-driver field. Meanwhile, Stewart Friesen and Matt Crafton would point their way into the final two spots, though that may be in question depending on what NASCAR decides to do with a potential penalty for a firewall issue on Friesen’s primary truck that was confiscated Thursday morning.

With three very unique races remaining in Pocono, Eldora and Michigan, there’s still time for more of a shakeup in the standings before the playoffs begin. What many of those teams currently in the playoffs want to see is a repeat winner or a victory by someone who isn’t eligible for points (Eldora most likely). Otherwise, there’s still plenty of changing that could happen before the battle for the championship truly begins. – Beth Lunkenheimer

Simon Pagenaud, despite a mediocre start to the year, is looking like a serious contender for the 2019 NTT IndyCar Series Championship.

After sweeping the Month of May with wins in both the IndyCar Grand Prix and the 103rd Indianapolis 500, the Frenchman put himself in the conversation with Josef Newgarden and Alexander Rossi, who have been at or near the top of the standings since the opening round in St. Petersburg.

But after Sunday’s victory at the Honda Indy Toronto, the 2016 champion is more than just in the conversation. He’s in the fight.

Now just 39 points behind Newgarden, the pilot of the No. 22 Team Penske Chevrolet is the first to really challenge the two young Americans for the crown in what was mostly shaping up to be a two-man duel. While it’ll be no small task overtaking the two most consistent drivers all year–the pair finished third and fourth this weekend–Pagenaud has positioned himself to at least have a chance.

And if he can keep this form, watch out, because no one, not even Scott Dixon, was stopping him on Sunday. Saddled with fuel saving and a boatload of traffic in the latter stages of the race, Pagenaud still managed to hold off the five-time champ and win his third race of the year, a feat matched only by Newgarden.

With just six races left on the calendar, it’s still anyone’s title to win–or lose–but one thing’s for certain: whoever claims the championship will have to go through Pagenaud to do it. – A.J. Hecht

One track on the ARCA Menards Series Schedule that has eluded Christian Eckes has been Elko Speedway in Elko, Minnesota. He has finished second two straight seasons, and on Saturday Night, it looked like Eckes was either going to break that drought or earn his third straight runner-up finish.

On the last lap, that wasn’t the case.

Points leader Michael Self went to move ahead of Eckes and when he did, he moved Eckes out of the way. As Chandler Smith crossed the finish line, earning the win, Eckes was nowhere to be found as MAVTV had shown the battle between him and Ty Gibbs with Self threatening. Self did more than threaten and took the position away from Eckes. The driver of the No. 15 had to settle with an 11th-place finish.

Despite the disappointing finish, Eckes still gained on third place Travis Braden in the points. During the broadcast, MAVTV denoted that his crew chief Kevin Reed noted they still felt like they could go out and win the championship without the points from Salem. Eckes now has a 115-point gap between him and points leader Self.

The series now heads to Corn Country and the Iowa Speedway in Newton, Iowa for the Fans With Benefits 150. The race will be shown on MavTV at 9 p.m. ET. – Christian Koelle

It was a very exciting British Grand Prix. The race result may not be too surprising as Lewis Hamilton becomes the most successful British Grand Prix driver of all time with his sixth win in Silverstone. Valtteri Bottas had a tight lead in the race but the safety car came out after Bottas stopped and before Hamilton changed tires. Hamilton was a able to stop without losing the lead and then sped to victory.

Most of the action was between the Ferraris and Red Bulls. Charles Leclerc and Max Verstappen were in a tight wheel to wheel battle for position all through the first half of the race. Verstappen just could not get past Leclerc on the track. Red Bull got t Verstappen past Leclerc in the pits, but a mistake by Vetstappen gave the position back to the Ferrari. Leclerc showed us today why Ferrari consider him the future of the squad with amazing defensive driving, and a marvelous overtake around the outside of Pierre Gasly after Ferrari botched his strategy around the Safety Car.
Leclerc was gifted third after the battle between Verstappen and Sebastian Vettel led to the latter smashing the back of Verstappen going into the final chicane. It is clear that Vettel was on the back foot all weekend as he was out qualified by the under-performing Gasly. Vettel tried too hard to get to the inside of Verstappen and destroyed the front of his car. Vettel ended the day with no points and a 10 second time penalty. Where is the four-time champion in Vettel? Mistakes and lack of performance has cost the German valuable points all season, it is becoming evermore doubtful that he will win a title with Ferrari. – Drew Mongiello

Blancpain GT World Challenge America teams are currently in the middle of a nearly three-month-long break after their most recent race at Sonoma Raceway last month. It’s enough to make a race team a bit antsy. Wright Motorsports is doing something about it.

On Tuesday, the team announced it will return to the IMSA WeatherTech SportsCar Championship’s GT Daytona class for a limited engagement.  The team has entered the next two races at Lime Rock Park and Road America with their No. 91 Porsche 911 GT3 R that normally races in the Pro-Am class.