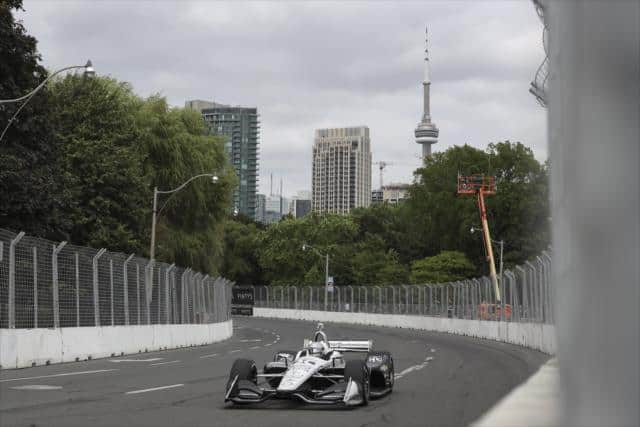 Simon Pagenaud is determined to make the 2019 NTT IndyCar Series Championship fight a three-horse race, and his job just got a lot easier on Sunday at the Honda Indy Toronto. Despite a late-race challenge from Scott Dixon, the Frenchman topped off a dominant weekend with his third win of the year, taking a big chunk out of his points deficit in the process.

And across the line! @simonpagenaud taking home 1st at #indyTO !!!

The victory pulled Pagenaud within 39 points of teammate Josef Newgarden for the championship lead, and just 35 points behind Alexander Rossi, who closed his gap to Newgarden to just four. Over 60 points back heading into the weekend, Pagenaud is now securely in the running for what could be a second series championship.

Leading 80 out of 85 laps in the concrete canyons of the Streets of Toronto, the 2016 series champion converted his NTT P1 Award into his first win north of the border and his third in the last seven rounds of the championship. On rails throughout the afternoon, the Team Penske driver was able to fight off the defending champion to take home the win, despite having to save fuel throughout the entire final stint.

As is the nature of street courses, Toronto is always good for some wheel banging, and it didn’t take long for the fireworks to fly on Sunday at Exhibition Place. On the opening lap, Will Power made a late dive under Graham Rahal heading into the tight right-hand turn eight. When the Team Penske driver pulled out underneath the Rahal Letterman Lanigan Honda machine, Rahal was already attempting to get by Marco Andretti. Heading three-wide into the tight corner, there was not enough room to pull off the move, sending Andretti spinning and Power and Rahal head first into the tires. Although the trio avoided any significant damage to their cars, Rahal and Power dropped to the back of the line for the restart. The incident also caught out Ryan Hunter-Reay, Matheus Leist and Marcus Ericsson.

Ed Jones also made some bold moves from his sixth starting position, but the Ed Carpenter Racing heel managed to pull them off cleanly, getting by Felix Rosenqvist in the hard braking zone heading into turn three after the restart. Relegated to the back of the field because of the turn eight incident, Rahal and Power began their charge back toward the head of the field, passing a few cars on the tail end of the lead lap.

During the first cycle of pit stops, Newgarden continued his streak of solid strategy calls, jumping Jones and Rosenqvist in the running order and cycling out just behind the third place Rossi. Due to several cars electing to go longer on their black side-walled Firestone tires, the pair spent the first half of the stint fighting through traffic.

Meanwhile, the pole-sitter continued to dominate the weekend and pulled away from the field. With Zach Veach, Santino Ferrucci, Rahal and Hunter-Reay serving as picks, Pagenaud put an eight second gap on Dixon, Rossi and Newgarden.

However, once the cars on alternate strategies hit pit lane, Dixon began to reel in the Frenchman. The gap shrank to under six seconds in just a matter of a few laps, but the increased pressure just added fuel to Pagenaud’s fire, as he never let the Kiwi get any closer than that until teams made their second pit stops of the afternoon.

Behind the podium contenders, Takuma Sato started to fill up Newgarden’s mirrors, pestering the championship leader until the next round of pit stops, while hometown hero James Hinchcliffe continued his charge through the field. The biggest mover in the field through the first half of the race, Hinchcliffe made his way up to eighth after starting back in 14th.

With the leaders electing to go with a two-stop strategy, Rossi was the first to make his last stop with 36 laps remaining. In order to avoid being caught out by a late-race caution, many of the leaders followed in the next few laps, setting up a long green-flag run to the finish without much change in the running order.

But as the laps wound down, Dixon slowly creeped up to the back of Pagenaud’s gearbox. A three-time winner on the Streets of Toronto, Dixon pulled the No. 9 Honda within two seconds of Pagenaud by lap 60, setting his fastest lap of the race in the process.

Despite dealing with an ailing elbow, the five-time series champion hung right with Pagenaud’s Team Penske Chevrolet throughout the late stages of the race.

Behind them, Rossi still sat comfortably in third, while Newgarden continued to hold off Sato. Sebastian Bourdais, who was running in the top 10 at the time, overshot turn three, putting the nose of his Dallara into the tires, nearly bringing out the second caution of the day. Fortunately, Bourdais was able to get his Dale Coyne Racing machine into reverse and continued on his way.

This will bring an end to @TakumaSatoRacer’s with day with less than 16 laps to run. #indyTO // #INDYCAR pic.twitter.com/fTVs3MMuJa

Shortly after Bourdais extricated himself from the tires, Sato’s chase of Newgarden ended prematurely, as the RLL Honda expired in a burst of flames. Narrowly avoiding another caution, Sato was able to quickly duck into pit-lane, ending his race and a chance at another top five finish.

Back at the front of the field, with just over 10 laps remaining, Pagenaud continued to struggle behind Hunter-Reay, who was fighting to stay on the lead lap. With the gap shrinking to just half a second at points, Dixon continued to stalk this year’s Indianapolis 500 winner. But as soon as Hunter-Reay made his final stop of the day, Pagenaud stretched his legs and opened his lead back up to a second.

Still having to manage his fuel, Dixon pulled right behind the Penske driver on the final lap, hoping to make a move in the last few corners, but was foiled by the second full-course caution of the afternoon when Power again stuffed his Chevy into the turn eight tires. The incident froze the field in place, securing the win for Pagenaud.

Behind the two front-runners, Rossi finished a lonely third, while Newgarden came home fourth despite slamming the wall exiting turn 11 with under five laps remaining. Rosenqvist, nearly 10 seconds behind when Newgarden made contact with the wall, closed the gap to just two seconds, but ran out of laps, ultimately closing out the top five.

Hinchcliffe, the lone Canadian in the field, finished sixth in front of the hometown crowd, the biggest mover of the race other than rookie Colton Herta, who finished just behind the Toronto native in seventh. Bourdais, after dumping it into the tires, recovered for an eighth place finish, while Rahal and Andretti bounced back for top 10 finishes after being involved in the first lap incident with Power.

Next week, the series heads to Iowa Speedway, a .875 mile bullring in Newton, Iowa, for the first short oval race of the year. With just six races left in the season, every point matters, and each of the contenders will be hoping survive the high-speed short track, and keep their momentum going for the final run to the championship.

Another solid race from Indycar!

Awesome to see Wickens put that Acura through its paces during pre-race. I can’t wait for him to get back in a racecar! It’s great to see the support he has received from his team, the series, and fans. They say “Behind every great man is a great woman”, and while I don’t know her or him personally, from what media I’ve seen/read during his recovery Karli is an absolute angel. He is a lucky man to have such a strong woman standing beside him – I wish them much happiness and success as their lives go forward!

As for the race, I’m not sure what Will was thinking that early in the race. Surely he didn’t realize he was the third man to the party heading into that corner? At the end, lapped traffic definitely helped add to the suspense as Simon’s car was clearly the best all day in open air, but apparently not set up to handle traffic as well.

Bummed I won’t get to see Iowa live, but I’ll be recording it!