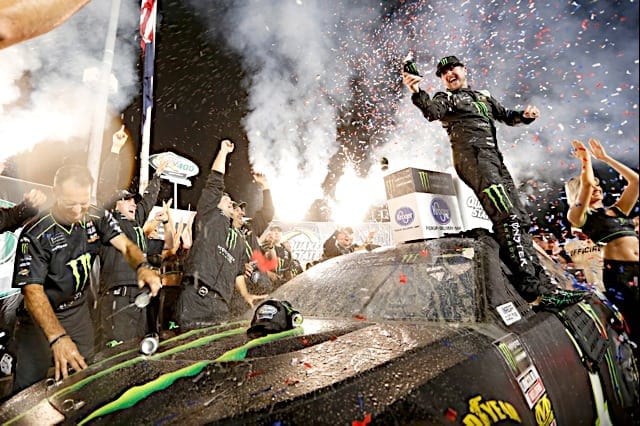 Saturday night’s Monster Energy NASCAR Cup Series race at Kentucky Speedway produced the best finish of the 2019 season.  Kurt Busch emerged victorious after a two-lap scramble for the lead with younger brother Kyle and several other drivers.  Kurt’s charge to the lead following an overtime restart capped off a night of redemption for the No. 1 team, Chip Ganassi Racing, and the driver himself.

With just over half the season complete, Busch has performed better at CGR than most people would have expected.  The veteran racer left Stewart-Haas Racing after five seasons and six wins, taking sponsor Monster Energy with him.  Busch’s departure came on the heels of a season that SHR dominated.  The organization won 12 times and placed all four of its cars in the third round of the postseason.  Busch may have accounted for only one of those wins, but there was no doubt that he was leaving one of the top teams in NASCAR behind him.

Meanwhile, Ganassi’s No. 1 team had experienced little success in recent years.  With Jamie McMurray at the helm, the team had qualified for the playoffs for three straight seasons but only made it past the opening round once.  Things got worse in 2018 when McMurray slid all the way to 20th in the final points standings.  At the end of the season, and with McMurray’s contract up, Ganassi signed Busch to a one-year deal.  Landing Busch figured to be a big deal for CGR, but he would still be stepping into a car that had not won a points-paying race since 2013.  The Busch/Ganassi pairing always had the potential to produce good results, but no one was sure going into 2019 if the team would capitalize on that potential.

Suffice it to say that the No. 1 team has exceeded expectations.  Even before his win on Saturday night, Busch had posted 10 top 10s over the course of the season.  He has also been in the top 10 in season-long points every week since the second race of the year.  Stewart-Haas Racing, on the other hand, is yet to win a full field, points-paying race in 2019.

Kentucky was simply the place where everything finally came together for Busch and the No. 1 team.  After showing speed in practice, he spent much of the evening in the top five and was holding on to fourth place in the closing laps.  A late spin by Bubba Wallace brought out the caution that set up an overtime restart, putting Busch right on the back bumper of race leader Joey Logano.  When the race restarted, Busch beat Logano to the outside line in turn one and pulled past the No. 22, drawing even with Kyle on the backstretch.  As the Nos. 1 and 18 bounced off each other, Kurt stayed committed to the high line through the last lap, which gave him just enough momentum to pull ahead of Kyle at the exit of the final corner.

The late caution may have given Busch and the No. 1 team an extra opportunity to win, but the made the most of it.  Credit Busch for staying cool under fire and being able to take the lead after restarting fourth, then holding off his brother just long enough to take the checkered flag.  Also, credit CGR for building a fast car and giving Busch his first win on a 1.5-mile track in nine years.

Additionally, give credit to crew chief Matt McCall, whose own redemption story has played out just in the last week.  McCall took over as crew chief for the No. 1 in 2015 and won his first race on Saturday night, six days after losing a race in one of the most frustrating ways possible.

The end of Daytona International Speedway’s 2019 summer race will not be forgotten anytime soon, especially by McCall and the No. 1 team.  Busch had dodged a major accident on lap 119 and took the lead as the caution flag flew.  The team needed to make one more pit stop before the end of the race, and when NASCAR gave the call for one lap to go before the resumption of green flag racing, McCall brought Busch to pit road for service.  Seconds later, a lightning strike near the speedway forced NASCAR to stop the race.  After several more lightning strikes and a lot of rain, NASCAR called the race as official.  Justin Haley, who did not pit, was the winner.

The truth is that circumstance cost the No. 1 team a win at Daytona much more than any decision by McCall.  He had no way of knowing that lightning was going to stop the race in the short time between the one to go signal and the green flag.  Besides, NASCAR nearly got the race restarted, and in that case, Busch would have been one of the drivers to beat in the closing laps.  But because of the bizarre ending to the race, the No. 1 team left Daytona empty-handed.

It would be a different story with a much happier ending for McCall in Kentucky.  It was his decision to change four tires on Busch’s last stop, which gave the driver advantage on the final restart.  Yes, the four-tire change originally set the No. 1 team back when the Nos. 22 and 18 took two new tires later, but sometimes luck is on your side in racing.  After a weekend of bad luck in Daytona, the No. 1 team capitalized on its good fortune in Kentucky and redeemed itself.  That includes McCall as much as it does Busch and Ganassi.

With the victory on Saturday night, the 31st of his career, Busch is officially heading to the 2019 playoffs.  The No. 1 team still has a lot of ground to make up on the title favorites in terms of playoff points, and just seven races remain before the postseason begins.  But Busch and CGR continue to be one of the biggest positive surprises of the 2019 season.  This redemption story may not be over just yet.

I was glad to see KuBu win. It will momentarily stop his propeller head nose dive to another self destruction. Its only a matter of time. Somehow these GWC finishes screw the driver who had worked his way to the front and makes it a crap shoot free for all for those who couldn’t keep up. Maybe NASCAR could use the Delaware/Dixie lineup for the restarts. That would end the judgement calls on who jumped the restart.

Maybe they should just go back to lapped cars in one lane and lead lap cars in the other. It sucks for someone to have a 2+ second lead and then have the second, third and fourth place cars to be right next to you and up your ass. As you said it allows opportunists to steal a finish they didn’t deserve while conversely robbing someone else of a finish they deserved. A little to arbitrary for my tastes.
It might not be as entertaining but is much more fair to the competitors…. oh yeah, that’s right, entertainment is more important than competition.

Add to that the games played exiting pit road at tracks where there is an advantage to restarting in the inside vs outside lane or vice versa.
I’ve always thought that going along with the Darlington throwback theme, the race should be run with throwback rules (restarts like you describe above, no free pass, no wave around, no stage breaks, no overtime and so on).