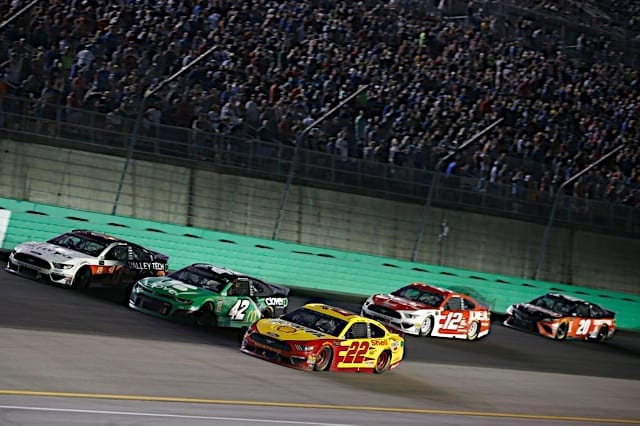 ONE: The Young Guns Are in Danger of Being Lost in the Shuffle

Kurt Busch did more than just win a thriller against his younger brother at Kentucky Speedway. He bumped the average age of this year’s Cup Series winners back up after Alex Bowman and Justin Haley helped lower it. It now stands at 32.6 years old at just past the halfway point of the season.

It wasn’t that long ago, just prior to the 2018 season, that NASCAR was pushing a “youth vs. experience” narrative and touting its crop of Young Guns. The composition of that group depends on who you ask, but if you consider it the crop of Cup Series regulars who were 25 or under at the start of last year, it’s a group of eight: Bowman, Chase Elliott, William Byron, Ryan Blaney, Erik Jones, Kyle Larson, Daniel Suarez and Bubba Wallace. Though Elliott thrilled fans by grabbing his first three series victories, the Young Guns won just five times total, and NASCAR (and FOX, which also went all-in) wisely dropped the storyline prior to the 2019 campaign.

This is worth bringing up because the same group of drivers is now officially on pace to win even fewer races this season, as Bowman and Elliott have the only trips to victory lane among them,a stat made worse by the fact that the likes of Kevin Harvick and Clint Bowyer are off their 2019 pace, which should have opened up more opportunities for them. On top of that, there’s now additional pressure coming up from the Xfinity Series ranks, as the Big Three of Christopher Bell, Cole Custer and Tyler Reddick all look like they are bound for bigger things as soon as 2020.

The natural assumption is that any promotions they earn would come at the hands of the 40 and over crowd, and that may yet prove to the case. But if the last crop of young drivers doesn’t step it up, that’s not a certainty. Would Joe Gibbs Racing, for instance, not at least consider bumping Jones for Bell? Doesn’t Suarez, still winless at the Cup Series level, seem like the weakest link right this moment in the Stewart-Haas Racing stable?

There’s no guarantee that the current Xfinity Series stars will fare any better if given the opportunity. Reddick, especially, feels like he’ll be very much at the mercy of whatever equipment he ends up in at the next level. Still, if this group of eight doesn’t start delivering more victories, there’s a very real chance some of them could be pushed aside as soon as the next Silly Season, and that’s not something most fans and pundits would have envisioned about 18 months ago.

TWO: Kurt Busch Is Not THAT Far From Being a Championship Contender

An underrated part of the Busch brothers battle was that Kurt Busch was one bad break away from winning two consecutive races. His fans don’t need to be reminded, but had he stayed out before the lightning and rain hit at Daytona, it would have been him and not Haley celebrating in the makeshift indoor victory lane.

It’s fair to ask then: Is Kurt Busch a potential championship contender? Even without that second win, he’s been remarkably consistent, tied for sixth in standard points (with Martin Truex Jr., not too shabby) and tied for third with three other drivers with 11 top 10s. He hasn’t had a DNF yet either, one of only four projected playoff participants who can say that.

Working against him is that he hasn’t run up front all that much, leading just 80 laps on the season. That’s less than 10% of Kyle Busch’s total, and only Jones and gulp, Jimmie Johnson, have spent less time at the front of the field among the projected playoff field.

The gut feeling here is that the laps led stat is the most telling, and that right this second, Kurt Busch would have to be considered an underdog to make it to Homestead. He still has plenty of time to change that, though, and if he can snag another victory or at least some more stage wins before the end of the summer, his playoff resume could end up looking pretty good by Vegas, which just so happens to be his hometown.

The No. 6 Roush Fenway Racing Ford has fallen a long, long way down the totem pole since Mark Martin used to wheel it, but Ryan Newman has at least restored it to respectability — though maybe not visually every week, depending on how you feel about the Oscar-Mayer paint scheme. By finishing ninth at Kentucky, Newman now has four top 10s in the last five races, his best stretch of the season to date, and his lengthy streak of races without a DNF is getting close to 50.

Newman hasn’t been running up front, leading less than a lap per race on average, so he’s no title contender. But considering how poorly this particular car has performed in recent years, finishing better than 22nd in the year-end standings just once since Martin last drove it in 2006, Newman probably isn’t getting enough credit for helping to turn things around.

He’s certainly validated Roush Fenway’s decision to hire him instead of turning the ride over to another young or unproven driver. At 41, Newman can’t have too many more years left in his Cup Series career, but he’s righted the ship for whoever next takes the reins for the No. 6, and that’s an achievement in its own right.

More than one tweet made the rounds after Daytona noting that at the halfway mark of the season, Kaulig Racing had more wins than Stewart-Haas Racing. Another week has passed and nothing has changed. Suarez showed his practice speed was no fluke, leading 52 laps before finishing eighth, while Bowyer got a solid sixth-place result that he really needed. Aric Almirola came home 14th and Harvick 22nd, and while you can shuffle the drivers around a bit from week to week, Kentucky was kind of a microcosm of the season as a whole at SHR.

It was a point of pride that all four Stewart-Haas Racing cars made the playoffs last year, and a deserved one at that. Even without a win, the same thing could easily happen this year, as Suarez is certainly within striking distance of getting into the field on points, and the other three cars are fine unless the current trend of first-time winners keeps up all summer. It’s more of an indictment of NASCAR’s postseason format than a reflection of great performance this time around.

But then what? It’s hard to take any of the SHR entries seriously unless and until they start winning again. They aren’t even winning stages — the team has just four stage wins, all by Harvick. It’s an abrupt fall-off from 2018, and one that shows few signs of a reversal. Questions are going to continue to be asked until the organization gets things figured out, and if the answers aren’t there, some interesting decisions will follow after Homestead.

FIVE: The “One” and Only

NASCAR fans sometimes get understandably upset about the title sponsorship carousel wreaking havoc on races with historic and memorable names, like the summer stop at Daytona that used to be called the Firecracker 400, and then enjoyed a nearly 20-year run with some form of Pepsi in the name before Coke came to call. Then there are other races with essentially no history of consistent naming conventions and thus no emotional attachments to them, and the upcoming stop at New Hampshire Motor Speedway is one of those.

The Foxwood Resorts Casino 301 will be the 27th running of this particular event, which has had 11 different names over that time. On the plus side, it will at least have the same title sponsor for the second consecutive year after rotating through new ones each year from 2015 to 2018.

Since NASCAR and the tracks are very much in a “beggars can’t be choosers” situation with regard to race sponsorship, this is something of the new normal in the sport. It gets harder every year to hear the name of a race and associate it with the track at which it was held, with a few notable exceptions like the Daytona 500 and Southern 500 (plus the Brickyard to a certain extent, even with sponsors doing their best to ruin that one too).

Happily, New Hampshire does have something going for it that no other track has: an extra lap. Back when Lenox Industrial Tools held the naming rights, it added one more lap to the traditional 300 to symbolize the “extra mile” its customers went while using its products. The gimmick has stuck around for every sponsor since, and as long as that doesn’t change, we’ll always be able to tell when Loudon is coming up no matter how many times the name keeps changing going forward.

Big $$$ sponsors are going to determine who gets to drive where next year. Just the way it is.
Poor Harvick, all those wins the last few years with a cheater in house made part and no wins now. Not another winner in the SHR stable. If Custer has any sponsors he’s coming up cause Bowyer has practically no sponsors and hasn’t been much of a winner his whole career. Good talker though, just like Mikey.

You’re 100 percent right RE: sponsors, but unless SHR isn’t trying as hard to find sponsors for Custer, he doesn’t look like he’s bringing a ton of money to the table either as his car has Haas on the hood most weeks. Despite being by all accounts a good guy, Custer admits he’s pretty soft-spoken so he doesn’t feel like he’d be a slam dunk for companies to want to back him at the Cup level even if he can win there.

Bowyer’s foul mouth is not the one that most sponsors want on the family TV.

Most of these young guys had parents writing checks and it mattered in lower divisions. Now they are in equal equipment and are short on talent.