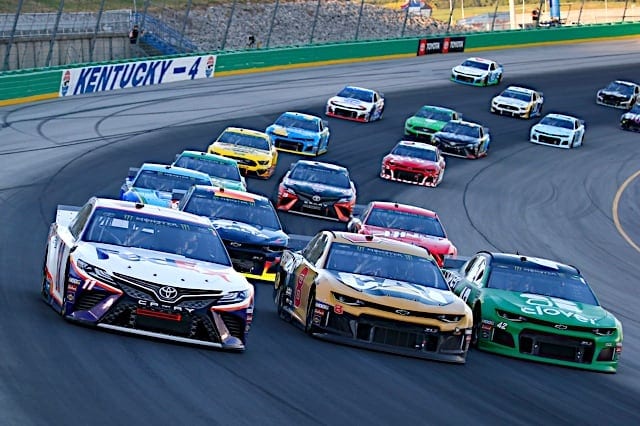 When talking about great races, a lot of people bring up the 2003 Southern 500 as a gold standard. It’s the closest finish the sport has seen to date. There’s not a thing that brings fans to their feet better than a hard, clean race for the win where the victor prevails by a car length or less. Not every race can end like this, of course, and that doesn’t make them terrible races — some of my fellow Frontstretchers join me in explaining what else makes a memorable race below. But a compelling finish is a surefire way to make fans remember the event for years to come, as they will the most recent race from Kentucky Speedway.

And while some people might argue that a great ending doesn’t make up for the rest of the race if it’s not compelling … what do you remember from the 2003 Southern 500 other than that great battle to end it? Yeah, me either.

“Good storylines also help. Has Joe Smith been running so poorly he might lose his ride next season? Then he needed that fourth place. The midpack team of Gray Squirrel Motorsports has been running amazing the past few weeks, digging into some of the reasons for that. Wondering why Palmetto Racing isn’t living up to their years of tradition. Silly season speculation is another way for racing to stay interesting” — Wesley Coburn

I’ll take this one step further. As a fan, you want to see your favorite driver win, and if he can’t, you probably have a couple others next on the list. If they run away with the race, you still remember it as a good one, especially if you were there, because that’s your guy. That’s an absolutely legit reason, too. The same finish with a driver you pull for is infinitely better than when it’s someone else.

Also, fans know when they’re seeing something special. As a writer, I’m not rooting for any driver, but I’d be lying if I said I didn’t love a good story to tell. Jeff Gordon’s final win at Martinsville comes to mind. On the verge of retirement, Gordon won one more time at a track where he had dominated during his career, igniting title hopes in the process. And while Gordon was once one of the drivers fans loved to hate, that night, they understood what they were seeing. It took a long time for the stands to empty that night as fans soaked in one last win from a warrior. Last wins and first ones are always something special to see.

3. The crashes … or something to shake things up

“For the casual fan, it’s wrecks, or the possibility of them. The likely chance of vicariously taking part in imminent legal violence is the same reason people watch football or MMA fights.

AS much as I’d like to say Wesley is wrong about the crashes, he isn’t. Nobody wants to see a driver get hurt (and if they do, they’re no fan), but crashes shake things up, maybe by taking out a contender (or, in the case of Daytona or Talladega, a dozen) or by creating an unpredictable restart.

As for attrition, yes, and racing needs more of it. The unpredictability of risk vs. reward is lacking. When two teammates would lose engines, you’d be on the edge of your seat to see if (when) it would happen to the third. Fuel mileage might cut a winning bid half a lap short. Ditto mechanical failure. The most memorable piece of Derrike Cope’s Daytona 500 was Dale Earnhardt’s cut tire on the last lap.

Predictable is boring, and the more unpredictable a race, the better.

“I do enjoy watching and learning about different calls drivers make on our road: four tires, two tires, or fuel only. Sometimes that can help what would have been a dull race.” — Joy Tomlinson

I find some mileage races to be nail-biters at the end. Pit calls can make or break a team’s day. Strategy alone doesn’t make a race great, but it can certainly set up a finish that does. ‘Nuff said.

The longer I spend in the sport, the more I realize that the journey is what makes every race special. To see it all in person, to watch a race with great friends or family, to celebrate a fleeting youth — that makes it great. Some of the best races I ever saw probably weren’t all that great on TV, but sitting in the stands with the best people, savoring every moment, dreaming of the day when I’d get to do what I get to do now … that made those races as good as, maybe better than, any race I’ve seen since. When the stands were packed (it really wasn’t so very long ago), those around you were friends for a day.

Finally, every race has one perfect moment. It doesn’t — can’t — last, but that moment when the pace car drops off the track and the field bunches up to take the green flag is everything a race can and should be. The moment holds infinite possibility. Anything can happen, anyone can win. It’s perfect. At the end of the day, I will never get tired of it, never not want to be there. I can’t think of a single race, among the hundreds I’ve seen either in person or on television, that I wish I hadn’t seen when it was over. They might not all be great, but they all have great moments.

The road course strategy used to be a big part of winning the race…or not. Unfortunately, with the ‘stage racing’, predictable yellows have all but eliminated this strategy.

Carl Edward’s first win at Atlanta always comes to mind for me. A great finish and the signature back flip catapulted him to being a super star.

And then there’s the NASCAR formula for a great race:

So basically you’re saying that NA$CAR is giving the TV networks who paid incredibly excessive fees multiple chances to recoup SOME of their money during each event? Maybe that means when they pay less for their next contract there will be fewer commercial breaks. Maybe not.

IMO the TV networks overpaid (but then, hindsight is 20/20). Point is, I think they’re overdoing it – to the extent of modifying the racing to manufacture commercial breaks (see stage racing requiring caution laps/stop in on-track action). Problem is, they clearly don’t need all the extra advertising time because the last race I watched showed the same 3 or 4 commercials during every break. I don’t need to see the Mobil1 commercial with a tiny Kevin Harvick on the shelf 20 times in 4 hours.

Anyway, they are free to do what they want with their money and their product, and I am free to criticize the decisions I disagree with – as well as spend my time/money on non-NASCAR things if I don’t like the product they are selling. At this time, there is more I don’t like about the NASCAR product than I like, unfortunately. Empty seats, smaller fields, sponsorship troubles even for big name teams/drivers, and limited opportunities for rookie drivers, new teams, and even new sponsors all indicate I’m not the only one dissatisfied.

I have to admit that I find it amusing when a track that has had years of lackluster racing finally produces a race with at least an exciting finish. The media immediately proclaims that the latest ‘package’ has changed the course of races at the track forever! Going on the theory that even a blind squirrel finds a nut occasionally, this makes me chuckle out loud. I guess the desperation is showing.