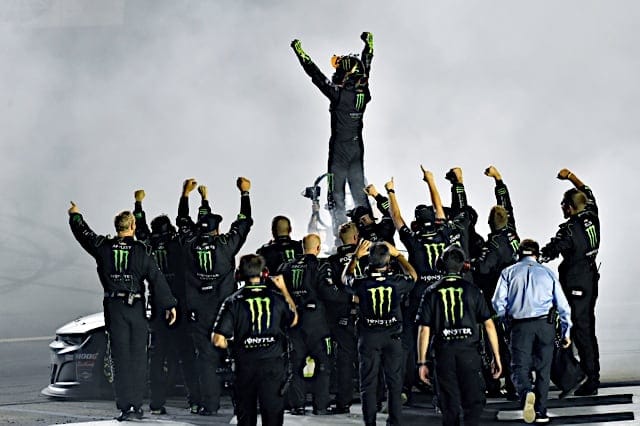 All three NASCAR national series were at Kentucky Speedway last weekend, and it was a bit of a mixed bag.

The Gander Outdoors Truck Series was a wreckfest with plenty of drama, with trucks wrecking and running out of fuel, hats flying while tempers flared, and a rookie driver getting his first win.

The Xfinity Series race was a straggly parade with only five cars on the lead lap at the end, as NASCAR Twitter was more absorbed in the news that the Oklahoma City Thunder’s Russell Westbrook was traded to Houston.

The Monster Energy NASCAR Cup Series race was a little of both. There were long green flag runs throughout, and according to those at the track, the racing throughout the field was fantastic, but those watching on TV nearly fell asleep. The final laps saw a battle for the lead, and then an overtime shootout between brothers proved a good boost for fans of sugar, with the drivers involved sponsored by Monster Energy and M&M’s.

Kurt Busch. In his first season for Chip Ganassi Racing, he picked up Chevrolet’s first Cup victory at Kentucky and the manufacturer’s third straight win, locking himself firmly into the playoffs for good measure. It was the 31st win of his 19-year Cup career, and his fifth top five and 11th top 10 through 19 races. He has an average finish of ninth, which isn’t bad either.

Austin Dillon. The Richard Childress Racing driver finished next to last in 35th on Saturday night after spending time in the garage with issues, but it’s been a brutal stretch for the driver of the No. 3 Camaro. Since Charlotte, he’s had three crash-related DNFs, along with finishes of 34th, 37th, 26th, 24th, 10th, 33rd and 35th. For the season, he has two poles, three top 10s and an average finish of 20th. He’s mired back in 22nd in the standings.

Erik Jones, who crossed the finish line in third. Since leaving Talladega, the Joe Gibbs Racing driver has six top-10 finishes, which gives him five top fives and nine top 10s for the year so far. He’s also scored top 10s in all three Cup races he’s run at Kentucky, with a worst finish of seventh. He also has a pole, three top fives and four Xfinity top 10s in five races, and he was the runner-up in his only Gander Outdoors Truck Series start at the track.

Jimmie Johnson. He finished 30th on Saturday night, the fourth time this season the Hendrick Motorsports driver finished on the wrong side of 20th. The seven-time champion has just three top fives and eight top 10s, though he’s on track to improve from his 2018 numbers. Still, he’s averaging a 14th-place finish, and he’s just 10 points ahead of Ryan Newman, the first driver outside of the playoff bubble at the moment.

Chris Buescher. The JTG-Daugherty driver finished in 10th, his fourth top 10 of the season, which are great stats for a midpack team. More importantly, he’s rattled off 13 finishes inside the top 20, including the past eight events in a row.

The good news for Bubba Wallace is that he’s been more consistent, with the only two DNFs coming at Daytona and Talladega, where crashes happen to everyone. Also, the season is slightly more than halfway finished. That’s about it for the Richard Petty Motorsports driver, who has just three top-20 finishes this year and an average result of 26th. He’s way back in 28th in the standings.

Kevin Harvick‘s Stewart-Haas Racing No. 4 Ford Mustang was wrapped in the colors of longtime sponsor Hunt Brothers Pizza this week, a longtime Xfinity Series sponsor who recently jumped up to Cup. That doesn’t happen all that often, so it’s cool to see. And it’s a simpler, clean look that works well.

Also, Hunt Brothers Pizza is pretty good as far as gas station food goes. It made things easier during college weekends when food needed to be switched up, since it was sold at the gas station within walking distance.

GMS Racing got a lot of really good pictures at the racetrack this weekend.

Drivers are also hoping that our Frontstretch colleague Dustin Albino can get a full-time gig covering motorsports.

Roush Fenway Racing had a sold night, as both of their drivers finished in the top 15.

It’s off to New England as the MENCS and Xfinity Series head to the flat, one-mile New Hampshire Motor Speedway this weekend.

The Lakes Region 200 will be Saturday, July 20, going green around 4 p.m. ET, with TV coverage on the NBC Sports Network. Christopher Bell is the defending race winner, and he seems like a solid pick to repeat.

The Foxwoods Casino Resort 301 will be Sunday, July 21, going green around 3 p.m. ET, with TV coverage on the NBC Sports Network. One of the shortest races on the Cup Series schedule, in my opinion, is just about the right length. While Harvick is the defending race winner, he’s also the only driver not in Joe Gibbs Racing equipment to win there in the past seven races.