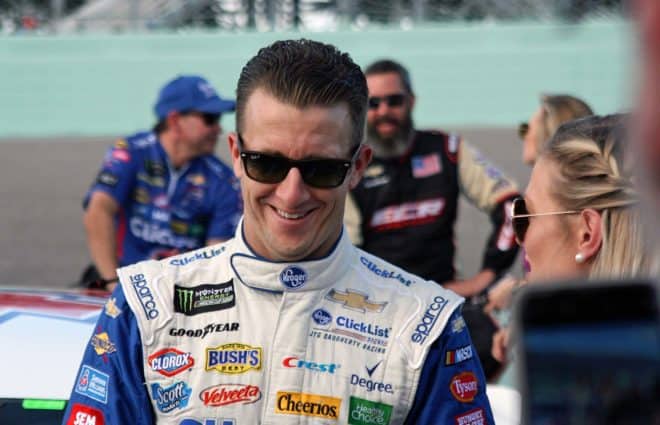 AJ Allmendinger will be adding a fifth race to his 2019 NASCAR Xfinity Series schedule with Kaulig Racing, the team announced with a Twitter video on Wednesday morning (July 17).

This extra race will be the Zippo 200 at The Glen at Watkins Glen International on Saturday, Aug. 3 (3 p.m. ET on NBC).

Yes, it’s happening! @AJDinger is on the @NASCAR_Xfinity Series entry list for @WGI!

“I’m pumped to get to go back to one of my favorite racetracks, Kaulig Racing’s given me the opportunity, and I’d also like to thank NBC Sports for allowing me to show up and drive race cars,” Allmendinger said. “Ready to go try and grab a victory. Watkins Glen, I’m coming for you.”

Running in Kaulig’s second car, the No. 10 Chevrolet Camaro, Allmendinger led 33 laps and finished third in Daytona, but was disqualified due to failing post-race inspection.

In his stock car starts at WGI, Allmendinger has a runner-up finish in his only Xfinity start, piloting the No. 23 Chevy for GMS Racing in 2018.  He also has a win, three top five and six top 10 finishes in 10 Monster Energy NASCAR Cup Series starts at the track.

Allmendinger will likely be driving the No. 10 at WGI, which has also been piloted by Ross Chastain, Austin Dillon and Elliott Sadler. That team is 26th in the NXS owner standings out of 46 total teams, tops among part-time teams with 202 points through eight races.

Wesley has been with Fronstretch since October 2017. He loves well-told stories in whatever format he finds them. Aside from NASCAR, he enjoys reading, country music and OKC Thunder basketball. He has a BA in Liberal Arts/English and currently lives in eastern Oklahoma, where he works as a freelance writer/editor.
@@CoburnWesley
Previous Entry List: Lime Rock Park 120
Next 2-Headed Monster: Does NASCAR Need To Eliminate Playoff Waivers?