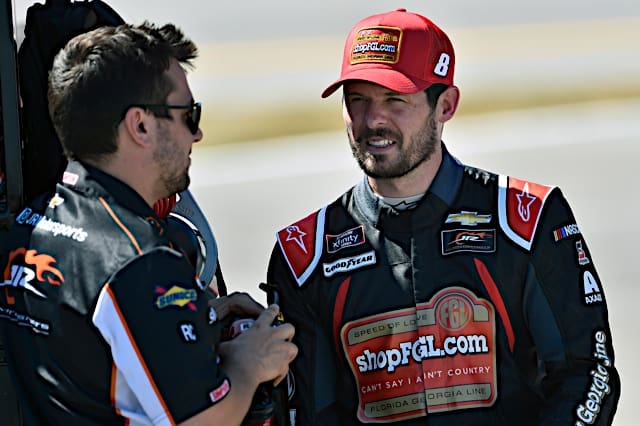 After years of failing to find the right full-time fit, Ryan Truex finally found stability in his NASCAR career two years ago. A season-long opportunity came in 2017 with Hattori Racing Enterprises in the Gander Outdoors Truck Series and 2018 was spent chasing a NASCAR Xfinity Series title with Kaulig Racing.

Come 2019, that stability was obsolete.

Truex, 27, has been put through the NASCAR ringer over the past decade. The New Jersey native has run with the likes of the Joe Gibbs Racing juggernaut and, at times, start-and-parked for small organizations who have since vanished from the sport.

In the first half of the 2019 NASCAR season, Truex has two Xfinity starts for JR Motorsports, finishing runner-up to Kyle Busch in March at ISM Raceway and most recently crossing the finish line eighth at Kentucky Speedway. Ultimately, he’s making the most of his limited opportunities in the No. 8 Chevrolet, though Truex said it’s difficult hopping in and out of the car every few months.

“It’s not just hard on me, it’s hard on the team, too,” Truex told Frontstretch. “They have like eight different drivers in this thing this year. Every driver has a different way of explaining what their car is doing.

“I feel like we got lucky at Phoenix where everything fell perfectly. It’s tough for everybody, and when you’re racing against guys like [Cole] Custer and [Christopher] Bell, guys who are now in their second year of being in good equipment and having good people around them and have been building those relationships, you can’t replace that — week-in, week-out, being in the car, growing as a group, with anything, really.”

Being one of the top Xfinity organizations, JRM is having an average season. Michael Annett won the season opener at Daytona International Speedway, while Justin Allgaier has been bitten by bad luck and Noah Gragson is still learning as a rookie driver. Because of the success JRM has shown — winning the past two championships — Truex believes running the No. 8 is the biggest opportunity of his career, though it does come with added pressure.

“I’ve never doubted that I can go out here and win races,” Truex added. “I’ve come close in Trucks and I’ve come close in Xfinity, one spot away in both more than once. I know I can do it and I believe in myself. It’s definitely been tough and I’ve been close to having the perfect situation and having everything align. A lot of times, I’ve had the rug pulled out from under me, whether it’s a sponsorship issue or something else out of my control that’s kind of blindsided me.

“A lot of these years, I’ve had deals that I thought were close to run full-time the next year, and come October, November, they would fall apart and I’m kind of chasing my tail and having to go find something to do to keep my name relevant and stay relevant. I thought that was going to be the case again this year, but I got lucky enough that JRM had the [No.] 8 car open and they are willing to let me come run some races for them.”

With the pair of top-10 finishes, Truex admits confidence isn’t an issue with him. It never has been. But finishing well in the part-time starts allows the driver to build for the next race, even with all the challenges it presents.

While Truex has been on the sidelines this season, he’s used the stories of Ryan Preece and Ross Chastain as motivation. In 2017, Preece borrowed a loan from a bank to get a two-race deal in the Xfinity Series at Joe Gibbs Racing. In those races, he finished first and second respectively. The success led to two more races and two more top-five finishes.

Chastain, on the other hand, has been outrunning where his equipment should be finishing for years in all three national touring divisions, which led to a three-race opportunity last season with Chip Ganassi Racing. In those three races, he had two top-two finishes, while winning the pole and leading the most laps at Darlington Raceway.

This year, Truex is betting on himself, believing his talent can get the job done behind the wheel and hoping a full-time opportunity comes along for 2020.

“I felt like this was my best opportunity in a while to align myself with a team that I feel like I can show up to the track and have the equipment and have the ability to win. I think it’s been a bit of a learning curve this year. It’s to prove that I can do this, and hopefully, the stars align this year that I can do that.”

But being away from the track on a consistent basis has been tough for Truex.

Winning would be nice, but Truex wants to prove he can get the job done in top-tier equipment.

“The ultimate goal is to win races,” Truex said. “Aside from that, I want to do everything I can to not make mistakes and do everything right and keep my equipment clean. Even if I can go out and run top five in every race, I think that proves a point.”

Fluff pieces for years regarding this nasty piece of work. Non producer, he must be super cheap. For years he has been floating around…with zippo results to justify his existence. Nobody else out there to invest in other than this POS? It seems to run in the family/roommates. My opinion of course.

Marty got on his knees and begged jr . Marty does the same at frontstretch once a month it seems.