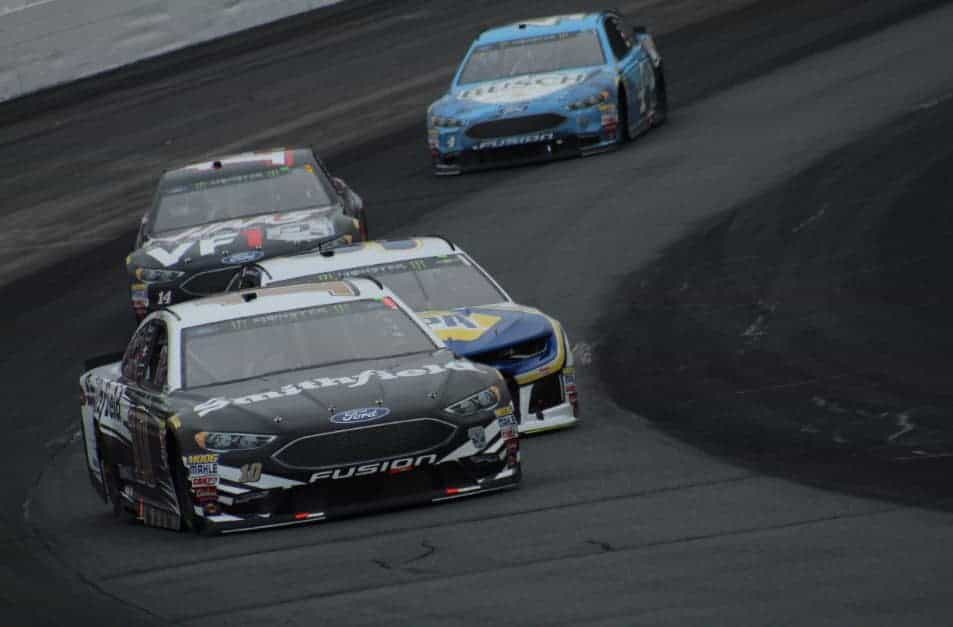 I am not shy to say I have a love/hate relationship with New Hampshire Motor Speedway. Every time NASCAR comes back here, I think of tragedies six weeks apart. It’s horribly unfair to the folks at the Magic Mile, but those two deaths coming so soon and taking two of my favorite guys in racing shocked me to the core. Those events also spawned an article here during the early days of Frontstretch that earned me my first national interviews when I looked into the safety issues in NASCAR. So forgive me if I am less snarky than usual this week because Adam Petty and Kenny Irwin Jr. will always be missed.

What Makes a Great Race

Amy Henderson had a great article here on Frontstretch earlier this week talking about the five ingredients that go into making a good race and that got me thinking: what does make one race better than another? That is sort of like asking me what kind of pizza is best, because depending on my taste buds on any given day that might change.

But personally, I like to see great close racing for the lead and guys actually able to finish a pass. I prefer to see tires that go away that leads to strategy plays actually working, where some guys go out fast and others come on late in the run — some guys pit one extra time and others run their car down to the fumes on old tires.

The finish of a race does leave that last great taste in your mouth, but to me, even a 10-second win by someone could be considered a great race under certain circumstances. In the short attention span world we live in nowadays, it seems like the races that get the most votes for a great race in any particular year have a stunning wreck late in the race.

Every race fan has a unique idea of what makes a great race, and that is one of the big joys of racing. One of my favorite races to cover in person was when my last favorite driver Mark Martin won at Chicagoland Speedway (I haven’t allowed myself to adopt a new favorite racer since I started covering the sport as a semi-professional). One of my favorite races I attended as a fan in NASCAR was the infamous “I was only trying to rattle his cage” race at Bristol Motor Speedway when Dale Earnhardt wrecked Terry Labonte for the win in 1999. It was more the after-show than the actual race that makes that one memorable.

Give Amy’s article a read and see if you can come up with your own personal five reasons of what makes a great race, because it’s harder than you think.

If I was to allow myself to adopt a new favorite race car driver during my professional era of covering the sport, it would be Andy Seuss. I first met this young man when I was covering a late model racing series at Fairgrounds Speedway Nashville and needed some information on the modified guys racing that weekend for an internet radio broadcast play-by-play of the event.

One of the young racers that impressed me that day back in 2007 was Seuss, who was super smooth and super fast. Seuss was also super nice, and my sources up in New England that had covered his career told me about this young rising star. My sources also told me that Seuss’ mom also served the best lunch at the track, and let me tell you, that is very true too.

Seuss is an old-fashioned racer who has made it to this point in his career based on talent, not a huge checkbook. This business can change people’s personalities really badly with fame going to some racers’ heads and disappointment making others very cynical. Seuss is the same nice guy that he started out being when he first got into racing, and trust me when I tell you very few racers with his amount of talent have dealt with the disappointments better than Seuss. This man just loves to go racing.

Earlier this year, he wheeled a very old chassis to the top of the speed charts during an ARCA Menards Series practice at Daytona International Speedway. Whether it is a ground-pounder modified, a stock car or anything else on wheels, the one constant in Seuss’ career is that he always gets more out of the car he is driving than anyone else can get out of that race car. Keep an eye on Old-Time-Racer Andy Seuss this week at New Hampshire as he races in the Monster Energy NASCAR Cup Series in his home state.

I thought I had the winner pick covered last week at Kentucky Speedway, but the other Busch brother beat me after that late caution flag ended Logano’s chance to win. Earlier in the race, it looked like my long-shot pick Hamlin was going to get it done, too.

This week, heading to New Hampshire Motor Speedway, the 1-mile flat oval is more like a short track on steroids with the tight corners allowing for some beating and banging late in the race. This could be the track where Kevin Harvick finally gets that elusive win since he has won twice in the last five races here with only one finish outside the top five. The Joe Gibbs Racing dynamic duo of Busch and Truex Jr. are also tough being the only two drivers to score more than 200 points over the last five races here.

Win: Harvick – Can he have a trouble free race and get his first win of the year?

Place: Busch – Doesn’t pay to bet against Kyle on any track.

Show: Truex Jr. – Usually bounces back from a bad race.

Long Shot: Kyle Larson (30-to-1 Odds) How can you let this guy go off this high?

The Magic Mile is in Milwaukee.

How come nobody complains about the races at New Hampshire when its the Mofifieds?

Don,
The Modifieds are the BEST races at NHMS. Better than trucks, Xfinity and Cup. Modified racing at Loudon should be televised live! It is awesome every lap!

I think the Cup drivers should race in Modofieds! Real “race” cars!