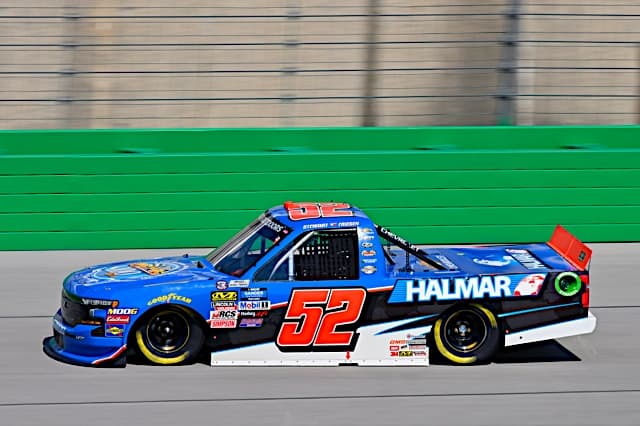 Penalty day came and went this week, and it turns out Stewart Friesen dodged a bullet. NASCAR announced the No. 52 team wouldn’t face any further penalty.

During opening day inspection at Kentucky Speedway last week, Friesen’s primary No. 52 Chevrolet was confiscated and the team was forced to pull out its backup truck.

Firewall issue on the Friesen truck, according to NASCAR. No one ejected from the team. Penalties TBD — possibly not announced until next week — pending further discussion among NASCAR officials. The truck sits outside the #NASCAR hauler. pic.twitter.com/cWfjjQFsc0

While no one was ejected in relation to the issue, Friesen did have to start at the rear of the field Thursday night. But despite that setback, he recovered to a runner-up finish by the time the checkered flag flew.

NASCAR then took the primary truck and the truck Friesen raced back to the R&D center for further evaluation. Following the teardown process, it was determined that no further penalty for the team was necessary and the at-track penalty of starting at the rear of the field was sufficient.

According to NASCAR.com, the team was given the option to make the necessary changes to the truck but was unable to at the track.

I don’t pretend to understand all facets of the series’ rule book, nor do I completely understand all of the technical aspects of setting up the trucks. But what’s clear in this situation is that NASCAR found something it didn’t like in opening-day inspection and sent a message to the team by taking the entire truck. My assumption is that because the issue was found in opening inspection instead of elsewhere in the weekend, where it could have potentially presented an advantage, Friesen got off lightly.

Nascar says the Friesen truck violated section C of this rear firewall rule. These changes (the highlighted portion) in the rule were from April, I believe: pic.twitter.com/C7yTkZmw4G

Someone managed to grab a photo while the truck was on display and attempted to explain exactly what the issue may have been.

Green Arrow – You can see how low the sheet metal is here.

Red Arrow – It appears the rear “firewall” doesn’t have enough angle in it which would indicate the lower part runs farther back than it should.

It’s difficult to really know without measurements but that’s what I see. pic.twitter.com/MXSO45GS2M

What stands out more in this instance, though, is how forthcoming Friesen was after the race last Thursday night when he was asked about it on the SiriusXM post-race Dialed In.

“It was a crazy day. Rolled in the garage this morning expecting to get to work,” Friesen explained. “I’m looking down the line and our truck is not behind our trailer. That’s not good. It’s a pretty scheduled regimen.

“The truck didn’t live up to what NASCAR wanted it to be. I learned a lot today about different things that I don’t really care to know about on our end of it. To come out of it with a second place, big thanks to my guys for busting their butts again.”

At the time of this interview, there was no word yet on what, if any, penalties might come from the truck, but Friesen was “obviously” concerned about what could come.

“There could be fines, points, suspensions, all of the above and that’s up to the powers that be,” Friesen said. “Brad Moran is a great series director and fellow Canadian, and he’s been great to me since I started in the series. It is what it is.

“I haven’t gotten to talk to him personally about it, just through Trip [Bruce, crew chief]. For me, I’m just trying to gather as much information as I could. Obviously, I have to pass that along to my boss, people at Halmar and relay the message all day long.”

The good news for the No. 52 team is that it had a stout backup truck available to roll out for the race.

“We’ve been racing this backup for it seems like a month,” Friesen said. “Good thing we had some depth to start the year. It still had the rubber all over it from Chicago last week when we rolled it out.”

Obviously, post-race there were still plenty of questions about the primary versus the backup and what actually happened that caused NASCAR to confiscate the primary in the first place.

But where does Friesen go from here?

“This is serious business,” he continued. “Obviously Halmar invests a lot to let us compete at this level, and there’s a lot of questions there. There’s gotta be a lot of questions going on with Maury Gallagher, Mike Beam, the guys in charge at GMS.

“We just gotta figure things out and figure out what went wrong.”

It’s not often you get such clear, open, honest answers from a driver when they’re on the receiving end of a less-than-positive situation. Kudos to Friesen for having the nerve to do so.

While it still seems like there are more questions than answers, in this case, the bottom line is that the No. 52 team dodged a potential bullet in its efforts to make the playoffs. And though they don’t have a victory yet, as long as they can continue to run strong and there aren’t three more winners, Friesen will have a shot to run for the championship just three races from now.