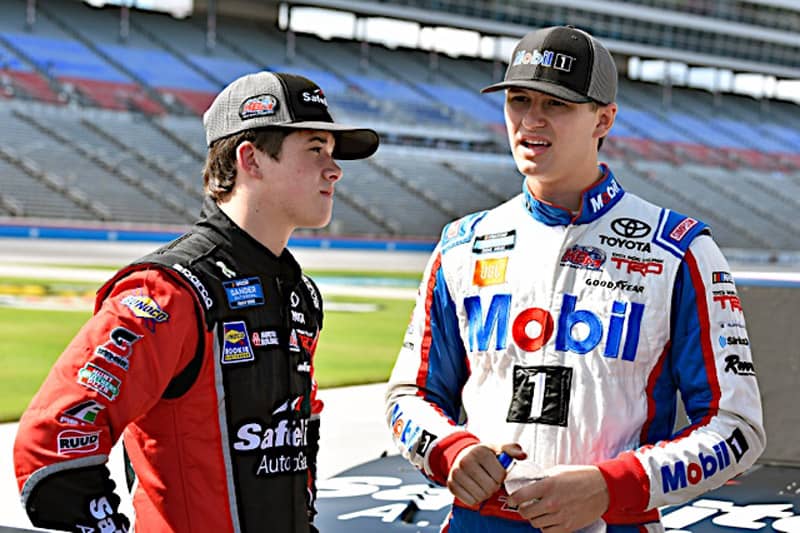 .@KyleLarsonRacin is set to return to @CGRTeams' No. 42 Chevrolet next season, per sources, despite some suggestion that he could land elsewhere.

➖ Meanwhile, Larson's teammate, @KurtBusch, remains in negotiations to extend his stay in the No. 1 Chevrolet for 2020. pic.twitter.com/6MZ2J2bWGd

With Kyle Larson probably staying put at Chip Ganassi Racing, one huge piece of this year’s Silly Season puzzle has found its place.

Larson has largely struggled this season, usually having one good race being ruined by two or three bad ones immediately following. But he’s still one of the brightest potential stars on the circuit, one of the few on the free-agent market who has the talent to be signed even without a sponsor. Now, with him off the table, there doesn’t seem like there will be much movement around the garage.

Kurt Busch could still leave CGR but why should he? He has the third-best average finish of all the drivers on the circuit, he and crew chief Matt McCall seem to have chemistry, and now he’s winning races. Why go? Where would he even go? The only comparable team with possible openings is Stewart-Haas Racing, and he’s not going back there after a year.

As far as SHR, who really knows what is going to happen there? There have been no real rumors about Clint Bowyer being on the hot seat the last few weeks, and this is usually around the time when moves start to happen. And even if he is, they’d be dumb at this point not to just promote Cole Custer up rather than go fishing for another Cup veteran.

Ross Chastain should be on a lot of team owners’ radars after the past 11 months. His best bet at a decent Cup ride would be a CGR expansion, but that doesn’t happen without sponsorship. Christopher Bell said a couple of weeks ago that he’s signed an extension with Joe Gibbs Racing for next year. Front Row Motorsports usually only signs drivers to one-year contracts, so who knows what’ll happen over there.

As far as teams closing up, really the only team I can picture doing so is Richard Petty Motorsports, in spite of the constant denials of the team. And even then, that charter the team owns is very valuable and it just going to find a new home on a better team.

What happened to the spices of life?

Know what was great about NASCAR at the turn of the millennium? It wasn’t just Ward Burton, it was the variety of teams able to win every week.

A lot of drivers could win every week now. Bowyer could very easily win this week at New Hampshire Motor Speedway, and he’s 14th in points. But there used to be so much more variety.

We used to be able to have these smaller teams nail the setup on Friday and unexpectedly compete on Sunday. Johnny Benson once won a Cup race with MB2 Motorsports in 2002. Robby Gordon, Bill Elliott, Joe Nemechek and Bobby Hamilton all won races in 2001.

In 2002, eight organizations won Cup races in the first 19 races. In 2019, that number has dwindled down to four, and one of them was the flukiest winner in NASCAR history, so it’s really more like three. 13 drivers visited victory lane in those 19 races in 2002, while in 2019 that number is down to just nine.

The secret to making racing an appealing product for the television audience again isn’t just to have strong personalities or good racing. It’s to have a varied pool of strong personalities who can win along with some good racing. Fans like Bubba Wallace, but he isn’t going to make a big difference when it comes to attracting fans until he starts being consistently competitive.

What can NASCAR really do to fix this? Nothing, really. They’ve already put a four-car cap in place and I personally don’t think we’ll ever see a team use more than three charters again outside of the three grandfathered-in teams.

Who will master the Magic Mile?

New Hampshire Motor Speedway, known casually as Loudon to most involved in the industry, is the only NASCAR Cup track in the northeast and this week marks its only date on the schedule.

The flat mile hearkens back to the older days of racing in a sense. Back in “the day”, most tracks on the schedule didn’t have much banking. Martinsville Speedway is really the only other oval on the circuit now as flat as Loudon.

Defending race winner Kevin Harvick is still looking for that first win for both himself and SHR in 2019. SHR has enjoyed a lot of success over the years at Loudon, having won four races in the last eight years. Bowyer in his own right has won two races at Loudon.

Outside of and including Harvick, it’s the usual suspects. Kyle Busch is pretty good and hasn’t won recently, so it should be about time for him to do so again. Joey Logano has won at Loudon and he always tries to have a great race in front of his home crowd. Ditto with Martin Truex Jr.

So what’s up with KBM?

I’d like to congratulate Todd Gilliland and Harrison Burton for doing the unthinkable.

I know there are three races left until the NASCAR Gander Outdoors Truck Series playoffs. But why should I or anybody really have any faith left that either of these two is going to win and make it in?

This is Kyle Busch Motorsports equipment. This is top of the line Toyota power. Greg Biffle won a race in this stuff after a two-year layover and made it back home in time for the morning senior citizen discount at Golden Corral.

Gilliland has led 39 laps in 13 races this year. His average finish is 12th. How is this possible in a KBM truck? A watermelon farmer driving for some team called Niece Motorsports didn’t declare for points until May and he’s in a much better position to get into the playoffs than Gilliland.

Last weekend, Tyler Ankrum, a guy who started and parked two races this season, won with a KBM satellite team and has all but clinched a spot in the playoffs. And at least Burton is fifth in points, which is pretty good for a rookie. But it’s not looking too good for Gilliland right now.

At this point, it’s more humiliating than anything. Go and compare these two with Bell or Erik Jones when they first started with KBM, and it’s no contest. Granted, we can’t all be those two, but that’s why I’m not in a KBM truck.