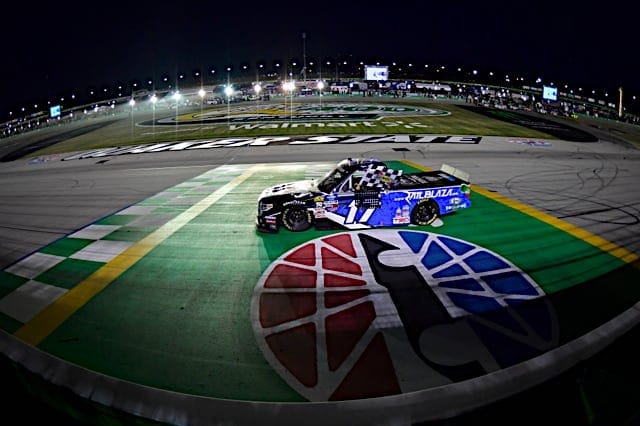 Kurt Busch openly admitted to some retirement consideration prior to his win last week. Who hangs it up first: Jimmie Johnson, Kevin Harvick or Busch?

Joy Tomlinson: My first thought is Jimmie Johnson since his last Cup Series win was over two years ago. He and his new crew chief seem to have started working together better now, so he might get a win this year. I wonder, though, if it or Kurt Busch’s Kentucky win leaves them satisfied to hang it up, or hungry for more. A racer always has the drive to perform well. Still, I feel Johnson might be the first to make the announcement. This will be a very interesting silly season.

Vito Pugliese: Busch has been the one most speculated, rumored to be sticking with Chip Ganassi Racing to make a run in the GT program having gone to LeMans last month, and possibly a return to the Indy 500 next year. At the beginning of the season, Busch noted that this was going to be his 20th year in NASCAR and that might be a good round number to wrap things up with. He’d be the odds-on favorite to move, particularly if they want to move Ross Chastain up into the Cup Series. I think Kevin Harvick and Johnson stick around another season or two. SHR is going to be a whirlwind of activity in the next couple of seasons with Cole Custer likely joining the ranks, and potentially Kyle Larson making the move to SHR.

Christian Koelle: With Monster possibly re-evaluating its involvement as a primary sponsor, I would say Busch will be first. Johnson just picked up Ally and it’s a multi-year deal so I don’t really see him retiring anytime soon and Harvick still has a good few years left in him. It’ll be like Matt Kenseth; sponsorship woes will force Busch to retire or lighten up his schedule.

Amy Henderson:  Busch has already hinted that this could be his last season. If not, I think both he and Johnson hang up their helmets after next year. I would be surprised to see Johnson hang around after that. Harvick I think will give it a couple more years.

Should drivers get a playoff waiver based on the fact that they were too young to run all of the races in a season?

Koelle: This is a very tough question being as the waiver has been used in many different ways in the past. A driver who was suspended technically got one this season and a few years ago, a driver was granted a waiver after missing a good chunk of the season and he went on to win the championship. I believe waivers for drivers like Tyler Ankrum are OK. It’s out of his control to be old enough when let’s say Daytona comes around and in some cases, it’s pure luck that a driver’s birthday is in January or early February. Frankly, if you race in Trucks and that is your home, I feel like you should be able to compete for a title if you earn that opportunity. Ankrum earned it by winning, end of story.

Henderson: No. Just no. The waivers have gone too far. Ankrum and the entire team knew the rules before the season started. What’s next? Waivers for guys who got suspended?  Oh, wait…

Tomlinson: Since NASCAR gives waivers for many things, it seems appropriate that it would give waivers to such drivers. Ankrum only missed the first three races and was well-deserving since he had three top 10s prior to his victory, including a third-place finish at Texas. He’s still young and very talented, so he should get to be in the playoffs.

Pugliese: No. The whole waiver thing seems to be a popularity contest or whatever the temperature of the room is for a particular outcome. If you’re that young to start the year off, guess what?! You get to come back again next year as a seasoned veteran.

After a first time winner in Trucks and two in Cup over the last three weeks, who is most likely to add their name as a first time Xfinity winner?

Pugliese: I’m going to go with Noah Gragson. The year started off a bit up and down, but ever since Charlotte, he’s basically hada top-five car every race. Once you start putting together that kind of consistency, the wins will start to accumulate. The only thing that’s really been missing is race contention and dominance. He has only lead a handful of laps this season, but with Christopher Bell, Custer and Tyler Reddick getting the majority of the wins, Gragson and the JR Motorsports No. 9 team is going to have to find a bit more speed to get that first win.

Koelle: There is a good chunk of drivers who could do it. Austin Cindric needs to finish races and he could be a contender to win his first race especially on the road courses. Ryan Sieg and Gray Gaulding are both drivers who could luck into a win on one of those tracks and earn their first victory just like Jeremy Clements did a few years ago. I am also looking at Brandon Jones, who has shown so much improvement from where he was a year ago or heck even in his entire career.

Tomlinson: Well, I was going to say that Justin Haley probably has a good chance to get a win at a road course until Kaulig announced AJ Allmendinger would race at Watkins Glen. Brandon Jones looked like a good candidate to win last week, though his engine let go while leading. He’s had good finishes at all types of tracks so far, though he also has run into trouble. Still, Jones is on the same team as Bell, Joe Gibbs, so I know he can win. He just needs some good luck.

In the past month, the Cup Series has visited three tracks in Chicagoland Speedway, Kentucky Speedway and New Hampshire Motor Speedway that are down to just one regular-season date each. Do you think all three will be on the 2021 schedule and which is most likely to be dropped?

Pugliese: New Hampshire seems like it might be the odd track out. Chicago has produced some great racing the last couple of years, and after last weekend, it’d be hard to imagine Kentucky not making a return, a surprise given the track’s early stumbles and less than compelling finishes early in its history with the Cup Series. Chicagoland and Kentucky both have lights while New Hampshire doesn’t. The new low horsepower/high downforce package seems to have improved the optics of intermediates this year. How things might translate in the future to a flat one-mile oval remains to be seen.

Tomlinson: I have to agree with my colleague, that New Hampshire feels like the odd one out. The current package helped Chicagoland and (especially) Kentucky to produce better racing, and both tracks have lights. The Cup Series has only run at Kentucky nine times, and I’d like to see a couple more years of how the package affects things there (as long as it’s at night).

Henderson: Either Chicagoland or Kentucky; take your pick. We need fewer cookie-cutter tracks. Loudon is unique and difficult to drive, so it needs to stay. Lose one that is neither.

Koelle: With things getting interesting in the scheduling department, these three tracks are kind of the oddballs. Chicago has had its fair share of great races but so have Kentucky and New Hampshire. The difference between Kentucky and New Hampshire to Chicago is the fact that they are SMI tracks, two of the oddballs in over at SMI also. I don’t see any of these three losing their date but need to be moved. New Hampshire and Chicago were great playoff tracks, and I understand the changeup ordeal but honestly give those two playoff dates only and it hypes them up more. Kentucky is one that ever since I went last year, needs to be moved from July. It’s way too darn hot in July and a movement could draw more people. I would rather see Kentucky earlier in the season than later. You have to move races to find the perfect mixture and I feel like those three need it more than taking them completely off the schedule.

I doubt any of those tracks will lose a race. More like that a track with two dates will lose one.

John
Reply to  Bill B

and one with a smaller legal staff