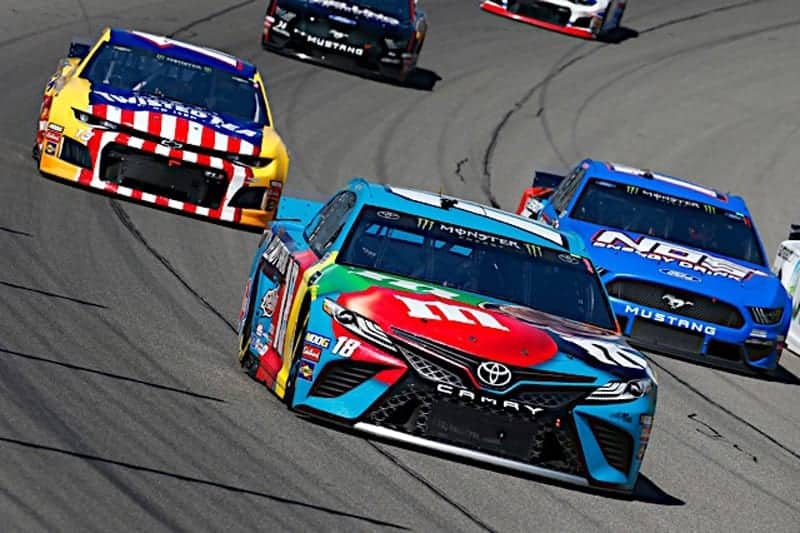 NASCAR returns to my home track in New Hampshire this weekend. The stands won’t be packed full, sold out with a waiting list, but I remember when they were. NASCAR was swelling, and maybe even then riding for a fall.

What happened in between is well-documented: the fad ended, and in an attempt to keep those bandwagon fans who jumped aboard then, NASCAR changed the game too much.  When the trend followers moved on to the next trend, something was going to happen without playoffs and schedule changes, the longtime fans were left with a sport they barely recognized.

But what if none of that had happened?

There’s always speculation about what might have happened had things been different.

Without the playoffs, would Jeff Gordon have more titles?  Would Jimmie Johnson have fewer? What would have changed if not for that fateful moment in Daytona 2001, or two of them at Loudon the year before?

Other than saying that Dale Earnhardt would be long since retired and Adam Petty would be looking at 40 next year, it will, of course, forever remain speculation. But there is one truth here: had nothing changed, everything would be different—a paradox perhaps, but truth nonetheless.

The question that should be asked is where does NASCAR go moving forward. Nobody gets another shot at a title already claimed; the drivers we’ve lost are part of the ages now. But the sport, and the times march on.

So, where do we go from here?

To fans, at least to some of them, the answers are, perhaps, simple.  Undo the wrongs that were done and everything will be fine.

Oh, some things could be undone. For one, the playoff system could be scrapped and it’s likely the sport would not lose fans.  It might win some back.

But even that move would not be without repercussions.  Titles won since 2004 run the risk of being delegitimized even further. And the television partners like the system, and TV brings money NASCAR needs.

Would taking the cars back to pre-1996, when they had to match each model’s street templates, solve the racing issues? Unlikely. Again, it might bring back some fans, or bring in new ones who were curious to see how the models fared. But it probably wouldn’t make much difference on track.  Today’s street cars are as different from 1995 models as the race versions are.

It would be interesting to see NASCAR experiment with a short series with cars that match vintage body specs from a particular era when fans think the racing was at its best, but with modern safety standards. Not vintage drivers, just the cars; I suspect finding drivers would not be a problem. Perhaps a short season of 15 races or so, with stops at a variety of tracks would draw fans on Saturdays, maybe in conjunction with the Xfinity or Truck Series. Make it a full-season title.

There could be merit in such a series. Would it bring fans to the track who might otherwise stay home? There’s a good chance it might.

The big question is where these as-of-now fictional cars would race.  It’s tempting to go all in and make it a short-track series, and there’s a lot to be said for that.  It would attract different drivers to the mix, perhaps some familiar names like Greg Biffle mixed with new ones.

On the other hand, keeping the races as companion races would allow current drivers to race. Their names are already familiar to fans (and drivers like Biffle and others in a similar vein could certainly compete as well) and they would bring a following along. And because it would feature different cars entirely, drivers from Cup as well as Trucks and NXS could compete on equal ground for a title. The completely different handling has the potential to bring different drivers to the top, as well as show how versatile some of the best in today’s cars really are.

Companion races, spread carefully to certain tracks, could avoid repeat visits to anything but the short tracks and maybe the one-milers, while including iconic tracks like Darlington, Charlotte and possibly even Daytona.  Road courses? Yes please.

How about races at Martinsville (2), Bristol (2), Richmond, Dover, Darlington, Charlotte, Watkins Glen, Sonoma, Phoenix, Loudon, Daytona, Atlanta and, on an off-week, Iowa?  That’s a sampling of great tracks.  To keep cost down, it would be easy to swap out Sonoma and Phoenix with Eastern venues like Pocono and Kentucky.

It would be interesting to see how today’s top drivers would fare in cars with a vastly different handle. While I suspect that some like Jimmie Johnson, Kyle Larson and Kurt and Kyle Busch would quickly adapt and be successful, other top drivers might struggle…and lesser-known ones shine. Add in some drivers currently not in a national series and that only adds to the intrigue.

Wishful thinking? Yes, absolutely. NASCAR’s not about to expand to another full national series, even with a short season.  But such a series would be fun to watch.

But would it be fun? It sure would.  And racing should, above all, be fun. Maybe, just maybe, here’s an instance where taking a step backward could move the sport forward in a positive way.

“What happened in between is well-documented: the fad ended, and in an attempt to keep those bandwagon fans who jumped aboard then, NASCAR changed the game too much.”

You and I have very different memories of NASCAR’s downfall.
My memory is that the “fad” was going strong and showed no signs of ending and then NASCAR got greedy and wanted to “grow the sport” to be bigger than the NFL. Then the reigns got handed over to a child that started effing with everything like a child with a chemistry set who knows nothing about chemistry. The chase and the COT, changing tracks for bigger markets and abandoning older ones, gravitating toward 1.5 mile and larger tracks because they can seat more people and host more types of cars. Greed, greed, greed.

As for getting rid of the chase and worrying about “Titles won since 2004 run the risk of being delegitimized even further” that ship has sailed. How many different iterations of the chase were there between 2003 and today? My memory is that we never had the same format for more than 3 years before they tweaked/changed something. So who cares about that? THERE IS NOTHING LEFT TO LOSE if we change it back.

Mack
Reply to  Bill B

Amen Bill B! Couldn’t have said that any better.

Bill B is right on target. It was purely greed at the hands of an entitled playboy that had no clue.

I love this article. Great points. As an old school fan since the Petty/Yarborough/Allison glory days, I wish those days would come back ( I know wishful thinking) .

I am hoping that NASCAR sees the light and and abandons the chase and stage racing. Can’t stand stage racing and to me it’s convoluted trying to figure out the points and playoff points awarded . I have never been a fan of the chase especially when someone who missed at least half a season ends up winning a championship.

The one thing NASCAR did correct was putting back the Southern 500 to where it should be on Labor Day weekend in Darlington. That was a huge kick in the stomach when they took it away and moved one of their marquee races to another track in California of all places. I give NASCAR credit for righting that wrong. Look at the atmosphere now in Darlington. The only race that reminds me of NASCAR’s old days.

Everyone is going to have opinions on what NASCAR should do but it seems that NASCAR will ultimately do what it wants to do. It does seem a little bittersweet seeing these races on TV with half filled seats and rock bottom ratings. I think all fans of NASCAR would love for them to go back to what made them successful in the first place.

I’d bet if some long time fans would go back and watch some of the older races (many are on youtube- off of somebodies VHS recordning, lol) the “great racing of yesteryear” isn’t always as great as memory seems to say it was.

Beyond that: another stock car racing series to fund with sponsors already lacking in the big 3? Not sure how that is going to work…

When I read this the first time through, I got ticked. But on second thought you’re right, Ed. It’s clearly better than it’s ever been. With a greater variety of tracks, manufacturers, engine builders, team owners, crossover drivers, creative freedom and big-time sponsors than any time in the sport’s history…oh wait…

Personally, I think the last nail in the coffin was the 5 in a row championships that Nascar manufactured for Johnson. The wink wink nudge nudge Nascar blind eye that went on in that era was disgusting. Do you really believe that all of a sudden no team except Johnson’s knew how to win? People walked away in droves and they never came back. Too bad, because the racing has been better this year than for a long long time.

Nostalgia drag racing has been healthy and popular since the late ’80s. They run old slingshot dragsters, AA/Fuel Altereds, early funny cars, Anglias, Willys, etc. The competitors, by and large, don’t race for money, but for fun and bragging rights. In the early days of nostalgia drag racing, they ran reproduction bias-ply tires to make the racing more like it used to be – and the results were thrilling for competitors and spectators.

A nostalgia NASCAR series could be a great thing – although it would probably be even better if NASCAR weren’t involved in it directly – just like NHRA and IHRA were not involved in the nostalgia meets, especially in the early years. To make it work, the tires would also have to be similar to the tires run in that era. Personally, I’d love to see a late ’60-late ’70s class and a ’80s class.

However, if NASCAR is directly involved, it will almost certainly fail. It needs to be organized and sanctioned by true enthusiasts of vintage racing. If NASCAR won’t allow an independent race to accompany their big show, then run ’em somewhere else – but in the same market as the cup race so fans can watch the Xfinity cars on Saturday afternoon and then go catch a vintage race under the lights at a local short track on Saturday night.

Bill B – I think you pretty well nailed that one!