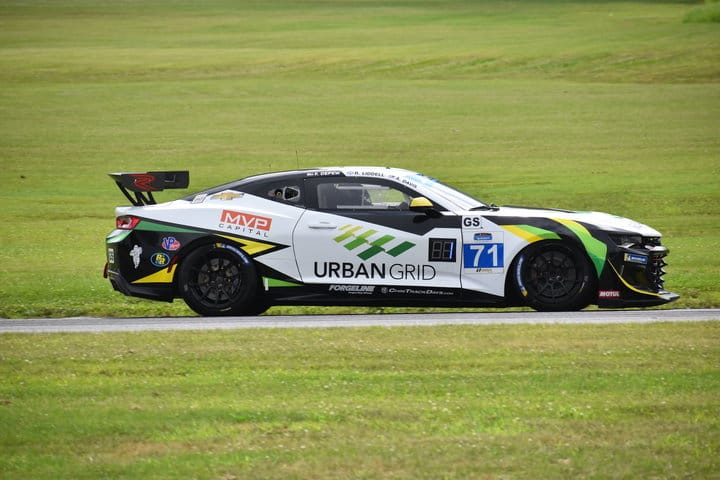 Andrew Davis got the late call to come to Lime Rock and drive Rebel Rock Racing’s Chevrolet Camaro GT4.R this weekend.  On Friday , he showed that the team made a good decision by turning in the fastest lap of the day at 99.161 mph in the opening session.

At 10 a.m. Friday, conditions were good for speed and that allowed the fastest times of the day.  Davis was able to turn in his quick lap in the opening part of the session, before the track got too warm.

Davis’ lap was a full four-tenths of a second faster than TeamTGM’s Owen Trinkler in his Mercedes.  Murillo Racing’s Eric Foss was third in his Mercedes, followed by the Ford Mustang GT4 of PF Racing’s Jade Buford.   Park Place Motorsports’ Trent Hindman was fifth in his Porsche.

CarBahn Motorsports’ Jeff Westphal was sixth in his Audi, then Motorsports In Action’s Jesse Lazare in the fastest McLaren.  Turner Motorsport’s Robby Foley was eighth in the BMW, then eEuroparts.com ROWE Racing’s Kenton Koch.  Guy Cosmo, who had a heck of a time even getting to Lime Rock this weekend due to flight delays, was 10th.

TCR saw the Hyundai Veloster N TCRs show their might.  Bryan Herta Autosport’s Michael Lewis topped the class with a lap at 97.125 mph, good for 16th overall.  That lap was one-seventh of a second faster than teammate Mason Filippi.  HART’s Ryan Eversley was third in his Honda, followed by the Audi of Roadshagger Racing’s Jon Morley.  JDC-Miller MotorSports’ Stephen Simpson was fifth quickest.

The second session was held in the heat of the day, resulting in slower speeds.  BimmerWorld Racing’s Devin Jones was fastest in the 45-minute session with a lap at 97.784 mph, a full three-quarters of a second slower than Davis’ quick time from the morning.

Jones’ lap was three-hundredths of a second faster than Buford’s Mustang.  Turner Motorsport’s Bill Auberlen was third in the BMW, then KohR Motorsports’ Kyle Marcelli and TeamTGM’s Hugh Plumb.

Westphal was once again sixth quickest, followed by Greg Liefooghe in Automatic Racing’s No. 09 Aston Martin, which is a current-generation Vantage as opposed to the previous generation car listed on the entry list.  Andrew Wojeczko Autosport’s Scott Hargrove was eighth in his Porsche, while Winward Racing/HTP Motorsport’s Christian Hohenadel and Hindman rounded out the top 10.

While Winward Racing/HTP Motorsport’s No. 57 was showing decent speed in the second practice, the No. 33 spent almost the whole session in the paddock.  Five minutes into the session, Russell Ward crashed his Mobil 1-sponsored Mercedes after cresting the steep hill on the back side of the course.  The Mercedes was extensively damaged and the session was red-flagged for 15 minutes.  As of this writing, the No. 33 Mercedes is in the paddock being worked on by the Winward Racing/HTP Motorsport crew.

Repairs are underway on the @WinwardRacing Mercedes after a crash in Michelin Pilot Challenge Practice 2 here at @limerockpark. pic.twitter.com/6t8zYMKZuC

The hotter weather brought the TCR teams a bit closer to the Grand Sport cars in the second session.  Atlanta Speedwerks’ Todd Lamb was fastest in class with a lap at 96.440 mph, good for 12th overall and only three-quarters of a second off of Jones’ quick time.

Lamb’s lap was half a tenth of a second faster than LA Honda World Racing’s Tom O’Gorman in the No. 37 Honda Civic Type-R TCR.  The No. 37 team failed to get on-track during the opening session, so getting decent track time was key for the team.

Filippi was third quickest in the best of the Hyundais, then his teammate Mark Wilkins.  Fast MD Racing’s Nick Galante was fifth quickest.

Teams are scheduled to have a brief warm-up session at 3:40 p.m. this afternoon before immediately getting into qualifying just after 4 p.m.  We’ll have a recap of qualifying later here at Frontstretch.