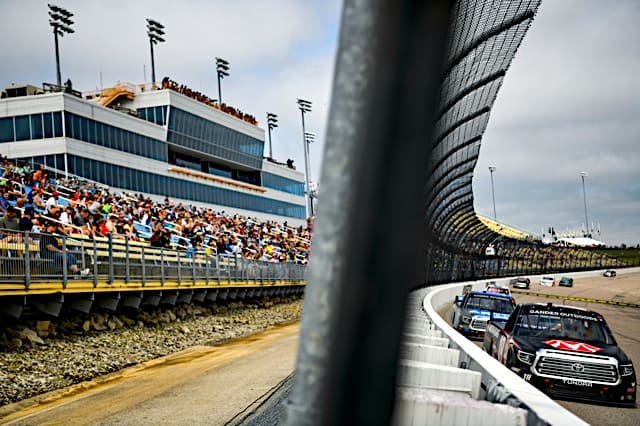 The ARCA Menards Series heads to the cornfields of Iowa this weekend for the 13th time for the Fans With Benefits 150. The track within the cornfields will have one of the best points battles in recent memory and will be on center stage alongside the NTT IndyCar Series. In 12 races, there have been 12 different winners and none of the points contenders have earned a victory in Iowa.

Two times out of the last three races at Iowa, the eventual champion has gone to victory lane. Sheldon Creed earned the victory last season en route to the ARCA Menards Championship, and during his championship-winning season, Chase Briscoe went to victory lane. Since the inaugural race in 2006, the eventual champion has won four times (Frank Kimmel – 2007, Ty Dillon – 2011, Briscoe – 2016, and Creed – 2018), meaning it could be a crucial part to a championship win should any of the four contenders earn the victory.

Michael Self continues to lead the point standings by 65 markers over Bret Holmes. Travis Braden sits third 100 points back and Christian Eckes, who is the final contender, sits 115 behind Self. All four drivers will battle it out on Friday night with at least one leaving with momentum as the series barrels toward the conclusion of the season.

One organization that has absolutely dominated at Iowa is Cunningham/Chad Bryant Racing. Under the Cunningham Motorsports banner, the organization has earned five victories with the most recent coming in 2017 with Dalton Sargeant. Cunningham also earned victories in 2016, 2012, 2010 and 2009 and on Friday night Corey Heim and Joe Graf Jr. will look to make it six victories. Graf currently sits fifth in points, 225 points outside the lead.

Kaden Honeycutt returns to the series for the first time since his seventh-place finish at Nashville. The No. 38 returns to the track for the third time this season, a career-high in races for his team. In four starts, Honeycutt earned his career-best finish in his last race at Nashville. Friday will be his Iowa Speedway debut.

After making two starts in 2017 with Mason Mitchell Motorsports, Colby Howard will return to the series with WinTron Racing. In two starts, Howard has two top-10 finishes with his best being an eighth-place result in his debut at Salem. Howie DiSavino Jr. brought the No. 32 Chevrolet home in 10th last weekend at Elko. Along with Holmes, Howard will look to earn Chevrolet their first victory since 2015.

The Fans With Benefits 150 at Iowa Speedway will be shown live on MAVTV at 9 p.m. ET.

It’s a bummer these races are on a network that I don’t have. Not sure what MAVTV is but it would be nice to see the ARCA races.