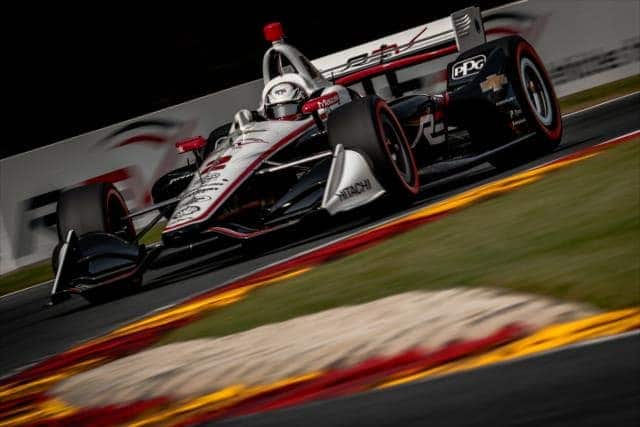 The NTT IndyCar Series returns to Iowa Speedway Saturday (July 20) for what is always one of the toughest races of the year. Known for its lightning fast corners and soul-crushing G-Forces, this .875-mile bullring pushes some of the best drivers in the world to their absolute limit. Combine that with 100-plus degree temperatures that have been baking the Midwest all week and you get, perhaps, the toughest physical test the IndyCar Series field will face all year.

While diminutive in size compared to the massive 2.5-mile Indianapolis Motor Speedway or the monstrous 24-degree banking of Texas Motor Speedway, Iowa manages to punch well above its weight. Its unique set of challenges often separate the contenders from the pretenders as the night wears on.

In 2016, Josef Newgarden put together one of the grittiest performances in recent memory at the track. In his last year with Ed Carpenter Racing, his success elevated him to a spot amongst the series’ elite drivers. The future champ dominated the race, leading a series-record 282 laps on his way to victory lane. It was an incredible drive considering Newgarden was a week removed from breaking both his clavicle and right hand in a terrifying wreck at Texas.

Newgarden’s victory that weekend was so impressive, it’s rumored, that it could very well have been the deciding factor in Roger Penske’s decision to go after the young American’s services.

This weekend, back under the Saturday night lights for the first time since 2015, we’ll once again get a taste of who the toughest drivers in the paddock really are in what could prove to be a pivotal weekend for several of them.

Newgarden has been comfortably in charge of the point standings for all but one race weekend this season. However, he has since seen his lead dwindle to just four points thanks to Alexander Rossi’s dominant win at Road America in June. Rossi followed that up with a podium finish last weekend in Toronto to come within striking distance of Newgarden.

If he wants to regain a little breathing room, Iowa’s the place to be for the 2017 series champ. The pilot of the No. 2 Team Penske Chevrolet has led a stunning 623 laps in only seven starts at the speedway. All of those have come in just the last four years, including 229 in the 2018 edition of the race.

While he let the win slip away with a mistimed strategy call, Newgarden was the car – and driver – to beat in last year’s visit to Newton. He would likely be gunning for his third win in four years this Saturday night had the race played out differently. Instead, he’ll be looking to regain his rightful place in victory lane and retighten his grip on a championship that has looked like, for most of the season, his to lose.

Virtually untouchable in the first few rounds of the year, Newgarden now has Rossi and teammate Simon Pagenaud nipping at his heels, setting up a three-man dash for the title. But while they’ve had several solid showings, the other two contenders have never performed to Newgarden’s level at Iowa. If they want to keep the pressure on in the championship chase, now would be the time to pull some magic out of their hat.

It was the @Team_Penske show in Practice 1 ?

It should come as no surprise that Newgarden and the Team Penske trio were at the top of the charts on Friday morning, the first of two practices for the weekend. The 2016 race winner led the opening session, just over a mile per hour ahead of Pagenaud, last week’s winner in Toronto, and Will Power.

Rossi, trying to keep up with the Penske crew, ended the session in P4. Scott Dixon, who still has an outside shot at successfully defending his title, put the No. 9 Honda fifth on the charts.

Since the race was changed back to a Saturday evening start time, the series opted for a truncated schedule. That means qualifying immediately followed first practice on Friday afternoon.

That's 5 straight poles for @Team_Penske at @iowaspeedway. They know how to run this place ?#Iowa300 // #INDYCAR pic.twitter.com/LVaMPwabcm

In the heat of the day, Pagenaud picked up right where he left off in Toronto, notching his second straight NTT P1 Award – and third of the year – with a two-lap average speed of 180.073 mph. Power, much in need of a solid showing this weekend, also managed to leapfrog his teammate, putting the No. 12 Verizon Chevy on the outside of the front row. Newgarden, after leading the morning session, will line up nose to tail with Pagenaud after qualifying third.

Takuma Sato, who continues to enjoy one of his most consistent years to date, will join the American in row two. Rossi, just four points out of the championship lead, won’t be far behind after putting his Andretti Autosport machine on the outside of row three.

Dixon, who has surprisingly never won at Iowa, will start directly behind Rossi on the grid after qualifying in eighth position. Behind him will be Formula One veteran Marcus Ericsson, starting an impressive 10th in his first short track oval start. His Arrow Schmidt Peterson Motorsports teammate, James Hinchcliffe­ – also the defending race winner – topped off a solid day for Arrow SPM by qualifying fifth. That will see him lining up alongside Rossi in the third row.

During the final practice session on Friday, in conditions closer to what we’ll see tomorrow evening, it was again Pagenaud and Newgarden at the top of the charts. But that practice didn’t come to a close without a few surprises.

Conor Daly, making his third start of the year and second with Carlin Racing, put the No. 59 Chevy inside the top five. Meanwhile, Ed Carpenter drove his ECR machine to third on the charts. Rossi, who has a best finish of sixth at the speedway, ended the session all the way back in 10th.

Every time the series comes to Iowa, Newgarden always has a chance to win. The man just has a knack for the place, consistently finding himself at or near the front of the field. With his lead in the championship dwindling, Iowa’s his best chance to reestablish his dominance in the title race. It would shock no one to see the series head to Mid-Ohio next weekend with Newgarden already boasting four wins on the year.

But if anyone can stop him right now, it’s Pagenaud. While we spent the first few races of the year wondering if he’d be back in a Penske Chevy next season, the Frenchman has since transformed back into the racer that dominated the 2016 season. Arguably one of the hottest shoes in the series right now, Pagenaud looked unbeatable last week in Toronto and convincingly swept the month of May in Indianapolis. With another win this week, he could be well on his way to a remarkable career turnaround and a second championship crown with the captain.

However, the story is much different for the third Penske driver. Power, while fifth in the season-long standings, has not looked like himself lately. The Aussie has just three podiums on the year and has yet to find victory lane. Once a near constant threat for the pole, Power hasn’t claimed a NTT P1 Award since the series visited Circuit of the Americas in March earlier this year. Cap that off with an ugly weekend in Canada that ended with his Dallara stuffed into the tires, Power’s in desperate need of a win just to get his season back on track. A distant fifth in the points race, he’ll need nothing short of a miracle to be in contention when the series makes its final stop at WeatherTech Raceway Laguna Seca in September.

But Rossi might be the driver most in need of a win in Iowa. With Newgarden one of the favorites this weekend, a victory could very well be the only way Rossi comes out of the weekend making headway in the points race. While not absolutely necessary, it would put the 2016 Indianapolis 500 champ atop the standings for the first time this year.

Saturday’s pre-race coverage begins at 7:00 p.m. ET on NBCSN with the green flag expected to drop around 7:10 p.m. ET. Live streaming is available on the NBC Sports App with a cable subscription.