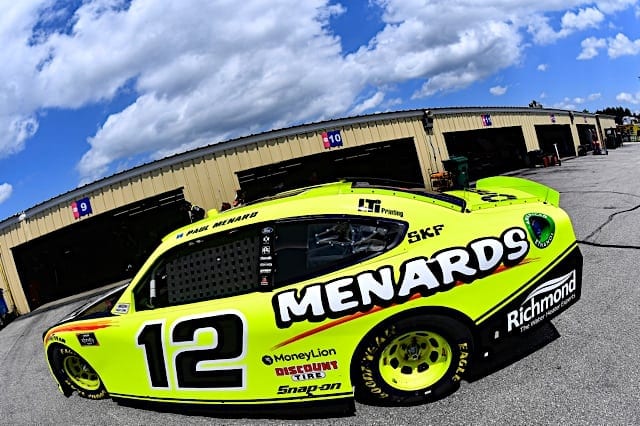 For most drivers, a top-five NASCAR Xfinity Series finish would be nice after a hot and exhausting day at New Hampshire. But for Paul Menard, the lone Monster Energy NASCAR Cup Series full-timer competing in the ROXOR 200, that was the last thing on his mind Saturday (July 20).

Instead, it was contact with Harrison Burton. The duo got together during the race with Menard spinning Burton into turn 1, essentially ending his day with 47 laps to go.

Paul Menard gets into @HBurtonRacing.

Menard on the radio: "He hit me twice." pic.twitter.com/LtHCWmfWr5

“He was mad that I ran into him in turn 1 and I was mad at him that he ran into me twice before that,” Menard said after the race. “It is what it is.”

Menard, who still recovered for a solid day, had some discussion after the race with Burton on pit road.

“I voiced my displeasure. He’s a young kid,” Menard said. “I don’t know how old he is — 17, 18, he has got a long time in this sport. He has got to figure out this stuff pretty early as he races more in Xfinity and especially if he makes it in the Cup level, because they don’t put up with it.

“Some of these kids are really fun to race with and some of them just don’t get it, so I think you have to cut that sh*t out at an early age. I race with [Chase] Briscoe,  [Noah] Gragson, some of these kids have a lot of talent where they don’t need to hit someone to wreck them. I have never met the kid, Harrison. I know his dad [Jeff Burton] really well and got a lot of respect for him, but the kid ran into me and that was enough of that.”

Burton had a different view of it, though.

“He was holding us up early in the race and I was racing him clean for a long time in the race, and honestly, the whole race,”  Burton told NBCSN.  “We got a restart there and the first thing he said he was mad about was the restart, but I was on the apron and he turned down across me on my nose and then got mad at me about that. And then I touched his nose because I didn’t want to hit him any harder than I did, and then I let [Michael] Annett go and then he wrecked me.”

Burton went on to finish 29th, a disappointing end to what would have likely been his third top-10 finish in three career NXS starts. He’ll move back to his NASCAR Gander Outdoors Truck Series ride with Kyle Busch Motorsports at Pocono next weekend.

Next up for the Xfinity Series is the U.S. Cellular 250 at Iowa Speedway on July 27.

A no talent hack born with a silver spoon up his a$$ competes in a lower level series and gets mad at a young racer. Got it.

What the hell has menard ever done to deserve a cup ride. Oh that’s right. Daddy foots the bill.

Mike – I was watching it too. Totally classless move by a no talent. If I was Harrison I would have leveled him afterwards. There will be payback — somewhere. Wish Ryan was still in the #21 car….

Another one with Daddy’s Money and nothing to show for it.