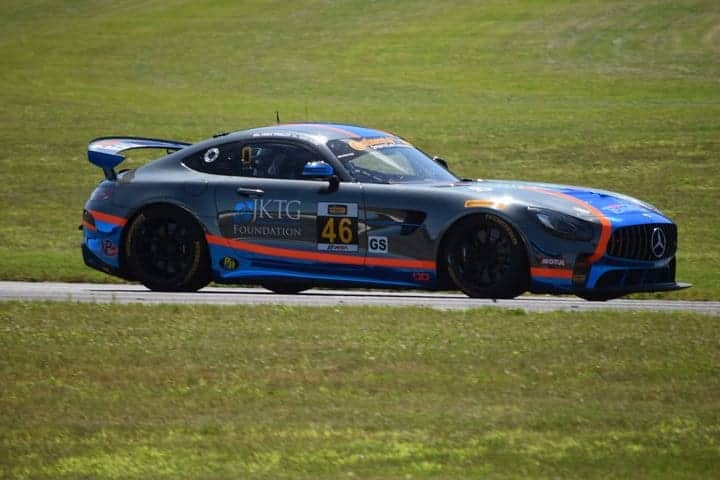 TeamTGM’s Owen Trinkler and Hugh Plumb started from the pole in Saturday’s Lime Rock Park 120.  From there, they led the vast majority of the race, but had to sweat out their fuel in order to repeat as winners at Lime Rock Park.

“[Today’s win] is all about the TGM guys,” Plumb said after the race.  “I do a very small part of this.  Owen Trinkler, who is the best in the business, gave me a great car.  Today really went our way.  So proud of Mercedes, Ted Giovanis and everything that he provides for us.”

From the pole position, Trinkler was able to hold off CarBahn Motorsports’ Tyler McQuarrie early on.  Eventually, he was able to pull out to a three-second lead prior to the start of pit stops.  Here, many of the leaders chose to pit early.  Trinkler and TeamTGM decided to stay out much longer.  By the time Trinkler finally pitted, 57 minutes of the race had elapsed.

The problem with that strategy is that there was a significant amount of tire wear in those first 57 minutes.  In that time, Trinkler’s lap times slowed by roughly 3.5 seconds a lap.  As a result, when Plumb got into the car, he dropped from the lead on a lap of his own to third behind CarBahn Motorsports’ Jeff Westphal and Rebel Rock Racing’s Robin Liddell.

Despite being back to third, Plumb had the advantage of fresher tires.  He was able to get back to second when Liddell stopped to make his final stop.  Then the game changed when the race’s sole full course caution flew with 35 minutes to go due to debris.  Westphal pitted to take fuel, which gave the lead back to Plumb.

Plumb chose to stay out and try to make the distance on just one stop.  This move trapped a number of teams down a lap.  Only the top three were on the lead lap when the race resumed, although BimmerWorld Racing’s Devin Jones and Liddell quickly got themselves past Plumb to unlap themselves.

Once the race restarted, Westphal attested that he simply didn’t have the pace to keep up with Plumb on merit.  However, he was good on fuel while things for Plumb were far closer.  In the closing laps, a combination of low fuel and traffic forced Plumb to conserve.  That allowed Westphal to move back in on Plumb in the closing laps, but Plumb was able to hold on for the win.

The margin of victory was just three-eighths of a second over McQuarrie and Westphal.  Murillo Racing’s Eric Foss and Jeff Mosing had to recover from being two laps down at one point to finish right behind the CarBahn Audi to finish third in their Mercedes.  Jones and James Clay were fourth, 39 seconds back, while Liddell and Andrew Davis were fifth.

The vast majority of the TCR race at Lime Rock was dominated by Hyundai, but not completely at first.  Bryan Herta Autosport’s Michael Lewis qualified on pole, but KMW Motorsports with TMR Engineering’s Alexandre Papadopulos was able to get past to take the lead on the first lap.  The Alfa Romeo has shown flashes of form to this point and Saturday was one of them.

Papadopulos’ led was relatively short-lived, though.  23 minutes in, Papadopulos collided with the Andrew Wojteczko Autosport (AWA) Porsche of Orey Fidani in Big Bend.  Fidani spun out while Papadopulos was sent out wide into the grass.  The off-course excursion put Papadopulos back to fourth in class while Lewis re-took the lead.

Once back out front, Lewis was able to expand his advantage over teammate Harry Gottsacker.  In addition, Lewis stayed out all the way to the halfway point before stopping for the team’s only stop of the race.  Unlike Trinkler, Lewis was a little easier on his tires.  That allowed the No. 98 team to pit their Hyundai Veloster N TCR, put in Mark Wilkins, replace all four tires and refill the tank, all while keeping the lead over Atlanta Speedwerks’ Todd Lamb.

The caution did shake things up in the class.  Wilkins made a second pit stop and that allowed Lamb to briefly take the class lead.  A couple of laps after the restart, Wilkins was able to get the lead back as Lamb faded on worn Michelin tires.

The race ultimately came down to a duel between Wilkins, JDC-Miller MotorSports’ Stephen Simpson and Mason Filippi in the second Hyundai.  Lamb dropped far enough back by the finish that he was not scored on the same lap as the three leaders.  Ultimately, Wilkins was able to hold on to take the victory.

Lewis and Wilkins’ margin of victory was 3.325 seconds over Simpson and Michael Johnson in their Audi.  Filippi and Gottsacker were third.  Lamb and Brian Henderson were scored a lap down in fourth, while HART’s Ryan Eversley and Chad Gilsinger recovered from a drive-through penalty to finish fifth.

Michelin Pilot Challenge teams will be back in action in two weeks for two hours of racing at Road America.  The Road America 120 is scheduled to go green at 4:05 p.m. on Saturday, Aug. 3.