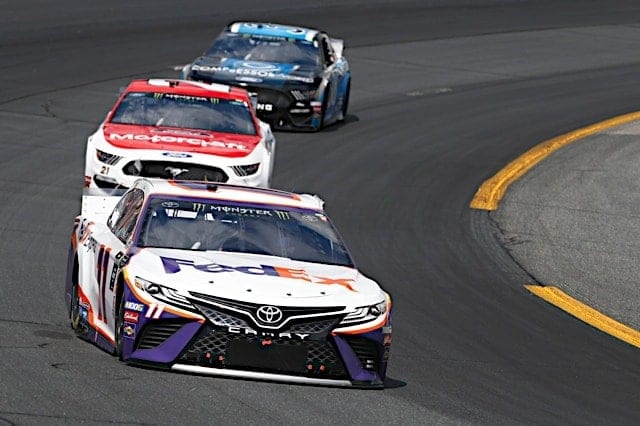 It was close but no cigar for Denny Hamlin in Sunday’s (July 21) Foxwoods Resort Casino 301 at New Hampshire Motor Speedway.

In one of the best finishes in NHMS history, Hamlin fell just short of besting Kevin Harvick for the win, as the two made contact in the final corner on the way to the checkered flag.

You have to see this! @KevinHarvick fights off @dennyhamlin to score the victory at @NHMS! pic.twitter.com/4gWJKl7tpN

“I stayed right with him the entire run,” he said. “I just couldn’t get past the aero. I was so tight behind him I couldn’t break that barrier. He made a lane choice coming to the white (flag) in Turn 3 and went low. And I knew then, I was like ‘I’m going to have a monster run coming off this corner.’ My first instinct was to just move him up one lane. I didn’t want to completely screw him and knock him in the crap like last year. I wanted to get position. I got position, that didn’t work, neither one of us wanted to lead.”

Well damn.. we really had a great car the 2nd half of the race. Was in a tough position on pit call while leading. Some guys were gonna do the opposite no matter what but we certainly gave ourselves a shot there at the end. Wish I had the last lap to do all over again.

“We’re going off turn 2, we’re both letting off the gas and both wanted to be in front of the other. I should’ve kept the bottom and forced him up like he forced me up in turn 4. If I could’ve done it all over again, I would’ve done that. But I tried to give myself a fair shot in 3 and 4 and run the top and really get a good run and position on him. I should’ve known he was going to cut that run off. I should’ve known he was going to do that and turn right on us. When you’re in the bottom, you have the power position to knock a guy up. It was my bad choice to go up high. Nonetheless it was a fun race and I’m glad we were able to put on a good show.”

Hamlin pointed to a couple moments on the final lap that he wish he had back. Specifically, if he had the lead in turn 3, he would have knocked Harvick up the track and wanted to be in a power position on the bottom in turns 3 and 4.

“Stupid me, I backed off once I got to the bottom,” he said. “I needed to be more decisive about the move I wanted to make there. We gave ourselves a shot to win, we were really fast at the end of the race. They made a good call to get that track position at the end, we just couldn’t get the aero at the end.”

Hamlin could’ve been more aggressive and/or dirty with his move on Harvick, but chose to go the cleaner route.

“Oh for sure,” he said of making contact. “We were side by side through the center of (turns) 1 and 2 I should’ve just drove straight, knocked him up the groove and then he would’ve been in the stuff and it would’ve been over with. That’s just not how I want to do it. We know how to race these things clean and let’s just figure it out at the end, he got the best of us.”

That sentiment mostly comes out of respect and admiration for the 2014 Cup Series champion. Just two veterans racing for the win.

“I got a lot of respect for Kevin. I did the best I could to be as clean as I could,” he said. “But also you’ve gotta make a move to get position, I did that and didn’t execute well. We definitely should’ve won, that’s what I really want. It just didn’t happen.”

The result was the two-time Daytona 500 winners second top five in a row, ninth this season and 10th top five at New Hampshire Motor Speedway.

Hamlin also needs to send flowers to Austin Dillion as the only reason Hamlin got that close in the first place was due to Dillion dickhead move not to get out of the way and be completely in the racing line even though he was like 30 laps down in like 33rd place.
If Dillion does what he should have being a respectable driver Hamlin may not have been close enough to have this scenario play out. He likely would have had to do a more divebomb of one of the corners a la Ryan Newman on I believe Larson at Phoenix(?) several years ago.

Not a big “All we do is win” fan of Hamlin, but he showed racing class at the end.