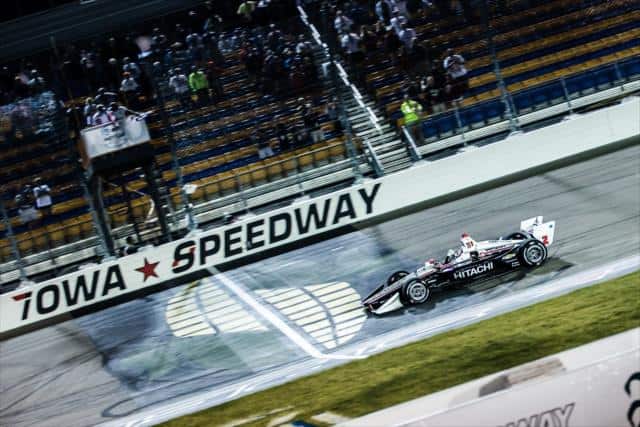 After a night that began with heavy rain, wind and fierce thunderstorms, the NTT IndyCar Series drivers were finally able to make their way on to Iowa Speedway for the 2019 Iowa 300. When all was said and done, Josef Newgarden stood victorious in a race that wasn’t completed until early Sunday morning (July 21).

Heavy rains postponed the start of the race for hours until well after 11:30 p.m. ET. But the soaking simply set the stage for Newgarden to thunder past the field in a dominating performance.

“This is great to be back here in victory lane,” Newgarden told NBC after the race following his second Iowa victory in four years. “Chevy brought it tonight, they had all the horsepower in the world, reliability and fuel mileage.

“This is a team effort, you saw all three [Team Penske] cars were fast tonight and that’s what it takes, you gotta have all three of us pushing each other. I was a little down yesterday, I felt like we had the pole car and we didn’t get it right.

Newgarden and his Penske team did hit the setup perfectly; he led all but 55 laps in the race. Only Will Power, who led many of the early circuits, cut into his total through on-track speed.

Just seven cars remained on the lead lap when the checkered flag waved. Scott Dixon, who struggled throughout the race, even going a lap down at one point, clawed back with a second-place finish for his Chip Ganassi Racing team. James Hinchcliffe came in third, followed by pole sitter Simon Pagenaud. Spencer Pigot had an excellent race with a fifth-place finish while Alexander Rossi and Zach Veach were the final two on the lead lap in sixth and seventh. Graham Rahal, Sebastien Bourdais and Tony Kanaan rounded out the top-10 finishers.

Pagenaud may have won the pole but it was Power who took the lead at the start. He sped away on the outside while Takuma Sato took second. The action didn’t last long, though as Sage Karam spun and hit the wall off turn 4. Felix Rosenqvist brushed his front wing against Karam while trying to avoid him. Fortunately, both drivers’ crews were able to repair their cars and they both continued racing.

Power led on the next restart while Newgarden took second from the pole sitter. Newgarden started showing his cards – and speed – passing Power for the lead just before a second batch of rain halted the race around lap 55. Thankfully, it lasted only about 20 minutes, and cars made their pit stops under yellow after another red flag halted proceedings.

Following the restart, Newgarden held the lead while drivers battled wheel-to-wheel for position behind. At one point, Santino Ferrucci and Rossi went three-wide under Sato for fourth and fifth.

But the No. 2 Team Penske car of Newgarden was in a class all his own. He lapped nearly the entire field during that green-flag run, until about lap 200 when the caution waved again for an incident. Sato slowed up a bit near the wall and Karam couldn’t avoid him from behind. Sato was sent spinning and both cars had to retire due to the crash.

After this incident, @SageKaram was issued a drive-through penalty. He has now retired from the race. #Iowa300 // #INDYCAR pic.twitter.com/fCfXhEjCCQ

With 100 laps left on the night, Newgarden kept his lead, only giving it up to make his final green-flag stop. During that set of stops, Power had to serve a stop-and-go penalty due to his entry onto pit road. This mistake was costly and he lost any chance he had to battle Newgarden up front, especially once Ed Carpenter on lap 264 spun and hit the wall.

Disappointing end to a good run by @edcarpenter20. Yellow flag is out again. #INDYCAR // #Iowa300 pic.twitter.com/tDz74nmNmS

When the green came back out with just 26 laps to go, Newgarden faced little resistance. He was well on his way to his fourth IndyCar win of the season, increasing his lead in the standings to 29 over Rossi.

Another win and continuing to lead points. @josefnewgarden and the No. 2 @hitachiauto / @Hitachi_US Chevy team continues to be on fire. ? #INDYCAR | #Iowa300 pic.twitter.com/c0hLCWkoA1

The next race on the docket for the NTT IndyCar Series is the Honda Indy 200 at Mid-Ohio. Coverage begins next Sunday, July 28 at 4:05 p.m. ET on NBC.