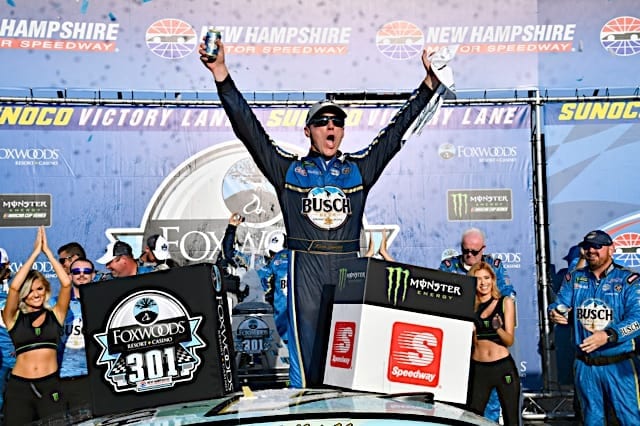 Harvick’s 21-race winless streak in Cup ended Sunday (July 21) after a late call by crew chief Rodney Childers to keep him on the racetrack with old tires. He wound up charging in front on the final restart and holding off Denny Hamlin in a frantic last-lap battle between the two. Bumping and grinding off turn 4, the 2019 Foxwoods Resort Casino 301 was settled with both drivers jockeying for position to the start/finish line.

Harvick – just barely – held Hamlin off, jumpstarting a bizarre year with Stewart-Haas Racing in which it took 20 races to win his first of 2019. The perennial title contender had a career-high eight Cup Series wins last season.

This is what @NASCAR's all about!

WHAT A FINISH! @KevinHarvick and Denny Hamlin beat and bang to the line at @NHMS, as Harvick gets the win! @NASCARonNBC pic.twitter.com/VU0FX7Vxqv

“Rodney (Childers, crew chief) and those guys made a great call,” Harvick said. “We had a good car all day we just never could get track positionn. I didn’t want to see that traffic there at the end. He got to me, tried to move me so I just stood on the brakes and said, ‘You’re not getting under me again.’

“We’ve run well enough a few times this year and just made mistakes. To battle and get over the hump is just a great day for Stewart-Haas Racing.”

The lapped car of Austin Dillon set up the last-lap battle when the No. 3 washed up into Harvick’s line. It allowed Hamlin to close the gap on fresher tires, setting up contact and bumping throughout the final lap.

“I kind of shoved [Harvick] up a little higher and tried to get him out of the groove,” Hamlin said. “I just wanted to tap him there, but I didn’t want to completely screw him. I at least wanted to give him a fair shot. Down the backstretch, I backed off and tried to do this thing the right way. I had a big run and he just turned right… but I would have done the same thing.

“It was a fun race. Really happy about our performance… sh*t. Second sucks.”

The race started with heavy hearts after NASCAR Xfinity Series crew chief Nick Harrison tragically passed away Saturday night. Kyle Busch dominated early, winning the first stage but ultimately fell back in traffic and caused a late caution after hitting the outside wall. He finished eighth after leading a race-high 118 laps.

As Busch faded, Hamlin made his way to the front after working his way through traffic with a backup car. Friday’s practice mishap turned into Sunday’s reward as his No. 11 FedEx Toyota was the class of the field during the final stage. But a late spin by Kyle Larson reset the field and forced Hamlin’s hand as the leader. He chose to come down pit road while Harvick stayed on track, making the difference as clean air was key with NASCAR’s high-horsepower package.

Martin Truex Jr. was sixth, a strong comeback after wrecking with Clint Bowyer midway through the race. Truex was frustrated over the contact which kept both drivers from making a bid for the win.

"It's just beat to sh*t. He just rubbed me right in the fuck*ng fence. Don't know where he thought he was going." @MartinTruex_Jr on @ClintBowyer

Ryan Newman, meanwhile fought for seventh on a day that had major playoff implications. Jimmie Johnson saw a top-10 run go sour after encountering power steering problems; he wound up 30th, 12 laps off the pace. Newman’s team successfully fixed a bad wire that was causing the No. 6 Ford to lose power, salvaging his day and putting him on the right side of the cutline.

Unofficially, Newman is in while Johnson is out by 17 points (Bowyer is now holding down the final playoff spot). Keep in mind Johnson, a seven-time Cup champion, has made every version of the NASCAR playoffs since they began in 2004.

“It’s certainly a letdown, to say the least,” Johnson said. “I assume some debris got in the system and took out my power steering and water pump. Just unlucky.”

Kyle Busch, Joey Logano and pole sitter Brad Keselowski rounded out the top-10 finishers from Joe Gibbs Racing and Team Penske, respectively. Harvick’s win continued a streak of top-tier dominance at NHMS: JGR, Penske or SHR has won every Cup race held there since the middle of the 2013 season.

It was a tough day for other postseason hopefuls on the fringe of the bubble. Ricky Stenhouse Jr. had a hard wreck, losing a tire after making contact with Erik Jones a few laps earlier.

“The No. 20 has gotten us a couple of times now,” Stenhouse said. “He’ll have one coming at some point.”

Austin Dillon also crashed for the fourth time in 10 races. Both drivers finished outside the top 30 and will almost certainly need a win to make the postseason going forward.

Pretty good finish. Glad to see Denny didn’t just take Harvick out like Hallie Deegan or Joey Logano does to get the win.