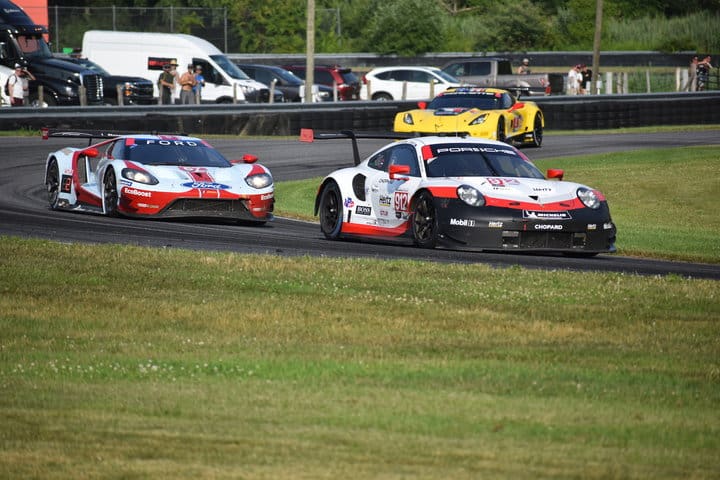 The Northeast Grand Prix on Saturday (July 20) came down to the final minutes.  Ford Chip Ganassi Racing IMSA’s Richard Westbrook was able to pass Porsche GT Team’s Earl Bamber for the lead with seven minutes to go (just seconds after the above picture was taken).  From there, Westbrook pulled away to take Ford’s first victory of 2019, breaking Porsche’s streak of five consecutive wins.  After the race, Westbrook gave significant credit to his teammate, Ryan Briscoe.

“Ryan made my day a lot easier,” Westbrook said after the race.  “He did an amazing stint.  He got the hard work out of the way early.  We knew we’d finish on better tires.  The car was just amazing.  It really was.  Sometimes it feels like we have the slowest car on the grid.  But we just did everything perfect today.  The three stop strategy worked just great.”

Up until the halfway point of the race, Porsche GT Team had dominated the weekend, topping three of the four practice sessions and sweeping the front row in qualifying.  Laurens Vanthoor started from the pole and led the pack early.  For the first half-hour, the top seven cars in GT Le Mans were all but nose-to-tail.  Only John Edwards in the No. 24 BMW Team RLL dropped off the back, plagued by an understeering BMW M8 GTE.

Vanthoor and teammate Nick Tandy eventually pulled away from the pack by seven seconds prior to the first pit stop of the day.  The No. 911 with Patrick Pilet at the wheel was able to overtake the No. 912 during the round of stops to take the overall.  Bamber did not take kindly to that as he quickly dispatched of Pilet to re-take the lead shortly afterwards.

While Porsche GT Team maintained a two-stop strategy during the race, Ford Chip Ganassi Racing IMSA went with a three-stop strategy.  There were multiple reasons for that move.  One was the high heat.  Temperatures reached the upper 90s during the race, which contributed to more tire wear than normal.  Another reason was that on equal tires, seemingly no one could hang with the Porsches.

Westbrook rejoined in fourth s behind Patrick Pilet in the No. 911 Porsche.  Shortly after the final stops ended, the two Porsches started battling for the overall lead.  With just over a half-hour remaining, Bamber was able to get past Pilet.  Pilet tried to stay with his teammate, but an off-course excursion in Big Bend took him right out of contention.

When Pilet slid off-course, Westbrook assumed second, four seconds out of the lead with a little more than 20 seconds remaining.  Using his fresher rubber, Westbrook was able to run down Bamber.  The two battled hard for multiple laps while also dealing with slower traffic before Westbrook made the move for the win.

Westbrook and Briscoe’s margin of victory was 7.003 seconds over Bamber and Vanthoor.  The No. 66 Ford of Joey Hand and Dirk Müller was third, followed by Pilet and Tandy.  Corvette Racing’s Jan Magnussen and Antonio Garcia were nearly a full lap behind in fifth.

In GT Daytona, Meyer Shank Racing with Curb-Agajanian’s Trent Hindman led from the pole and maintained that advantage all the way to the first pit stop.  At that point, Mario Farnbacher got in the AutoNastion Acura, but the team had a long pit stop.  That allowed Riley Motorsports’ Jeroen Bleekemolen to jump the Acura and take the lead.

Once out front, Bleekemolen pulled out a sizable lead on Farnbacher.  Then, he approached the second Meyer Shank Racing by Curb-Agajanian entry, the Caterpillar-sponsored No. 57 driven by Katherine Legge.  Both Bleekemolen and Ben Keating accused Legge after the race of running blocker for Farnbacher.

We did not win today because of the MSR Acura “team racing” of @katherinelegge. I wish it could have been a fair fight, but I don’t have 2 cars in the race. #unsportsmanlike.

After a great opening stint from Ben and a good pit stop I could open a gap of 12s in P1. Got behind a car trying to stay on the lead lap. Pace of that car dropped drastically and I was put on the grass 3x. P9 in the end after some issues later and being spun by a GTLM car. pic.twitter.com/a0n3JInG9X

The result of the blocking is that Farnbacher was able to jump Bleekemolen in the pits and re-take the class after the second round of stops.  PFAFF Motorsports’ Dennis Olsen moved into second as Bleekemolen dropped to third.  Bleekemolen was able to stay there until he ran into handling issues in the closing laps.  This spin in the final 10 minutes dropped the Wynn’s Mercedes to a ninth-place finish.

This spin in the closing minutes ultimately dropped @jbleekemolen to a ninth-place finish. It was the cherry on top of a frustrating race. pic.twitter.com/JO27EbR9XL

Different pit strategies and substantial tire wear resulted in Olsen running down Farnbacher in the closing laps.  With less than four minutes to go, Olsen was able to make the pass in traffic.

Despite the late pass, the race was not sewn up.  The PFAFF Porsche had a puncture in one of their tires.  That made the Castrol-sponsored Porsche with the flannel paint scheme dicey to handle at best.  Over the last couple of laps, Farnbacher was all over Olsen, but simply could not get past.  Exiting the Diving Turn on the final lap, Farnbacher went to Olsen’s outside and attempted to drag race him to the line.  Olsen just barely beat Farnbacher to the line by one-hundredth of a second to claim the victory.

The win is the first-ever IMSA WeatherTech SportsCar Championship class victory for PFAFF Motorsports, and the first-ever victories for rookie Zacharie Robichon and Olsen.  For Olsen, Lime Rock is a one-off for him in the car as Matt Campbell will be in the car for Road America.

Turner Motorsport’s Bill Auberlen got past Bleekemolen with 10 minutes to go, prior to Bleekemolen’s spin.  From there, he held on for the final step on the podium with teammate Robby Foley.  Park Place Motorsports’ Patrick Long and Marco Seefried were fourth, while Wright Motorsports’ Campbell and Anthony Imperato were fifth..

All four classes of the IMSA WeatherTech SportsCar Championship will be back in action on Aug. 4 at Road America for the Road Race Showcase.  Coverage will air live on NBCSports.com at 2:30 p.m. since the race is airing at the same time as the Monster Energy NASCAR Cup Series Go Bowling at the Glen.  The race will air via tape delay at 6 p.m. after the Cup race finishes.