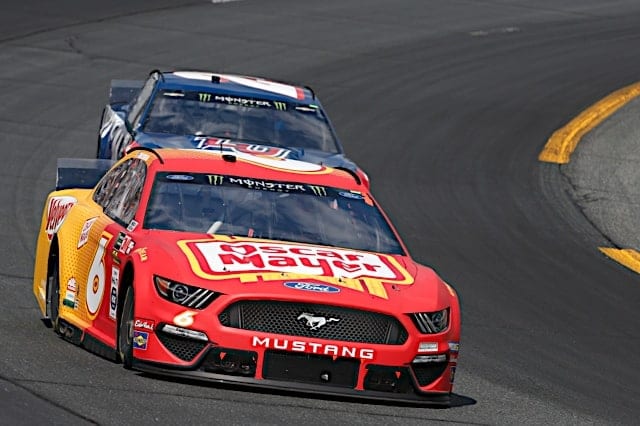 After starting in the rear Sunday (July 21) in a backup car, encountering an engine issue with under 100 laps to go and coming from the back to the front of the field multiple times, the Roush Fenway Racing driver wound up with a seventh-place finish. It’s his third straight top 10 of the season, enough to cross the threshold and put him on the right side of NASCAR’s playoff cutline.

“Honestly, that’s the most fun I’ve had all year in a racecar,” Newman said post-race. “And that’s mostly because we had a good, competitive Oscar Mayer Ford. I slid through the (pit) box, we had (engine issues), a bunch of things set us back. Being in a back-up car, starting last and had the finish that we did on a track that’s usually difficult to pass at – but I will say I did pass a few guys three-wide and that doesn’t happy very often here – proud of the team effort, something to build on, for sure.”

Newman’s performance in the Foxwoods Resort Casino 301 shouldn’t have come as a shock. The driver of the No. 6 Ford has had success at New Hampshire Motor Speedway before. He’s scored 17 top 10s, seven top fives and two wins in 33 career starts in The Granite State.

“I don’t know, something about me and The Magic Mile, I guess,” he said. “Today was kind of like a win. To fight back from all the things that we did, I feel very emotional about how well we did given the adversity in front of us.”

Running inside the top 10 for most of the 301-lap event, Newman fell back to 15th and was on and off pit road multiple times with the hood up as his team attempted to diagnose a faulty cylinder. At one point, it looked like the team was in position for an early exit despite putting themselves in position for a solid finish during the final stage.

“I didn’t know what it was,” he said of the issue. “They found they could physically fix it. I was thinking of ways to help it without fixing it. They did an awesome job assessing the situation. We caught a couple breaks with the cautions. We did all we could to stay on the lead lap and it worked. Awesome job. If we could have had one more decent run in there, we would’ve been up there racing with them for the lead. But that second-to-last run, we were just way too loose.”

With drivers pointing to track position as the key factor at NHMS, Newman was able to maneuver by competitors in ways he hadn’t previously at this flat, one-mile oval.

Unofficially, Newman now sits 15th in the standings, 21 points above the cutline. It’s the first time Roush Fenway Racing’s No. 6 car finds itself in playoff position this late in the regular season since the current format came into play in 2014.

“It’s not dire, we’re just out there doing the best that we can,” he said of his situation. “I don’t think of it as dire. I think of it as opportunity. We keep gaining, this is our first time at this racetrack. We’ve got a string of top 10s going here that we need to keep going. Looking forward to the next few races.”

Newman will look to gain more ground next weekend at Pocono Raceway with six races remaining until the playoffs begin.

It grinds my gears any time any driver steps out of his car and says ” That was fun!” To me it should be the hardest thing you had to train and prepare for all week. Maybe if you came out a little more exhausted and drained with a little less “fun” you might have a checkered flag in your hand? Just me.

While any driver can win, not every car is a winning car. As long as the season is, I’d hope drivers can have fun, even if they didn’t win, by overcoming odds and adversity and passing cars on the race track. Newman made a three wife pass in the last run and forced another driver to roll out of the throttle early. I’m sure that was a fun moment that would meet your criteria.

Fed Up
Reply to  Bobby DK

The definition of “fun” is very subjective. What Newman did yesterday was a product of his tenaciousness and quite an accomplishment in any driver’s eyes. Good racing isn’t always about taking the checkered flag.

Geez, I think people like us with regular jobs are supposed to never have fun. I’d hope that someone doing what most of us wish we could do, had some fun doing it at least once in a while.

I think you are mistaking the word “fun” with the word “easy”. He didn’t say he didn’t have a hard time and wasn’t working his ass off, he just said he had fun working his ass off because the car allowed him to make the moves he needed to. He had to come from the back a couple of times so to be able to race to the front probably is a driver’s definition of fun.