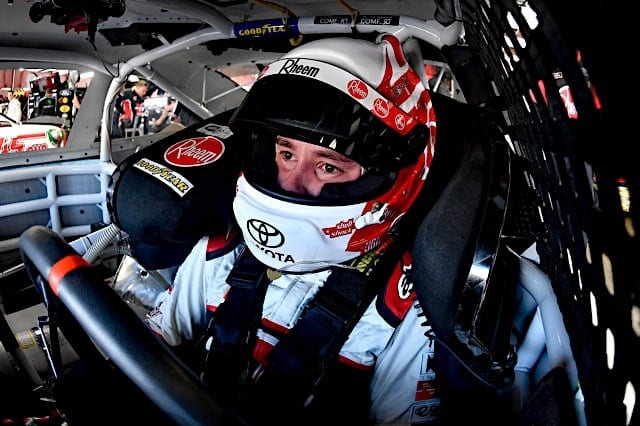 There was some tight racing and flaring tempers at times during the ROXOR 200 at New Hampshire Motor Speedway. Christopher Bell just wasn’t part of any of it.

Not for any bad reason from the perspective of the No. 20 Joe Gibbs Racing team. Bell just simply was the best car for most of the afternoon, and definitely all of the times when it mattered. The only thing that kept him from sweeping all the stages was some good pit strategy by teammate Brandon Jones in stage one — and even there, Jones had to win a drag race back to the start-finish line.

In other words, when Bell told NBC Sports after claiming the checkered flag that he was giving most of the credit to his crew for giving him a fast car, he wasn’t just being modest.

“I just had a really good race car,” Bell said. “I’m very thankful to be able to drive these Supras for Joe Gibbs Racing … They just provide really fast race cars, and I’m the lucky guy who gets to drive them.”

Okay, so Bell was downplaying his part in the operation just a tad. He still needed to ace his restarts, which he did at New Hampshire as usual. On the last few, the cars starting to his inside couldn’t even hang with him for a lap before he started to set sail, and there was no catching him in clean air.

It really was like he was driving a race unto himself, as there was some good competition for spots throughout the top 10 for much of the event. The NBC Sports announcers even seemed surprised the cars were able to go side by side and even three-wide as often as they did.

Cole Custer, who finished second but led no laps on the day, has had weeks where he’s had the car to beat. The difference is that his Ford hasn’t had as many races where he’s been absolutely untouchable. That is to say that Bell’s A game still feels a step above even that of Custer and Tyler Reddick. But the size of the gap between the Big Three changes on a weekly basis, which is what has made this Xfinity Series season so intriguing.

Welcome back, Justin Allgaier. The JR Motorsports driver himself will undoubtedly not declare himself “officially” back until he notches a win, and his third-place finish wasn’t even his best of 2019.

Yet Allgaier and his team have to feel a bit better about themselves simply because they were able to run with everyone, making passes on long runs and holding off other cars as well. If not for Bell’s dominance the No. 7 Chevrolet would have been a contender for the victory, and there have been precious few weeks this season where they could honestly say that.

The fact that it came at a track where Allgaier had never previously cracked the top five was just icing on the cake.

“I don’t know if we got something figured out, but the guys did a fantastic job,” Allgaier said. “We just had a long run car. Our car was really good at the end of those runs. We just were so uncomfortable trying to get fired off that we would lose a few spots and have to try and get those back. But still a great day.”

If Allgaier’s bunch can get some more early run speed figured out, there may yet be time for him to nudge his way into the title hunt alongside the Big Three not unlike what Joey Logano did in the Cup Series last year — and we know how that turned out.

For every driver like Allgaier who may have turned their momentum around for the better, there’s a John Hunter Nemechek going in the opposite direction. Just a week after saying he hoped to pick up the pace and return to the form he showed a few months ago, his day ended after only 31 laps in a season-worst 36th place.

Here's a look at the damage sustained to the No. 23. pic.twitter.com/guL9OkNg7f

Yeah, that’s a torn up back end, and it came as the result of a single-car incident.

Nemecheck racked up five consecutive top 10s between Texas and Dover, but he’s been trending the wrong way since with just two eighth-place runs in the last eight races. He’s flashed some speed at times in his first campaign for GMS Racing, but he hasn’t had the consistency to show he can contend for a title at the Xfinity Series level.

The good news is that he’s only 22, and if all of the Big Three get promoted for 2020, he figures to be a lot more competitive by default next year. Provided he avoids more days like the one he just had at New Hampshire, of course.

The biggest talking point of Saturday’s race came from two drivers who aren’t even series regulars. Paul Menard took exception to the way he was being raced by Harrison Burton, and he decided to teach the youngster a lesson, intentionally spinning him.

Take a look at what happened between Paul Menard and @HBurtonRacing late in the final stage at @NHMS. pic.twitter.com/tO2OGkZQQz

That run-in put a damper on a great afternoon for Burton (who eventually retired from the race in 29th) after he ran inside the top 10 most of the race and was a top-five car at times too. Naturally, both drivers had differing opinions about what led up to the spin, with Menard insisting that the youngster raced him dirty prior to his retaliation and Burton begging to differ.

Here’s the thing: Menard’s move in and of itself wasn’t abhorrent. As long as he keeps in mind that others will race him the way he races them, it’s just “one of those racing deals.”

But his need to teach one of the younger drivers a lesson was bizarrely timed as neither of them was driving for points, nor are they likely to cross paths again this year. Menard even said that he had never met Burton before New Hampshire, so it’s not like there was a history between them either.

It was, to borrow from a meme popular earlier this year, a weird flex: strange combination of drivers, unusual set of circumstances, and just plain weird. At least they talked about it after the race.

It’s that man again, Ryan Sieg. Though he wheeled the No. 93 instead of his more customary No. 39 (which had C.J. McLaughlin behind the wheel, making his Xfinity Series debut), Sieg turned in his second straight top-10 performance, proving he may have put his rough stretch from the late spring/early summer behind him.

Sieg’s team also made an impressive call to stay out instead of pitting during a caution late in stage one, restarting on the first row next to Jones. He fell back a little bit before the stage ended, but not that far, ending up fourth. Those stage points aren’t likely to matter if he can keep picking up top 10s, but they are solid insurance in case his underfunded bunch experiences any setbacks before the playoffs begin.

Only one Cup Series driver was entered at New Hampshire, and we talked all about him and his incident with a Truck Series driver. Let’s move on.

“Who’s the favorite? Whoever the favorite is is the best guy at Homestead.” – Christopher Bell

“I wasn’t driving the car right at the start of the race, so that kind of got us behind on adjustments, and from there, it was just not how we should be at the end of the race.” – Cole Custer

“I went to him. I don’t care what series he races in and who he is. He raced me in a terrible way, and I just decided I needed to hear from him what his story was. I didn’t like his story, so I’ll race him accordingly.” – Harrison Burton

Thank goodness for the Menard-Burton thing, because it livened up what would have been an anticlimactic final stage at New Hampshire. The racing from second to 10th was solid all day and occasionally ventured into full-fledged exciting territory, but it wasn’t sustained enough to make up for Bell being on cruise control at the front of the pack. The amount of overall passing at least provided some hope that the Cup Series race might see the same.

So, uh, fans of everyone else besides Bell might not like this. The next stop for the Xfinity Series is Iowa, where all he’s done in his last three visits is come in second, first and first. Ahem.