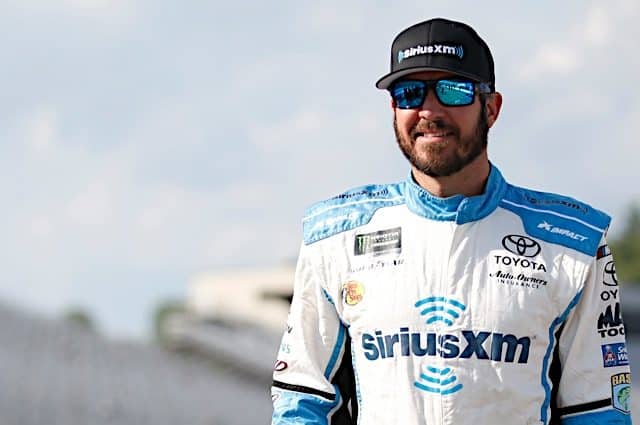 It was an eventful day for Martin Truex Jr. at New Hampshire Motor Speedway. But when it mattered most Sunday (July 21), Truex was in the right position for a solid finish, coming home sixth in the Foxwoods Resort Casino 301.

Truex started sixth and was battling for the lead with Brad Keselowski throughout stage one after passing his teammate, Kyle Busch. It was clear the No. 19 Toyota had winning speed; he just never had the track position of his rivals to show for it.

“We had a really good car today,” Truex said after the race. “We battled for the lead early, kept getting stuck on the bottom on restarts, and then we got stuck track position-wise because of pit strategy.”

But the real drama for Truex began on lap 144 when he got together with the No. 14 of Clint Bowyer.

Clint Bowyer and Martin Truex Jr. get together, and tempers are as hot as the track temps at @NHMS!

“I was just coming off of turn 4, three-wide and got completely run into the fence,” Truex said on the incident. “I mean, it happens.

“I was just thinking, what the hell is he thinking? He has got to make the playoffs. That was not a smart move.”

Both were able to continue but Truex was able to get the upper hand as Bowyer ended up finishing 20th.

Truex attributed part of the comeback to his crew and their hard work for readjusting a damaged racecar.

“It was a hell of a day to fight back to finish sixth with the car all tore to pieces,” he exclaimed. “I am proud of our guys. The guys did a good job of banging the fenders out, putting bare bond the nose and getting the holes filled on the front. That was the biggest thing. We just battled here. We weren’t good on restarts but we were good on long runs and that is where we made our hay.”

Truex and the entire No. 19 team will try and continue the momentum from their solid recovery when the Cup Series visits Pocono Raceway next weekend.

Bryan Nolen currently goes to the Dan Patrick School of Sportscasting at Full Sail. He would like to be involved in some aspect of Motor Sports after he completes school. He hosts a podcast that is on Apple Podcasts and Google Play called Sports Talk with Bryan and TB and lives in Boise, Idaho. Follow him on Twitter @TheBryanNolen
@TheBryanNolen
Previous NASCAR Post-Race Notebook: New Hampshire
Next Pace Laps: NASCAR Veterans Head In 2 Directions, Christopher Bell Dominates Xfinity at Loudon