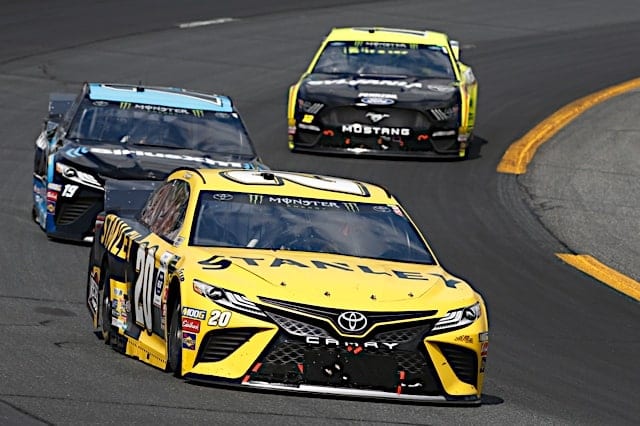 Erik Jones ran one of his best races of the season on Sunday at New Hampshire Motor Speedway.  The final results will show that Jones started fourth, placed second in the first stage and came home third, equaling his best finish of 2019.

But really, that’s only the tip of the iceberg.

Jones had to fight back from multiple pit road issues, contact on the track, and a late strategy call that nearly cost the No. 20 team all of its track position.  Yet Jones did finish strong, and in doing so he gained an advantage on several of the drivers competing with him for the final few playoff spots.

“Today was definitely a testament, I think, to our speed and this team,” Jones said.  “We keep fighting through it.  We never gave up.  We did what we needed to do, fixed damage when we needed to, and got a good finish out of it.”

Fighting through it has become a theme of Jones’ 2019 season.  While all three of his Joe Gibbs Racing teammates have won multiple races and are solidly playoff bound this year, Jones is still hovering around the cutoff line.  The No. 20 team has displayed good speed most weeks, but a combination of bad luck and mistakes have led to wildly inconsistent results, especially recently.

In the nine events leading up to Sunday’s race, Jones had six top 10s and three finishes outside the top 20.  The third place result at New Hampshire matched Jones’ finish at Kentucky Speedway last weekend.

But unlike Kentucky, Jones faced several issues that could have completely ruined his race.

The first incident was when Jones made contact with Alex Bowman on pit road during a caution on lap 113. The No. 20 had to return to pit road to fix the damage, costing the team its track position.  After the race restarted, Jones was working his way back through the field when he made contact with Ricky Stenhouse Jr.  The contact gave Stenhouse’s No. 17 a tire rub, ultimately leading to a tire failure and Stenhouse crashing out of the race.  Jones pitted again under the ensuing caution but got hit with a speeding penalty.  Once more, the No. 20 had to restart at the back of the line.

As Jones fought to recover, most of the other drivers near the playoff bubble were dealing with problems of their own.  Daniel Suarez got tangled up in an accident with Daniel Hemric on lap 110.  Clint Bowyer drew the anger of Martin Truex Jr. when the two drivers slammed into each other, and the wall, when Bowyer got loose of the exit of turn four on lap 145.  Jimmie Johnson experienced a power steering issue after a restart stack-up just before the second stage ended.

Problems continued for the bubble drivers into the third stage.  Ryan Newman faced engine problems with around 100 laps to go, but his team was able make repairs under caution and keep the No. 6 in contention.  Suarez lost a lap pitting under green due to a tire issue.  Kyle Larson crashed twice, with the second wreck on lap 265 ending his day and bringing out the final caution.

Meanwhile, Jones had climbed his way back to the top five.  While nobody could match Denny Hamlin’s long-run speed late in the race, the Larson caution gave Jones and his team an opportunity to play some strategy.  When Hamlin and several other drivers pitted, Jones stayed out, preparing to line up second to new leader Kevin Harvick.  However, in the process of feigning pit road entry, Jones drove over the orange commitment box.

It looked like a penalty.  NBC’s crew believed it to be a penalty.  Jones himself vented frustration over the radio, believing that he had lost his shot to win the race.  But NASCAR deemed that no commitment violation occurred.

What saved Jones is that the rule is written from the perspective of what drivers must do to commit to pit road.  At New Hampshire, drivers must put all four tires to the left of the orange box to legally enter pit road.  Since Jones drove over the box to get away from the pit entrance, his right side tires never went to the left of the box.  Therefore, per the letter of the rule, he never committed to pit road and thus did not draw a penalty.

Although he had averted disaster, Jones did not really challenge for the win once the green flag dropped.  Hamlin got past the No. 20 quickly and set to work on catching Harvick, culminating in a failed bump and run on the final lap and Harvick’s first win of 2019.  Jones ultimately didn’t get the victory that would have locked him into the playoffs.

But he leaves New Hampshire 14th in the standings, 28 points above the cut line with six races to go.  That’s not a safe margin at this point in the season, but considering that Jones left Chicagoland Speedway 15 points below the cutoff three weeks ago, it is a good points gain for the No. 20 team.

“It was kind of a sloppy day, in my opinion, but it was a good day,” Jones said.  “Got good stage points in the first stage and finished well at the end.

“Up in the top five, you can’t complain,” Jones added.  “And, especially with the points we gained today, it’s good.  We can definitely get more aggressive with that gap.  We’re getting close there to having almost a race on them.  If we can have a couple more good weeks we’ll be there.”

Sunday’s race had its ups and downs for Jones, but it proved to be just the kind of race the No. 20 team needed.  The finish and stage points are obviously helpful, but Jones succeeded at doing something that he has struggled with all year – rebounding from mid-race problems.  That experience may prove more valuable  to him than anything else as the battle towards the playoffs progresses.