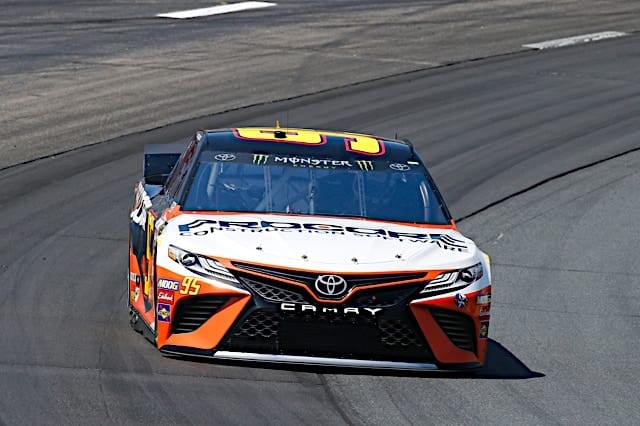 For the second time in a month, Matt DiBenedetto ruled the underdog roost with a top-five finish. He took fifth position on Sunday (July 21) in the Foxwoods Resort Casino 301 at New Hampshire Motor Speedway.

The No. 95 Leavine Family Racing Toyota was fast all weekend. DiBenedetto put the car seventh on the grid in qualifying and spent the majority of the race in the back half of the top 10. Sunday’s showing was his second top five and third top 10 of 2019. Additionally, the team has finished in the top 20 in five of the past seven races.

After the race, he spoke about overcoming the lack of practice early on in the event.

“That was awesome,” he said. “Great comeback for us. We raced up there all day and had to adjust on the car a good bit because we missed basically all of the final practice. Just shows how good my team is and my guys. They’re the ones that deserve it — Procore, our sponsor, for sticking by my side and believing in me to do this deal and all the folks at Toyota. Gosh, I know I reiterate it, but it took a lot of people for me to get this deal. I’ll never go a day without appreciating it. It’s awesome. Great day for the team.”

Behind DiBenedetto, Chris Buescher wound up 15th at the checkered flag. Despite a decent result, the No. 37 team members were left feeling like they could have done more after the race. Buescher ran among the top 10 nearly as much as DiBenedetto did, but a pit stop under yellow with less than 30 laps to go dropped him from 11th to 13th, and he was unable to regain the lost track position following the restart.

Ty Dillon picked up another top-20 finish, winding up 16th at the end of the race. Hot on Dillon’s heels was the No. 34 Ford of Michael McDowell in 17th.

On Saturday (July 20), the NASCAR Xfinity Series drivers took to the Magic Mile. Highlighting the efforts of the underdogs in that division was Ryan Seig, who continues to carry the underdog flag high this season. Seig wound up eighth at the finish but really ran better than that for much of the race. Seig was one of only three drivers to lead the race, and even though it was just one lap, it showed just how close to being able to win that his team really is.

Bill and Mickey Stavola began Stavola Brothers Racing in 1984 with an unknown 20-year-old driver named Bobby Hillin Jr. Hillin was from Texas at a time when nearly every driver in the garage was from the southeast. The first two seasons passed with little fanfare and even less in terms of results. The No. 8 team ran both Chevrolet and Buick cars and couldn’t finish better than eighth with either.

Then, in 1986, the organization expanded to two cars, with the second being piloted by former Series champion Bobby Allison. Allison’s value immediately showed not just in his results but those of teammate Hillin. Hillin finished fourth in the season-opening Daytona 500 and earned several other strong performances that season. At Talladega Superspeedway in April, Allison drove to the first win for the team. While surprising, it wasn’t completely unexpected. After all, Bobby Allison was good enough that he was thought capable of winning in any car.

While the same couldn’t be said of Hillin, he was certainly improving. Then the series returned to Talladega in July. The race was ultra competitive, with 49 lead changes — this taking place before the implementation of the power reducing device known as a restrictor plate. Hillin ran among the leaders and had a few turns at the front of the field. With 10 laps remaining, he swept past leader Tim Richmond and held on til the end, beating Richmond to the line by three car lengths. At the time, Hillin was the youngest winner at the Cup level as he was just 23 years old.

Allison would return the Stavola Brothers to victory lane for the final time in the 1988 Daytona 500 before his career was ended by an injury that June. But Hillin would never again stand in a NASCAR winners circle. He parted ways with the Stavola team at the end of 1990 and never finished in the top five in another car. The team folded after 524 Cup races in 1998, and the No. 8 became available for another driver to use.

I’d be willing to bet you can guess whose car it ended up on. Here ends the lesson.

Pre-race, @mattdracing weighed in at 207.8 pounds, post-race he was down to 198. Unreal temperatures that drivers dealt with today in New Hampshire. ?

Dating back to Kansas, @Chris_Buescher has nine consecutive top-20 finishes — both a career long for he and @JTGRacing.

Finished 8th at NHMS yesterday. So proud of our race team and how far we have come. A big thank you to @NightOwlInc1 for stepping up and sponsoring us. Heading to Iowa with some momentum ? pic.twitter.com/9ONaeDlruF