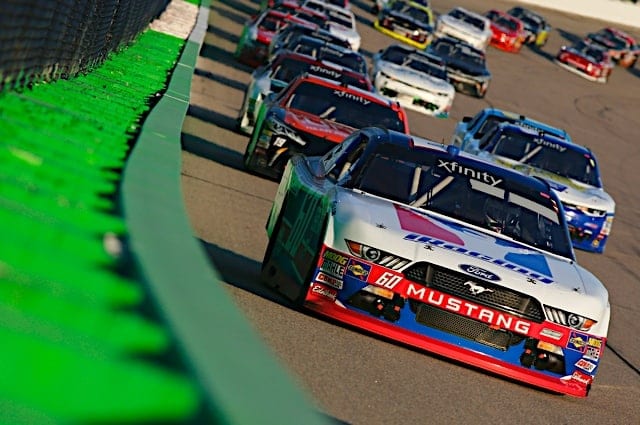 On Tuesday, July 23, NASCAR, NBC Sports Network and iRacing jointly announced the first-ever broadcast of eNASCAR live on NBCSN as part of NASCAR America. The first live broadcast will take place on Thursday, July 25, and it will be the first airing of a four-part series. On the last Thursday of every month, NASCAR America will live broadcast an iRacing event as part of a four-month series.

However, is the live broadcast a good showcase of talent? Clayton Caldwell argues why it is a good idea, whereas Mark Kristl refutes the notion in this edition of 2-Headed Monster.

Air Something Else Instead!

Do NASCAR fans care about iRacing? Although it is increasingly popular, there are plenty of fans who do not care about it. Immediately, NBC Sports Network has ostracized some fans.

At a time where ratings are unimpressive and stands are not full, alienating part of the fan base is a terrible idea. How then can NBCSN gain viewers for NASCAR America, reach mass amounts of fans and bring innovative ideas to the program?

Following NASCAR America, NBCSN often airs reruns of lower NASCAR series. On April 27, 2018, NASCAR bought the ARCA Menards Series. While the FOX network broadcasts some of the ARCA races, MAVTV airs the remainder of the schedule. Yes, there is already a TV contract in place, but not every major TV provider offers MAVTV. If fans cannot watch the ARCA races, they are forced to rely on highlights or articles or they tune out altogether.

ARCA serves as a feeder series for the major NASCAR series. Current NASCAR Gander Outdoors Truck Series drivers Grant Enfinger and Sheldon Creed are ARCA champions, and many current NASCAR drivers have competed in ARCA as well. To increase the popularity of ARCA, NASCAR America could air the highlights of the ARCA races. I certainly would tune into NASCAR America to see the highlights from the races at Five Flags Speedway, Elko Speedway and the two dirt tracks on ARCA’s schedule.

If fans become more familiar with ARCA drivers, then their interest in those drivers will carry over into the three major series when ARCA drivers move into them. More interest in all series generates better ratings, more tickets sold and more interest in the sport altogether. For the betterment of NASCAR and ARCA, NBCSN should air ARCA race highlights on NASCAR America instead of iRacing.

In case NASCAR cannot alter the MAVTV contract with ARCA or if NASCAR decides to broadcast ARCA races on FansChoice.tv, then what else should NASCAR America focus on instead of iRacing? Another option is to air highlights from racetracks across the country. Most likely, if someone attends a race at their local race track, they could likely become a NASCAR fan.

Speed51 already broadcasts many races at different tracks throughout the country. Surely NASCAR, NBC Sports Network and Speed51 could work out an agreement where NASCAR America features race highlights. If fans have not tuned into Speed51, they likely have never seen footage of races at Berlin Raceway, Kern County Raceway Park or Hickory Speedway. Many of those tracks are NASCAR home tracks. What better way for NASCAR to promote them than through race highlights from those tracks on NASCAR America?

Furthermore, if people see highlights from a race at Thompson Speedway Motorsports Park, they may attend a race there. This benefits the track, where young drivers cut their teeth before attempting to move up the NASCAR ranks.

Moreover, if people see the racing action at Memphis International Raceway, they may embrace it as an alternative to Rockingham Speedway and North Wilkesboro Speedway as a track which should be on one of the three major series’ schedules. Fans want good racing, and they remember the good racing from those two tracks. Give them an alternative, and they may attend a NASCAR race there.

Finally, NASCAR America could promote the up-and-coming drivers of NASCAR. When drivers such as Jeff Gordon, Dale Earnhardt Jr. and Tony Stewart retired, their massive fan bases searched for a new favorite driver. If those fans were frustrated with NASCAR, their favorite driver retiring may have pushed them off the edge and away from the sport.

Through airing highlights of NASCAR home tracks, NASCAR America would provide a path for fans to learn about the newcomers. In the NASCAR Xfinity Series, who heard of Chad Finchum before he debuted in the series? He raced at short tracks beforehand, but he was virtually unheard of. Imagine fans tuning into NASCAR America and learn about Bubba Pollard, Carson Kvapil and Derek Kraus. That way, if those drivers compete in NASCAR, fans are already familiar with them and have someone to root for.

Full disclosure, I have never watched or participated in iRacing. While those players are talented in that game, they are not athletes nor true representatives of NASCAR. NASCAR America bears the sanctioning body’s name.

This season, NBCSN and NASCAR launched the #MyTrackMyRoots Grassroots Racing Tour. NASCAR America interviewed Aric Almirola about his memories of going to his local race track. Take the program one step further and truly highlight the talent displayed by drivers at NASCAR home tracks on NASCAR America.

NBCSN has an opportunity to stabilize and possibly grow the fan base while helping stock car racing in general. The #MyTrackMyRoots Grassroots Racing Tour is a solid first step. However, switching that focus to broadcasting iRacing events negates that progress.

Don’t blow it; go all in! NASCAR America can instead use that air time to garner better racing and help fans deepen their love with NASCAR. –Mark Kristl

iRacing Serves Its Place in Racing

iRacing is the new fad around NASCAR, and NBC has picked up the tab and will broadcast live iRacing for the first time. However, the debate still rages on: is iRacing a good showcase of talent?

One of the things that transfers over is the knowledge of setups. The technology has gotten so advanced that you can learn what certain adjustments do to a car. You also feel the race car and learn about how a car handles if it gets looser or tighter. It’s not 100% accurate, but for the most part, it goes a long way into helping a driver learn what they want in a race car. Some people may not believe that, but just think about how far the technology has come.

There have also been a few drivers who have transferred their skills to big-time stock car racing. William Byron learned how to drive competitively on iRacing, and the skills he learned from that has helped him win a NASCAR Xfinity Series championship and the NASCAR K&N Pro Series East title. His talents have helped him move up to Hendrick Motorsports in the Monster Energy NASCAR Cup Series.

Other drivers, like Ty Majeski, have used the technology behind iRacing to help advance their careers and improve on their skills.

Even a car owner in the Xfinity Series believes in the power of iRacing. Dale Earnhardt Jr. has hired drivers for JR Motorsports due to their prowess on iRacing. He helped discover Denny Hamlin off of racing-simulation games. One of the best spotters in the business, TJ Majors, was discovered because he raced Earnhardt Jr. in a simulation.

While there are certainly some major differences, iRacing certainly has its place in NASCAR and asphalt racing. It may not be exactly the same, but the mentality is similar. It has helped drivers and teams get prepared for racing. –Clayton Caldwell

I am going to give the iracers a chance, but I would much rather see ARCA, Whelen Modifieds, Super Late Models showcased instead.