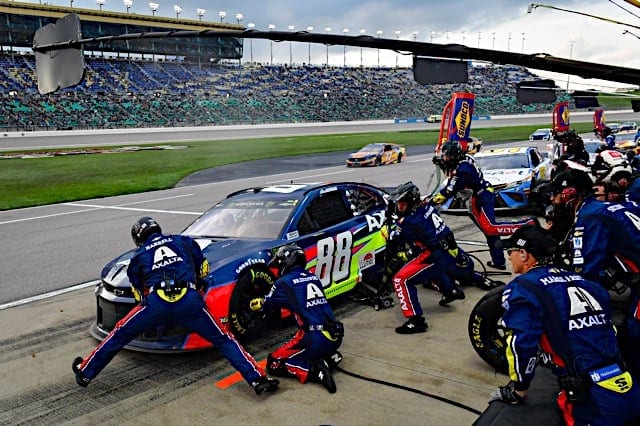 What will be the effect of eliminating the arm’s length rule?

On Wednesday afternoon, NASCAR sent out a competition bulletin announcing the discontinuation of the now-infamous “arm’s length” uncontrolled tire penalty.

The penalty had largely been defined for inconsistency. For starters, there wasn’t a lot of policing at standalone Xfinity and Gander Outdoors Truck series races such as at World Wide Technology Raceway at Gateway last month. Why? Because it wasn’t business-conducive for NASCAR to have another set of high-definition cameras for each pit stall, so a lot of calls in those races simply weren’t made.

There have been a lot of judgment calls with that rule in the rulebook, mostly going against Denny Hamlin. Hamlin got so fed up with the penalties that earlier this month he and his team had a sit down with NASCAR where they “provided evidence” as to why the rule was dumb and unenforceable.

So why did the rule get into the rule book to begin with? Simple: it was a reaction to NASCAR cutting the amount of pit crew members that can go over the wall from six to five, eliminating one of the tire holders from the equation. It was a move pushed by the Race Team Alliance to cut costs. (And as a side note, this was announced right after the 2017 season ended, so 40 people spent the holidays trying to find a new job. Thanks for that, RTA and NASCAR.)

Ultimately, however, the elimination of the rule seems like a Band-Aid. It would be much smarter to just bring back that extra crew member. There would be significantly less risk of teams actually having an uncontrolled tire on pit road, and there are significantly more expenses that teams can cut costs on than just one employee.

What does the most recent SMI news mean?

It was announced this week that Speedway Motorsports Incorporated has agreed on principal to effectively go private. The Smith family-owned Sonic Financial will purchase SMI, with current shareholders walking away with $19.75 per share. The sale is expected to be finalized before the end of the year.

There is speculation that the Smith family’s ultimate goal is to seek either a merger or a buyout from the combined NASCAR-International Speedway company, which is only a few months away from completing their own merger. There are a few problems with a completely combined company between the three parties, most chiefly that I don’t know if the France family would have the pure capital right now to afford to buy SMI outright. Even for the outrageously rich France family, spending $2 billion on making the family business private again, is going to be a hit for its bank accounts.

Such a huge merger would require the Federal Trade Commission to step in and have it go through the approvals process. And the big problem there would be, with next year being an election year, having an FTC commission appointed by a president who is not as business friendly as the current administration.

It’s still a very interesting concept of a completely merged NASCAR, however the schedule wouldn’t be quite as open as you’d think it would be. Dover International Speedway and Pocono Raceway would both have second dates, as I don’t think NASCAR would want to try and risk another huge anti-trust lawsuit. Las Vegas Motor Speedway will have two dates for the foreseeable future, or at least until the city stops paying so much for those dates.

Still, even if there is no merger, the fact that both track companies are going private and eliminating public shareholders from the equation will only be good news for the industry.

Will major NASCAR racing ever return to Nashville?

This SMI news comes off the heels of Nashville basically saying that it’s not going to spend money to improve the racetrack at the fairgrounds.

'Despite a lengthy presentation from Speedway Motorsports Inc. in May, [Nashville's] Briley administration says it does not have a viable proposal for improving the racetrack at the fairgrounds.'

I don’t really understand what Nashville is doing here. It decided to build this $270 million-plus soccer stadium on its own fairgrounds, a stadium that is only going to actually be used 20 times a year, instead of spending a fraction of that to improve the Fairgrounds Speedway — a track that could very easily have weekly racing if the city were to allow it, and with enough improvements made could be in the running for a Monster Energy NASCAR Cup Series date in the future.

I respect soccer, but come on. Soccer has been America’s so-called biggest sport in 10 years for the past 30. And people who do like soccer in this country seem to be much more interested in international play than whatever Major League Soccer is offering, judging by TV ratings.

Nashville could have such a fun niche here. How many major cities in America have a racetrack at their front door — never mind one that was built 60 years ago and with racing history on the grounds dating all the way back to 1904? Apparently that’s just not good enough, and the city of Nashville has made it rather clear now that it’d rather the track become a parking lot instead of a unique feature to its area.

Can anybody pick off Kyle Busch at Pocono?

Knock on wood, but right now, the weather forecast actually looks nice this weekend at Pocono. Just a 20% chance of precipitation on Sunday, and nothing on Friday or Saturday.

The new, unquestioned king of Pocono in the Cup Series is Kyle Busch. After going 0-and-25 to start his career at the 2-and-a-half-mile triangle, Busch has now won three of the last four races there, including the last two. Only two drivers have ever won three straight at Pocono — Bobby Allison and Tim Richmond — and nobody has ever won four out of five.

Martin Truex Jr. won the lone Pocono race in the last two years that Busch did not win. Pocono itself is a bit of a mixed bag when it comes to results; outside of Truex and Busch, the last two race winners there were Ryan Blaney and a rainout win by Chris Buescher.

The best driver in the field at Pocono who has strangely never won at Pocono is Kevin Harvick. Before finishing 22nd in last month’s race, Harvick had five straight top-five finishes. In 2018, Harvick led 89 laps out of 160 and won stage two, but had to settle for fourth at the finish.

I thought the “arms length rule” was to attempt to combat teams trying to cut corners to shave time off their pit stops at the expense of safety and in some cases their competitors (hitting a tire as they come in or leave the pits ruins someone else’s day). Personally I like the rule but not necessarily the way they’ve be calling it.

So this years past winners should have an * next to their name because maybe some other driver was taken out of contention for the win with this subjective pass thru penalty. And of course this would change who makes the playoffs and who wins the MENCS.

Taking both ISC and SMI private is good news for those of us that want more schedule changes. Both companies can now move races to tracks they don’t own without having to answer to shareholders and Wall St. Hopefully, this will all work to better the sport as a whole instead of just satisfying shareholders.

Why would they move an asset they own, a race date, and benefit a facility they don’t own. Will not happen. It could help Darlington, Hickory, Myrtle Beach, Greenville Pickens, get ARCA dates and a second cup date in the Spring in Darlington, kicking off the post Easter vacation season.
But I like your insight. Also, 51% of each company was controlled by “The Family.”
They really didn’t care what the share holders thought.

SMI – NASCAR. First, making them private makes sense as you now don’t have to disclose your profits and losses. I’ve got a feeling the balance sheets at ISC and SMI are not as boastful as earlier ones.
But I think you may have this backwards. Burton (on purpose, have you ever seen a birth certificate) Smith has always coveted owning a race-sanctioning body. Something not lost on his son, Marcus. They have the liquidity and purchasing ability to buy it. Yes, it would need to be financed as no one uses their own money to keep the possibility of bankruptcy in play should the wheels continue coming off. Smith can get the money. Realistically, NASCAR is more goodwill and its tracks are more valuable to developers, tracks like Fontana are worth more to a developer than as a race venue. Ditto Kansas, Richmond, Chicago. You could close those three and sell the property. Being near a casino as Kansas is would make a nice hotel, entertainment complex. I bet the Smiths have explored that one.
NASCAR is goodwill and has no tangible assets to offer. That is why they are merging with ISC so they will have something to show.
I doubt if the FTC would be very interested in this type of merger. They have more pressing issues like Sprint-TMobile, ATT. CNN and if Amazon decides to purchase Federal Express. Also, the value of NASCAR is not nearly as valuable as the folks who hang around Daytona Beach.
One thing, if Smith owned it, facilities would improve, the race-day experience would be better and the fans would matter again.
TV would be a partner but the on-site fan would become the focus.
That’s a good thing and may lead to the strength and sustainability in the future.

By the way, as a 10-plus year MBA, I have participated in mergers and acquisitions.

The ‘arms lenght’ rule was stupid to begin with. As long as the tire doesn’t present a hazard to any cars it should’ne matter.

Simply put, keep the tires and equipment in the pit box. What’s so hard about this? NASCAR has made this WAY too hard….