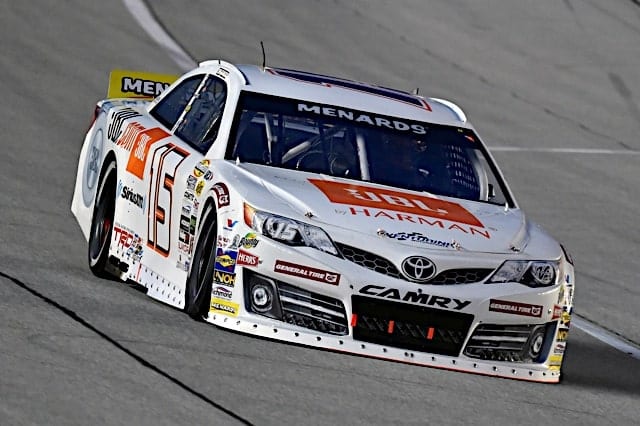 In a Nutshell: Through practice, qualifying and the first half of Friday’s (July 26) Forts USA 150, Todd Gilliland was the fastest man in Pennsylvania. Topping the practice charts and winning the pole with nearly two tenths of a second on the field, Gilliland held off a strong lap 2 charge down the frontstretch from Christian Eckes and proceeded to lead the first half of Friday’s race, coming down pit road for what appeared to be a routine four-tire stop.

Come lap 34, disaster struck for the Joe Gibbs Racing team. Hit with a blend line violation re-entering the track after pit stops, Gilliland was forced to serve a penalty. Once Bret Holmes came down for service on lap 36 after a strategy call hoping for rain failed, the lead was handed over to Eckes.

Though Gilliland was able to cut down Eckes’ lead by more than five seconds over the ensuing five laps, by 10 to go Eckes’ lead stabilized for good, with the Venturini Motorsports driver scoring his second win of 2019 and the fifth of his ARCA Menards Series career.

Pocono Dreams! @ChristianEckes puts himself back in victory lane with dominant victory at @PoconoRaceway! This is Eckes second win on the season & Fifth of his ARCA career. #TRD #FlyTheV pic.twitter.com/KagVStRGKS

Gilliland, Michael Self, Corey Heim and Raphael Lessard rounded out the top five. Self’s top five finish mitigated the damage done to his points lead by Eckes’ victory; the Sinclair Lubricants driver leaves Pocono Raceway with a 90-point lead over Eckes as the series heads into its dirt track swing (these points are unofficial per ARCARacing.com).

With his teammate Self running as strong as he continues to, Eckes only shot at winning the 2019 ARCA crown is to win, baby, win. Though it took help in the form of a pit-road penalty on Gilliland to score the trophy Friday, Eckes managed to hold a Joe Gibbs Racing entry at bay for the closing laps of the race and was by far the most consistent Venturini entry on the day. For those wanting a tight points battle, also remember Eckes is the defending race winner at Springfield, the tour’s next stop.

Gilliland was visibly frustrated with himself after Friday’s race, throwing his gloves and Hoosier tire garb after exiting his car on pit road. Having said that, Gilliland’s performance this Friday was noteworthy in the sense that for possibly the first time since Joe Gibbs Racing started the No. 18 team with Riley Herbst behind the wheel in 2017 did the car actually run like a Gibbs entry. Top of the charts in practice, way ahead of the field in qualifying and utterly untouchable when in the lead under green, an unforced (and minor) driver error was literally the only thing that kept the No. 18 team out of victory lane. For a powerhouse that’s won only two ARCA races in more than two years of competition, it’s about freaking time. Credit also to Gilliland for owning up to the penalty he incurred on pit road, asserting, “I should know the rules,” in his post-race remarks.

On paper, Self’s third-place finish was nothing unexpected for Venturini’s flagship No. 25 team, but the result came after the team narrowly averted disaster on lap 19, when Self was the first lead-lap car to pit in Friday’s race with an apparent right front tire failure (the team radio stated they observed chunking on the right-rear tire). Aided by the fact that the race went a full 60 laps without a caution flag, Self’s team was able to run 40+ laps on their tires to finish third, his fourth consecutive top-five finish.

Chandler Smith’s superspeedway results won’t show up on the scoresheet as remarkable, but any questions as to whether the short track ace would be able to show the same speed on a longer track were definitely answered Friday. After falling back outside the top five in the opening laps (with the team radio observing that the driver was severely under-driving the corners), Smith prevailed in a multi-lap battle with Gander Outdoors Truck Series regular Austin Wayne Self, battling all the way to third under green flag conditions before coming down pit road. A woeful pit stop, coupled with a pit road speeding penalty, ended any hopes the No. 20 of contending for the win. Nonetheless, the eighth-place finish was a success for the red-hot Toyota prospect.

Heim didn’t equal Ty Majeski’s results in the Chad Bryant Racing No. 22, but a fourth place finish in his superspeedway debut was impressive.

Tim Richmond’s 15th-place result was anything but “good,” as he finished 10 laps off the pace with an apparent miss in the engine (though the team speculated they may have run themselves out of gas on the radio). The good here, though, was that the No. 06 car was able to show up on track at Pocono on Friday, only a week after being involved in a wreck at Iowa Speedway.

A true testament to what the ARCA composite body is supposed to allow race teams to do.

Any chance Thad Moffitt had a decent run at Pocono Friday went out the window on lap 37, when the No. 46 car was forced to limp down pit road with an apparent left front tire rub. Moffitt finished three laps down in 11th, snapping a streak of four consecutive top 10 finishes in ARCA competition.

Don Thompson spun and wrecked Wayne Peterson Racing’s No. 0 car one week after the team’s No. 06 car was involved in a crash at Iowa. The team was able to repair their No. 0 enough to get it onto the starting grid for Friday’s race, though the team did not take the green flag.

The weather delay has allowed the @Arcafan06 team to get Don Thompson's damaged car to the grid @poconoraceway pic.twitter.com/L7ggIfmbA2

If there’s an operation that needs the upcoming three-week break in ARCA competition, it’s this one.

With pit stops looming and the skies graying around lap 25, the radio chatter surrounding the weather and ARCA’s plans for Friday’s race was, well, darker than the storm clouds. Listening to Holmes’ radio, the team’s spotter visibly saw lightning from atop the grandstands, yet the green flag stayed out despite the race being delayed over an hour due to a lightning delay (to be fair to ARCA here, it was impossible to the naked eye to determine whether the visible lightning was within the eight-mile range that’s supposed to trigger a weather alert).

The real kicker, though, came from the radio of Joe Graf Jr.’s No. 77 team. While Holmes and crew used their weather forecast skills in deciding to stay on the track as long as possible, hoping to pull a Justin Haley, Graf and Co. stated they expected ARCA to throw a debris caution after lap 30 … just long enough for the race to be official.

I’d call this a conspiracy theory, but given that a similar circumstance played out at Salem earlier this spring, with the the yellow flag flying at lap 98 only to see a 200-lap race ended at lap 101 in a driving rainstorm, it can viably be argued that the sanctioning body long seen as the viable alternative to NASCAR stock car racing is beginning to build a NASCAR sort of suspicion about itself.

Mike Basham had arguably the radio transmission of the weekend on Friday, saying of his No. 69 team that he’d been racing in ARCA for the past three years and seen only two sets of new tires. Fragility, thy name is the ARCA Menard Series field. Basham completed only two laps of Friday’s race.

Despite the grim predictions of the No. 77 team, Friday’s race went caution free. Always a good thing.

The story of the 2019 racing season, from the Armageddon storm that hit Chicagoland Speedway, to the bolt that sent Haley to victory lane at Daytona International Speedway, has been lightning, and that narrative continued at Pocono — a track that sadly knows about lightning all too well, the site of a strike that unfortunately killed a race fan in 2012. Knowing that, it was hardly surprising to see severe weather signage all over the fences on pit road and near the pedestrian tunnel, nor that the track efficiently cleared the grandstands as soon as the lightning alert went out.

What was surprising, though, was that for the entirety of what would become an 80+-minute lightning delay, the ARCA race teams were never cleared off pit road. Though drivers were pulled from their cars, pit road was full of drivers and crewmen for the entirety of the delay.

I’ve got no issue with it … after all, I can understand crews wanting to stay with their stalls and especially to be in position to cover their stalls and equipment in the event of precipitation and/or rain. But between having pit road full of people during a lightning delay mere weeks after Bubba Wallace was out throwing footballs to fans in a grandstand at Daytona that was supposed to be evacuated, it has to be asked whether NASCAR/ARCA really have their act together with regards to a lightning policy. In a world without litigation, this wouldn’t matter. To me, it doesn’t matter … it’s not on anyone beyond the individual to ensure their own safety. But seeing as Pocono Raceway (and Daytona for that matter) are no stranger to lawsuits, this seems a loose end begging to be tied up.

The really, really ugly is it looked like there wasn’t more than 300 people in the stands. 1 ticket taker, 1 hot dog vendor and 2 beer guys could have covered the whole event. Sad.

Poor David Gilliland. Continues to waste the best equipment in the field.

Brain fart. Was thinking of Dad and mentioned Todd