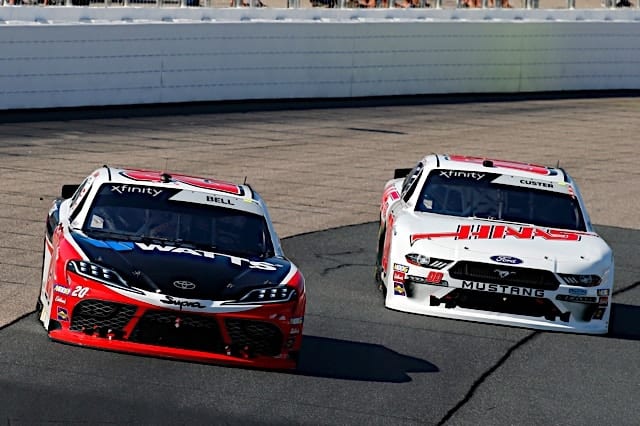 Two of the NASCAR Xfinity Series “Big 3” led the two practice sessions at Iowa Speedway on Friday (July 26), and the third member wasn’t far behind.

Christopher Bell and Cole Custer led the two practice sessions. In the first practice, Bell led the field with a speed of 129.646 miles per hour. In the second practice, Custer was fastest at 129.972 mph.

Another member of the Xfinity Series “Big 3” was second fastest. Tyler Reddick missed the fast time by 0.080 seconds, but he still clocked in at 129.220 mph.

Shane Lee was third fastest. His H2 Motorsports team debuted at Iowa Speedway in the first Xfinity Series race there earlier this season. He timed in 129.098 mph.

Custer was ninth-fastest. He completed 18 laps in the opening practice session.

Thirty-six drivers completed at least one lap in the opening session.

Custer paced the field in the second and final practice session. He drove his No. 00 Stewart-Haas Racing Ford to a quick time of 129.972 mph. He completed 52 laps in this session, and his fastest lap was his 32nd.

Reddick again was second-fastest. This time, he posted a speed of 129.833 mph.

Bell was third-fastest, completing his fast lap at 129.736 mph. The fourth and fifth quickest speeds were set by Chase Briscoe and Justin Allgaier, respectively.

Thirty-seven drivers completed a lap in the final practice session. Of those 37 drivers, 21 drove at least 10 consecutive laps. Bell and Reddick were the fastest two in that department.

When the Xfinity Series visited Iowa Speedway earlier this season, Bell won, Custer finished in second and Reddick finished one lap down in 15th place.

On-track action for the U.S. Cellular 250 will resume tomorrow (Saturday, July 27). Qualifying will take place at 12:05 p.m. ET, and the green flag will fly at 5 p.m. ET. The race will be broadcast by NBC Sports Network.