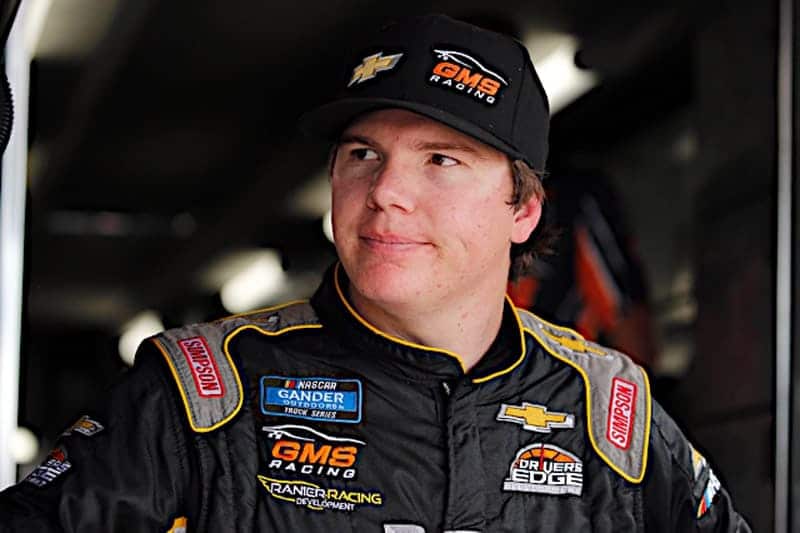 Tyler Ankrum looked awfully relaxed in the media center this Friday afternoon during availability after NASCAR Gander Outdoors Truck Series practice Friday at Pocono Raceway, one race removed from his upset victory at Kentucky Speedway. One seat over, Sheldon Creed was a little less so, though you’d never know it from his demeanor.

Entering race weekend in the Poconos, Creed’s sitting on the wrong side of the playoff cutline, and the Truck Series rookie knew all too well what that means.

“We’re to that point now where we have to win to get in,” Creed said Friday. “The next three weekends are all about winning.”

With powerhouse race teams such as Kyle Busch Motorsports and Ben Rhodes’ No. 99 ThorSport Racing team also fighting for spots heading toward the end of the regular season, Creed faces an uphill battle to get into the title fight. Fortunately, however, the GMS Racing driver has a few cards up his sleeve.

For one, Creed was fast, atop the final practice charts for much of the afternoon Friday.

“The truck’s pretty good, honestly,” Creed said. “A few little things to work out… it got loose at the end. [But] we’ve got a good middle ground to work with.”

Creed’s confidence was also boosted with news that broke earlier this week: being reunited with crew chief Jeff Stankiewicz. The duo won the ARCA Menards Series championship in dominant fashion last season. That ARCA experience has Creed comfortable at the Tricky Triangle.

“It always helps a little bit when you’ve been to a place,” Creed said. “You’re not learning the track at the beginning of practice, you already know your line, kind of where you need to be. Obviously the truck’s a little different, but it’s close. You can start making adjustments right away in practice and start working with what you’ve got rather than learning the track. It’s always nice to come to a place like this where you’ve been before and obviously have a past.”

Perhaps most notable for the former Stadium Super Trucks standout is that the Truck Series next race leaving Pocono is the annual dirt race at Eldora Speedway, which Creed has had circled all season long. It’s not surprising; Creed won the K&N Pro Series West race at the Las Vegas Motor Speedway dirt track last season.

“This is the best truck I’m going with this year,” Creed said. But for all his prowess on dirt, Creed’s honest about that upcoming race.

There’s no getting around it: making the playoffs in the congested bubble of the Truck Series garage is going to be more of a challenge than last year’s ARCA campaign was. Challenging, but not impossible — because the speed is there.