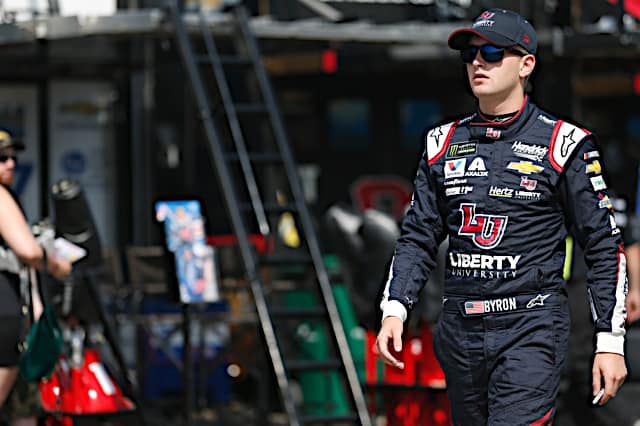 William Byron struggled mightily his rookie season in the Monster Energy NASCAR Cup Series last year, finishing 23rd in points and only netting four top 10s. This came after Byron dominated every series along the way of his meteoric rise, including Xfinity Series and K&N Pro Series East championships.

But since being paired with seven-time championship-winning crew chief Chad Knaus, Byron has enjoyed a much better sophomore campaign. Through 20 races, the Charlotte, N.C.,  native has six top 10s, including a second place at Daytona International Speedway. He’s 12th in points with a 61-point cushion over the playoff cutline.

In addition to being a budding Cup Series driver, Byron is also a senior at Liberty University. Byron talked to Frontstretch prior to this past weekend’s race at New Hampshire Motor Speedway about his surge in performance and his college experience.

Michael Massie, Frontstretch: I’ll start with the obvious question first. What are your thoughts on the penalty from this past week at Kentucky Speedway that kept you from having a shot at the win?

Byron: Yeah, I think it’s kinda been discussed quite a bit, but NASCAR made the right call, I think. It’s just unfortunate we were on the bad end of it. But it’s just one of those things you learn from. You get good and bad starts. Sometimes it goes your way, sometimes it doesn’t. Unfortunately, that one, with the circumstances the way they were, it wasn’t the best for us, but gotta learn from it, move on to this weekend.

Massie: You’re currently tied with Kevin Harvick and Austin Dillon for the most poles on the season. Are pole awards still a big deal in the Cup Series? And do you think there should be more incentive for winning them?

Massie: You haven’t finished worst than 24th this year, which is a huge improvement from last season. What do you consider the reason for your consistency this year?

Byron: I would say it’s just been the working-together aspect our team has had. We’ve really just been able to do a good job of working together and making sure that we’re doing all the right things at the track. I would say the consistency has come from the work that we’ve put in each week to prepare and make sure we’re ready to go when we get here and not making mistakes and stuff like that — just having the right mental approach and being mentally tough.

Massie: The crew chiefs you’ve had, Chad Knaus and Darian Grubb, are both champions. Can you compare their styles and why you’ve seemed more to click with Knaus this season?

Byron: I’d say Chad’s just a big leader, and he’s great at leading a lot of people and doing a good job of managing a whole weekend and managing a whole team. He’s done a great job of that. So I would say he’s just a great leader. Darian had some great qualities, too. I feel like Chad and I have gelled well, and being in my second year has kind of helped to progress my learning curve, too.

Massie: Do you think you might’ve moved up to Cup a little too quickly, or do you think the timing was perfect?

Byron: I think the timing was right because there’s certain lessons to learn in the Cup Series that you just have to go through to be able to understand. I feel like we learned those. I learned so much from last year that applied to this year that I think is helping me be ready for this year in general. So I would say the timing is right, it’s just a matter of going out there and doing it and understanding what the challenges are going to be once you get there.

Massie: Every other series, you took it by storm. So what was it about the Cup Series that made the adjustment harder compared to the other series?

Massie: How much has racing at the Cup level forced you to grow up and mature faster than the typical 21-year-old?

Byron: It’s forced me to kind of get into more of a business and performance state quicker in my life than most people. So I’ve been forced to grow up really fast and make sure I develop to where I need to be competitive at this level. It’s definitely a man’s sport, and you have to prepare yourself really well and make sure you’re doing all the things necessary in your personal life, too, to be at your best.

Massie: Speaking of being 21 years old, you’ll be a senior in business communications this fall, right?

Massie: What are you currently working on in school?

Byron: Yeah, I’m currently in an economics course at Liberty and studying for a business communications degree. It’s been going well, and I’m looking forward to continuing to pursue my education. And obviously, we’ve got Liberty on the car this weekend [at New Hampshire], so that’s going to be a great thing as well.

Massie: You’re the only Cup driver with a college as a sponsor. What are the benefits to that? Do you think it’s a model other colleges should follow?

Byron: I do. I think it’s a great business model for what we’re doing in my age group and kind of promoting to a younger audience to go to school and pursue their degree — show that I can do it with the schedule that we have on the racing side. I feel like it’s been a good thing for me, and [Liberty’s] been a great help to my career.

Massie: How much have you sacrificed to have a racing career?

Massie: With all those sacrifices, what’s that celebration going to be like when you win that first Cup race?

Byron: It’s gonna be huge. It’s gonna be really exciting. I can’t wait for that moment, and [am] just excited to hopefully do that soon.

Massie: What do you think your most relatable trait is to fans?

Byron: I feel like I’m a pretty humble person. I don’t like to really wear everything on my sleeve or I guess have everything out there for people to see or show off. I’m pretty humble. I really live a really normal life besides the fact that I race on weekends and do it in front of people. I live a pretty normal life and I like to do what kids my age do, which is play sports, hang out with friends, be in school. So I think I’m pretty relatable to people my age.

Massie: You’re in the playoffs by a pretty large margin right now with only six races left. Are you guys going to stay aggressive, or are you going to try to be conservative to point your way in?

Massie: What do you want fans to think of when they hear the name William Byron?’

Must be nice that a tax free university can give millions of dollars a year to a nascar team but pay no federal taxes bc they are a religious non profit. Only in America.