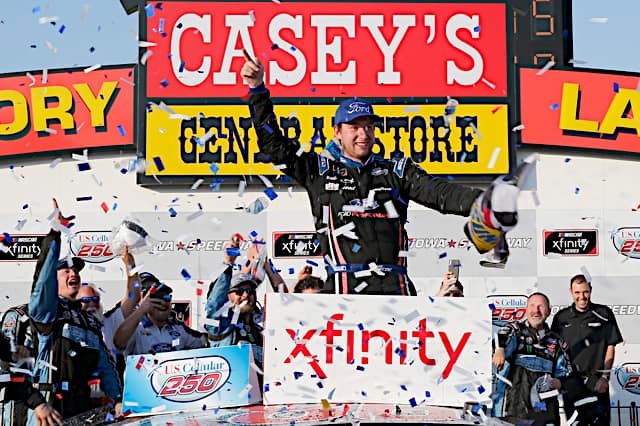 Chase Briscoe tracked down Christopher Bell after a penalty and took home the NASCAR Xfinity Series victory at Iowa Speedway on Saturday, July 27.

Briscoe drove over a hose during his pit stop, relegating him to the tail end of the field, but fought back and battled with Bell in the final 10 laps to take the lead and cruised on to win the U.S. Cellular 250.

Christopher Bell dominated for most of the day and led more than 230 of the 250 laps, starting on the pole and nearly leading the entirety of all three stages. He then held off hard-charging drivers like Tyler Reddick and John Hunter Nemechek to retain the lead, but Briscoe broke free from the pack and set his sights on Bell’s No. 20 Toyota Supra.

Ryan Sieg also made some noise, with the No. 39 appearing in the top 10 before settling for 12th at the end of the day.

Various small events brought out the caution flag throughout, including early yellows for Justin Allgaier and Austin Cindric hitting the wall on the same lap in isolated incidents.

Others with issues included Riley Herbst spinning early on, with Jeremy Clements becoming involved after the fact, and Michael Annett, who spun later on in the race. David Starr and Cole Custer each had their own problems late in the race, both hitting the wall at points and bringing out the caution.

The final caution flew for fluid on the track on lap 219, with pit road opening several laps later. Cleaning trucks were working in front of the entrance when cars began coming in, kicking up a lot of dust and smoke, and Dillon Bassett ran right into the back of the lead truck. Bassett’s day was done in the No. 90 machine, with both vehicles sustaining damage.

After tough battles with Nemechek and Reddick, Briscoe surged ahead and set out on a mission to pass Bell, who had gapped a lead thanks to those battles. He drove alongside him with about five laps to go, driving better in a pair of corners to get the lead and keep it for the remaining laps.

“It’s nice, for sure, to kind of silence everybody,” Briscoe said. “We got to get better if we’re going to get the big three.”

Briscoe will also race this coming Thursday at Eldora Speedway, where he will defend last year’s door-to-door victory over Grant Enfinger.