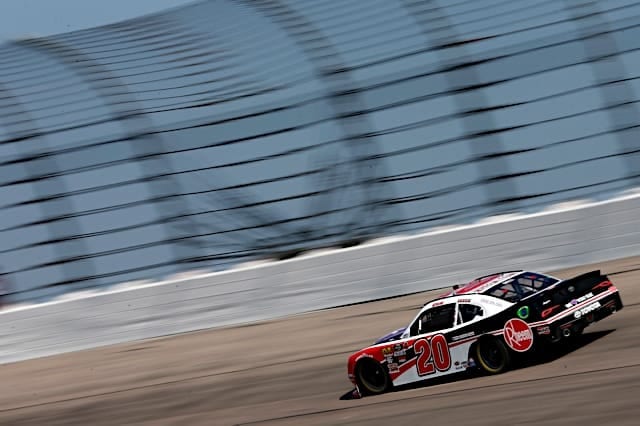 Despite leading 234 of 250 laps in the NASCAR Xfinity Series from the pole on Saturday afternoon at Iowa Speedway, Christopher Bell left without a trophy.

The five-time winner in 2019 was a victim of circumstance and competitors’ tire strategy, as race winner Chase Briscoe‘s fresher Goodyears wound up paying dividends with six laps to go. Bell held off John Hunter Nemechek and Briscoe on prior restarts, but as the final run went on, his No. 20 just kept slipping.

“There’s nothing we could’ve done different to win the race,” he told Frontstretch post-race. “Very happy with how our Rheem Supra was today, it was obviously the class of the field. Very proud to be able to be the guy who drives that thing, it was a rocket ship.”

The difference in Bell not leaving with the checkered flag was the pit strategy crew chief Jason Ratcliff wound up going with. But Bell was adamant post-race that the call was the right one. It was an instance where as the race played out, Bell realized his job was going to be a tough one.

“Whenever they had the yellows, I could kind of restart and take off okay, and then as the tires got hot, having fresher tires was a bigger advantage,” he said. “It was disappointing to be able to hold (Briscoe) off until—whatever it was, five to go—and not win the race, but that’s how it goes sometimes.”

The caution flag flew three times after Bell made his last pit stop under the lap 153 yellow. Each time, Ratfliff opted to keep Bell on track. However, when Briscoe came for his final set of four fresh tires, Justin Allgaier pitted for scuffs. Bell opted to not follow Allgaier’s strategy and stayed out.

“We didn’t have tires, so our strategy was spelled out for us,” he said. “We took our last set at 100 to go, because that’s the only way we were going to make it on fuel was to pit there. The No. 98 decided to gamble, not take tires, and it paid off for him.”

When asked if he agreed with NASCAR’s tire limit to teams during race weekends, Bell said he wished the scenario would have been different to let the race play out in his favor. But understood the circumstances.

“It sucks for a reason like that because it spells the race out for guys,” he said. “For example, we don’t have enough fuel to make it to the end, so we have to pit with 100 to go. And we decided to take our tires, as did all the competitive cars. A guy that’s not going to beat us heads up decides to gamble and not take tires there. If it goes green the rest of the way, he’s a lap down and a non-factor. But the fact he got a yellow where he could put tires on and win the race, it’s just the name of the game.”

It was looking like another afternoon of Iowa dominance for Bell, who had won the last two Xfinity Series races at the Fastest Short Track on the Planet coming into the race. Despite his success at the short track, the Norman, Okla., native was adamant that it’s mostly car, not driver, to which the success should be attributed.

“Great racecars, that’s what it boils down to,” he said. “I wish I could tell you I have something figured out here, but I don’t. I just have really good racecars.”

Being a national series standalone event, Bell wasn’t under the Monster Energy NASCAR Cup Series microscope, constantly being berated about where he’ll be driving next year, and enjoyed a weekend away from the spotlight being able to focus on the here and now.

“It is nice,” he admitted. “Ultimately, the only thing I can say—it’s the same answer every time—I’m not in charge of where I’m landing. It’s a matter of where the higher-ups want to put me.”