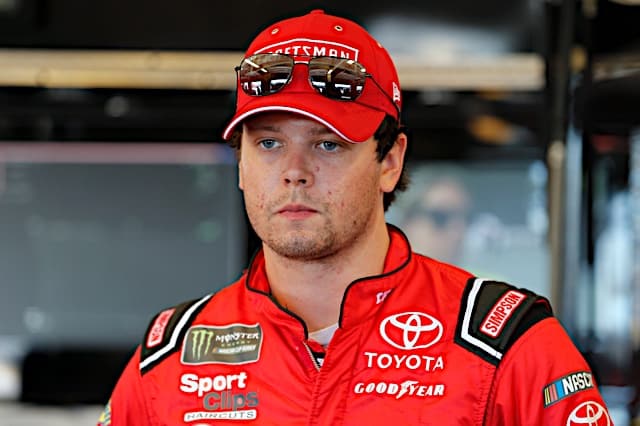 In an eventful pair of practice sessions, Daniel Suarez and Erik Jones led the way at Pocono Raceway on Saturday (July 27) in preparation for Sunday’s Gander RV 400.

Suarez was atop the scoring pylon for much of the opening practice, ending the session with a quick time of 172.516 mph, .034 seconds ahead of June polesitter William Byron (172.404 mph).

Outside of the quick speeds at Pocono, there was a lot of on-track action. Just over 10 minutes into the session, Kyle Larson got loose entering turn 2, over-correcting his No. 42 Chevrolet into the outside wall. Once it made contact, Larson ricocheted into the inside wall, forcing the Chip Ganassi Racing team to go to a backup car for the second consecutive week.

“I’m just disappointed in myself,” Larson said after the incident. “That’s two weeks in a row now. I hate that I did that. …We only have today for practice and I didn’t have much time in that practice session. Hopefully we can get some laps in the backup car. I was happy last week with the efforts to get the backup ready and the outcome in the race as well. Hopefully we can do it again today, but I’m just mad at myself.”

Larson finished the session with the 21st quickest time. Meanwhile, Chase Elliott, who was 14th quick, crashed coming out of turn 1 with roughly 15 minutes remaining. Like Larson, the No. 9 car got loose and over-corrected into the outside wall. Elliott simply said he made a “dumb mistake.”

Jones ran 24 laps, the most in the 50-minute session. Larson turned just two circuits prior to getting into the wall. Four drivers made runs of 10 consecutive laps, that list being led by Bowyer at 169.879 mph.

Jones led the way in final practice. Pocono is arguably the Michigan native’s best track, recording back-to-back top-five finishes at the Tricky Triangle. The No. 20 laid down a speed of 172.117 mph, .020 seconds ahead of Kurt Busch, who posted a time of 172.051 mph in the final minute of the session.

Coming off his first top-five finish on an oval last week at New Hampshire Motor Speedway, DiBenedetto was third in final practice at Pocono (171.373 mph). Byron was fourth on the board (171.246 mph), with June winner Kyle Busch rounding out the top five (171.226 mph).

Johnson was sixth on the board for the second consecutive practice. Ryan Preece jumped to seventh, as Ryan Blaney, Hamlin and Michael McDowell filled the top 10.

Towards the end of the 50-minute practice, both Larson and Elliott ventured on out to the racetrack in their backup cars, turning the 24th and 26th quickest times, respectively.

Qualifying for Sunday’s race is scheduled to get underway at 4:05 p.m. ET.