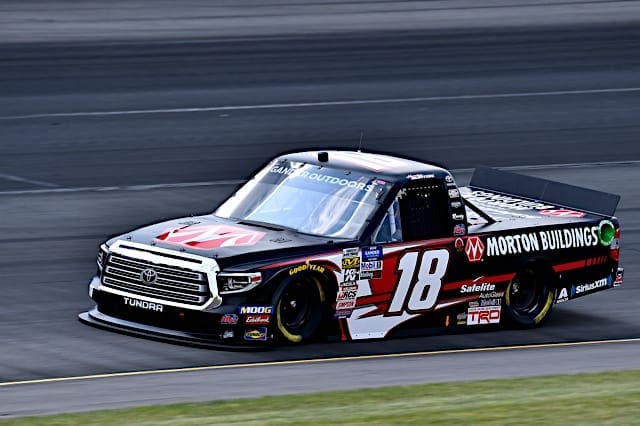 Coming into Saturday’s (July 27) Gander RV 150 at Pocono Raceway, Harrison Burton thought he needed to win one of the final three races of the regular season in order to make the Gander Outdoors Truck Series playoffs.

Burton began the race from sixth position, but the way the No. 18 crew chief Mike Hillman Jr. called the race changed from the beginning.

Stewart Friesen crashed out of the race on turn 1 of the opening lap. From that point on Burton and the No. 18 team points raced, entering the event 60 points outside of the cutline, coming into the race held by Matt Crafton.

In the opening stage, Burton finished third, earning eight stage points. In the second stage, the No. 18 truck stayed out while most of the front runners pitted, setting itself up with track position for the final stage. The stage victory awarded Burton 10 points, and his first playoff point of the season. However, he would restart ninth for the second half of the stage.

“I think that it definitely affected [our] the decision making,” Burton said of Friesen’s early crash. “I think we probably would have pitted under green coming from second and not got the stage win, setting ourselves up to win at the end. We almost won anyways. We were coming hard and needed a couple more laps.”

Burton took the checkered flag in third, recording his third consecutive top-five finish. Dating back to mid-June, it’s the No. 18 team’s fifth top five in the last six events.

As the Truck Series heads to Eldora Speedway next Thursday (Aug. 1), Burton’s happy to be in a position of not needing a victory to make the postseason.

“We definitely closed in,” Burton said. “We thought we were in a must-win, turns out we’re not all of a sudden. We’re closing the gap and doing our job. We’ve got to go into Eldora with the same amount of aggression that we do everywhere else.

“It’s just going to be a different animal, something I’ll have to learn quickly. It’ll be a lot of fun and there’s a lot of pressure on, something that’s kind of out of your element at the end of the [regular] season is going to be crazy and different. I know I’m looking forward to it, but I don’t know if I’m looking forward to it as much as I would an asphalt oval. My guys are going to get me a truck capable of winning, I just need to figure it out.”

Following the 150-mile race, Burton still sits ninth on the playoff grid, 13 points behind Friesen. After Eldora, the Truck Series regular season concludes at Michigan International Speedway, a track at which the 18-year-old has never turned laps.