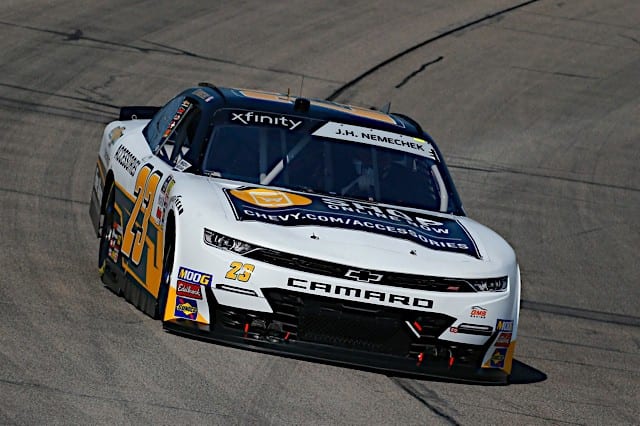 If it weren’t for strategy, nobody had anything for Christopher Bell in the NASCAR Xfinity Series at Iowa Speedway. But one of the only cars that did once the race wound down was John Hunter Nemechek.

The GMS Racing driver earned his second-best finish of the 2019 season with a third-place effort in Saturday’s U.S. Cellular 250 from Iowa — one that had its ups and downs, but ultimately wound up being a needed confidence booster.

“Frustrated with a third-place finish and the circumstances that we had, but overall a solid day,” he told Frontstretch post-race. “We really needed that as a team, a group, an organization. After the last few weeks, we haven’t had that much momentum. To come here and get a top five—I felt like we could come and contend for a top five—that in our book is a win today after the recent weeks that we’ve had.

It it weren’t for the final caution to set up another restart in the late stages, Nemechek said he believed he would’ve easily gotten to and passed Bell for the lead and ultimately the race win.

“For sure, I was coming,” he said. “I was just riding behind him. His stuff was falling off pretty fast. I feel like having fresher tires I was able to drive right up to his back bumper.”

Besides the caution that killed the No. 23’s momentum, restarting on the bottom and getting aero tight off the corners was Nemechek’s demise.

“If we would’ve restarted on the top, I feel like we could’ve won that race,” he said. “From the circumstances that played out, the No. 98 (Chase Briscoe) and No. 9 (Noah Gragson) were slide-jobbing each other left and right, crossing each other over and having a good time racing hard but clean, that’s what racing here at Iowa and everywhere we go is all about. Iowa is unique in its own way where you can do that. It makes a lot of fun racing as a driver.”

This kid might get better results if he started following the golden rule. Nobody cuts him any slack because he’s earned it, and until he smartens up he’s not going to get any help for anybody. There’s hard racing and there’s stupid hard racing, he’s an adherent to the latter.