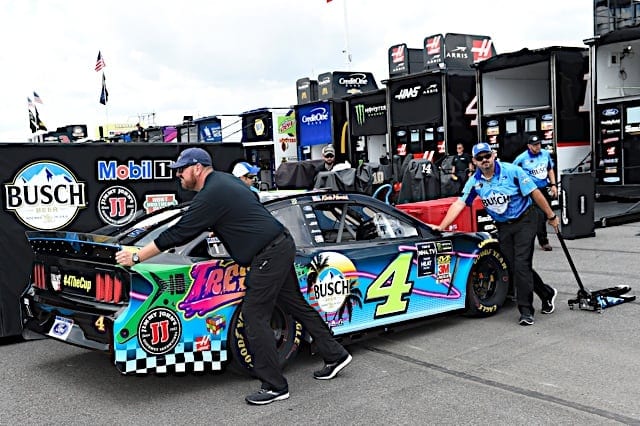 Despite not making a qualifying run in either of the two practice sessions, Kevin Harvick was quickest when it counted on Saturday, earning the pole for Sunday’s Gander RV 400 at Pocono Raceway in the Monster Energy NASCAR Cup Series.

It’s the No. 4 team’s fourth pole of the season (Las Vegas Motor Speedway, Richmond Raceway and Kansas Speedway), tying the amount Harvick had in each of the past two seasons.

Aric Almirola turned the third quickest time (173.164 mph), making it the eighth time he’s qualified inside the top three this season. Erik Jones, who was quickest in final practice, was fourth (173.110 mph), just ahead of Austin Dillon in fifth (172.659 mph).

Jimmie Johnson was sixth in both practice sessions before qualifying sixth for the race, as Kyle Busch, William Byron, Kurt Busch and Daniel Suarez round out the top 10.

Former Pocono winners Martin Truex Jr. and Denny Hamlin were 11th and 12th on the board. Chase Elliott and Kyle Larson were 23rd and 29th, respectively, after going to backup cars due to separate crashes in opening practice.

The green flag for Sunday’s race is scheduled to go green shortly after 3 p.m. ET. Kyle Busch has won the past two, and three of the past four, races at the Tricky Triangle.

Pool time. How many laps till slow witted Dillon falls out of the top ten !
Top twenty !