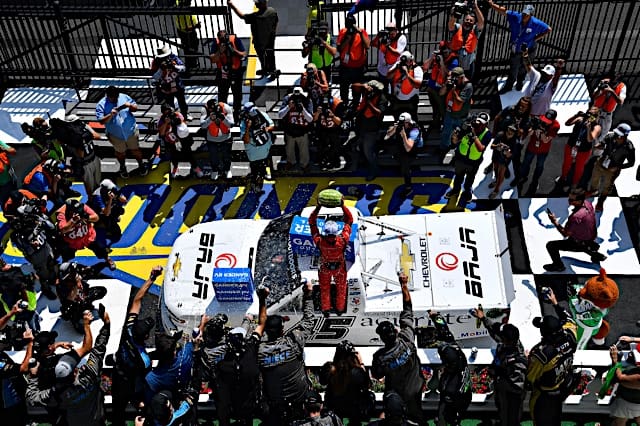 In NASCAR Gander Outdoors Truck series action on Saturday, July 27, Ross Chastain crushed the field in the Gander RV 150 at Pocono Raceway to get his third victory of the 2019 season for Niece Motorsports.

Chastain shot past polesitter Austin Hill at the drop of the green flag, during which the race immediately went into caution mode after Stewart Friesen got loose in the first corner on lap 1 and collected Anthony Alfredo, ending the race for both drivers.

When the race restarted again on lap 6, it immediately went to caution again for Bryan Dauzat‘s single-truck spin.

Chastain claimed stage one, his second stage win of the year.

Stage two was much tamer, with the only notable events being GMS Racing’s Sheldon Creed pancaking the wall on lap 20 (with no caution) and Hill parking his vehicle in the garage due to engine problems on lap 22.

Kyle Busch Motorsports’ Harrison Burton claimed the stage two victory, his first of the season, after Chastain pitted with three laps to go.

The third stage saw Chastain regain the lead after Burton hit pit road when it reopened, and he was never challenged the rest of the way.

Chastain told Fox Sports in Victory Lane that his team won this race for late Kaulig Racing Xfinity Series crew chief Nick Harrison, vowing that his team wouldn’t back down in the days ahead.

“I always thought dirt was for farming and asphalt is for racing, but we’ll go to Eldora and see what happens.”

Up next is the Eldora Dirt Derby at Eldora Speedway in Rossburg, Ohio, for the only national series race on dirt. The main event will begin around 9 p.m. ET on Thursday, Aug. 1, with TV coverage on Fox Sports 1.