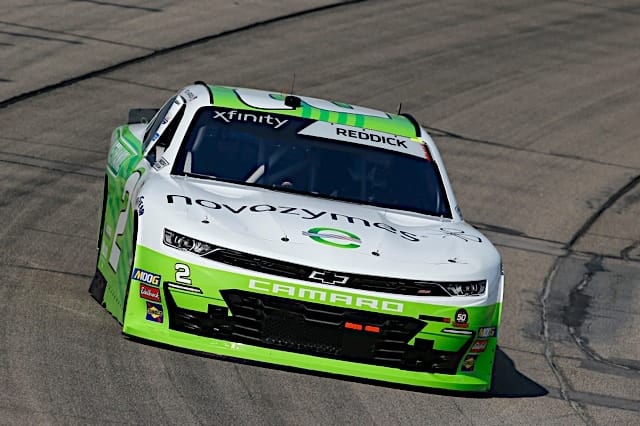 Despite a top-five finish in Saturday’s U.S. Cellular 250 at Iowa Speedway in the NASCAR Xfinity Series, defending series champion Tyler Reddick wasn’t pleased with himself.

“We really didn’t have any struggles,” he bluntly told Frontstretch post-race. “I just took myself out of the race. That’s all there is to it.”

His No. 2 Richard Childress Racing Chevrolet sustained minor front nose damage on a couple restarts, which wound up creating an ill-handling car for the remainder of the 250-lap event.

“These guys go and brake check on these restarts,” he said. “My aggressive nature has knocked my nose off twice here now. I’ve gotta do better. There’s a fine line between having a restart that’s going to put you in a position to pass people or you’re knocking half your nose off your racecar. You can’t turn, and when you get out of the car and see it, you’re not surprised.

“I guess I’ve got nobody to be mad at other than myself, but really frustrating. Been trying to have a good finish here for a long time. Had a first/second place car and ran fifth here with it. Really sucked at my job here today.”

He wasn’t all down in the dumps, though. The fact that a fifth-place finish is a disappointment speaks volumes to where Reddick thinks this team can go in 2019.

“The bright note is these guys keep working really, really hard,” he said. “RCR doesn’t settle for good enough. We weren’t bad here in June. But we couldn’t contend for the win, and finally we had a car to contend with today, never gave myself the opportunity to win.”

As for the road course stretch coming up with Watkins Glen International, Mid-Ohio Sports Car Course and Road America, Reddick isn’t overly excited to turn left and right, either.

“It’s concerning because you’ve really gotta keep the nose on the racecar at those tracks and I can’t even keep it on here at Iowa,” he said.