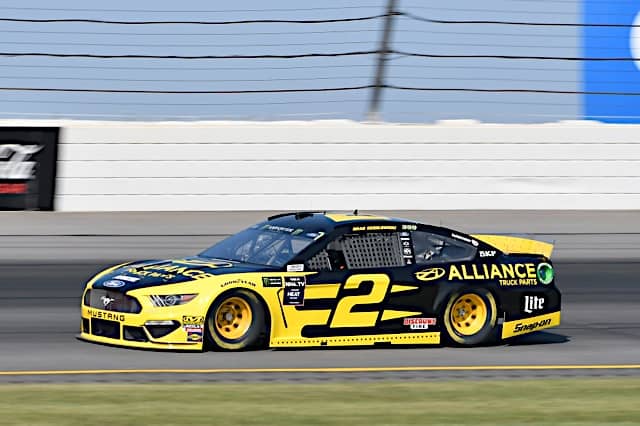 Since 2015, Pocono Raceway has always been one of Brad Keselowski‘s better racetracks. The driver of the No. 2 continued the hot streak at the Tricky Triangle in Sunday’s Gander RV 400, having to overcome an early hurdle.

On lap 4, Keselowski smacked the outside wall in turn three running behind Daniel Suarez inside the top 10. Two laps later, the No. 2 car had to pit to repair a right-rear tire rub.

“I was pushing too hard and got into the dirty air of the [No.] 41 car and I just couldn’t turn,” Keselowski said after the race. “I couldn’t get it to stop sliding. Just part of the rules package, and I have to compensate for it and failed to do so.”

Despite the early mishap, the No. 2 team never lost a lap, leaving the pits right in front of race leader Kevin Harvick. Keselowski would remain in front of the No. 4 car until Harvick had to pit, but ultimately finished the opening stage in 25th.

In the second stage, Keselowski moved toward the front, playing the strategy game up to eighth. But it was during the final stage that the No. 2 team shined, as the race became a sprint of who could make it to the end on fuel.

While Denny Hamlin, Martin Truex Jr., Erik Jones and Harvick were more than 15 seconds ahead of Keselowski, the No. 2 car jumped to fifth on a restart. As that quartet of drivers raced hard and tried to save fuel, Keselowski was saving fuel, running laps more than one second off the pace consistently. He remained in fifth with a freight train of cars behind him doing the same thing.

Keselowski’s strategy of hoping the first four would run out of gas ended with seven laps to go, when Josh Bilicki stopped on the racetrack with an apparent driveshaft issue.

Anyone got any information on what happened here?!?!

It looked really bad but I don’t have all the facts yet… https://t.co/gAsfya2PPE

The 2012 Monster Energy NASCAR Cup Series champion was none too pleased with an eighth-place finish.

“It’s a positive,” Keselowski said of his day. “We had a shot to win there at the end if one of those cars five laps down didn’t decide to stop on the racetrack, which is really frustrating but part of it.”

The eighth-place finish is Keselowski’s eighth top-10 effort in the past nine races at Pocono. Seven of those finishes have been inside the top five.

The series heads to Watkins Glen International next week where Keselowski has had mixed results, finishing runner-up three times between 2011 and 2013. But in 2018, the No. 2 car finished 17th.