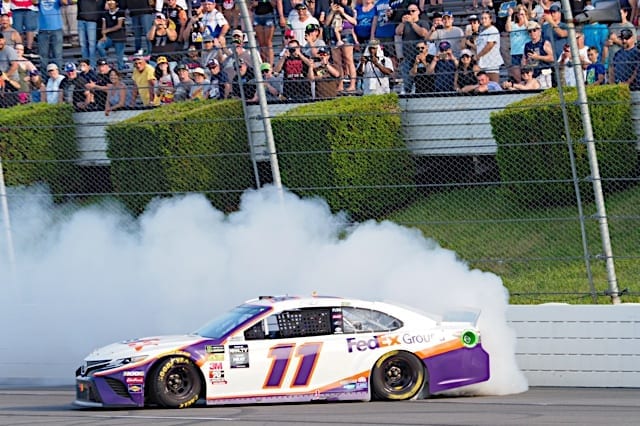 One week ago, Denny Hamlin beat himself up for his performance on the last lap after narrowly losing to Kevin Harvick at New Hampshire Motor Speedway. One week later, Hamlin made all the right moves to win the Gander RV 400 at Pocono Raceway on Sunday afternoon (July 28).

Hamlin saved enough fuel and held off hard charges from his Joe Gibbs Racing teammates Erik Jones and Martin Truex Jr. to get the redemptive victory. The win is the 34th of Hamlin’s career and his fifth at Pocono, but his first at the track since 2010. He now trails Jeff Gordon by one in all-time Pocono wins.

After the win, Hamlin held up five fingers and said to the Pocono crowd, “Five.”

“I’m so proud of this FedEx Ground team for giving me another race winner, two weeks in a row.”

Late in the race, Hamlin found himself in third, trailing Jones and Truex. All three needed to save fuel to make it to the end. Hamlin rode in the draft of his teammates for a while, but when they slowed even more to save, Hamlin passed the duo on the outside of the track.

Hamlin said he was in fuel-saving mode while trying to get around Truex and Jones. Once he got into the lead, Hamlin saved fuel instead of stretching the gap. Hamlin was thankful to Pocono for adding PJ1 to the track and making his late-race passes possible.

A late caution put the race into overtime, but it didn’t matter. Hamlin had saved enough fuel to make it to the end and had enough speed to pull away from Jones and take his third checkered flag of 2019.

Up next for the Monster Energy NASCAR Cup Series is Watkins Glen International on Sunday, Aug. 4.

How about those Dillon boys …
29th for Ty
19th for dumb dumb…
And Hemric raced to a 7th for RCR
Make grandpa proud, Richard put his almost 700 acre Grizzly Creek Montana ranch up for sale in 2012 for $ 10 million, it finally sold a few months ago for 5x million. No more shooting buffalo in a herd for dumb dumb