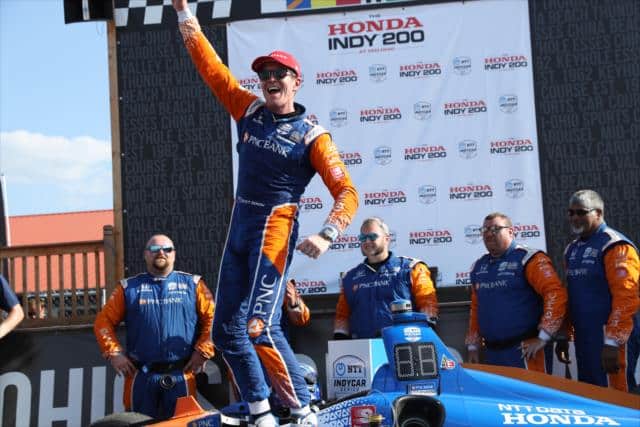 Strategy is always king at Mid-Ohio Sports Car Course, but Scott Dixon sure does make a good case for the throne.

The five-time champion took home a sixth career victory at Mid-Ohio in the NTT IndyCar Series’ annual visit to the Lexington, Ohio road course on Sunday (July 28), putting him just one win behind Michael Andretti’s record seven trips to victory lane at one track, with Andretti’s record in Toronto.

That's No. 6 at @Mid_Ohio. Don't count @scottdixon9 out of the championship hunt just yet.#Honda200 // #INDYCAR pic.twitter.com/zBWxodPvPA

The win also headlined a banner day for the Chip Ganassi Racing squad, who claimed the top two spots on the podium after a stellar performance from rookie Felix Rosenqvist.

While Dixon moved to the front on strategy and his mythical fuel-saving abilities, the Swedish-born driver carved his way to the front of the field over the course of the day on pure pace, making several bold moves on the likes of Alexander Rossi and Will Power.

Making it interesting in the last few laps, Rosenqvist tracked down Dixon, setting up a photo finish at the line, ultimately coming up just short of his first career win.

But a win, let alone a one–two finish, didn’t always look like it was in the cards for the Ganassi crew.

While it was a solid start for Power, it was an awful start–and end–of the day for the Arrow Schmidt Peterson outfit. After the green flag dropped, James Hinchcliffe and teammate Marcus Ericsson made contact in a crowded turn 4, spelling disaster for both Arrow SPM drivers. The contact sent both drivers to pit lane, putting Hinchcliffe multiple laps down and Ericsson behind the wall, ending their day as soon as it began.

As the race progressed, Ohio-native Graham Rahal was the first to elect for a three-stop race in front of the hometown crowd and was soon followed by most of the field, including a few–but not all–of the front runners. Newgarden also elected to make three stops, as did his teammate Simon Pagenaud, while Rossi and the Chip Ganassi Racing pair of Dixon and Rosenqvist went for the two-stop strategy.

? @Frosenqvist just worked past @AlexanderRossi, and now has an eye on leader @12WillPower ?#Honda200 // #INDYCAR pic.twitter.com/PXCWLS5HuS

Right on Power’s gearbox, Rosenqvist hung with the former series champion for nearly 10 laps before going around the outside of turn four to take the lead away from the struggling Team Penske driver. Several laps later, the rookie dove in to pit lane, handing the lead back to Power.

Once the dust settled from the first round of pit stops, it was Newgarden who emerged at the head of the field. Rosenqvist cycled out in sixth, while Power, Dixon and Rossi rejoined the race back in 10th, 11th and 12th with only one pit stop left to make.

Although back in midfield for the moment, the battle raged on as Power and Dixon scrapped for track position. With a run down to turn four, Dixon attempted to go around the outside of the Penske machine at turn five. But Power made his Dallara extra wide, pushing the Kiwi out of the way.

However, several laps later, Dixon made the pass stick, faking to the outside, then diving inside at turn four, forcing Power further down the order.

At the front of the field, Newgarden battled traffic, struggling to get by Zach Veach and R.C. Enerson, making his first start in nearly three years. Held up for several laps, Rosenqvist closed the gap to nearly five seconds before the championship leader dove into pit lane for his second stop of the afternoon.

This hurts for @josefnewgarden and @Team_Penske. The championship leader was stuck on pit road for more than 13 seconds ?#Honda200 // #INDYCAR pic.twitter.com/6OqR9DJ4yA

But the second stop proved disastrous for Newgarden, who couldn’t get fuel to flow for what seemed like an eternity. Had everything gone to plan, the leader would have emerged well ahead of his championship rival Rossi, but ended up nearly eight seconds behind the No. 27 with one stop remaining for each driver.

Soon after, several drivers bailed on the two-stop strategy, including the race leader. Rosenqvist, abandoned the two-stop plan on lap 46, surrendering the lead to his teammate.

Further back, Newgarden plowed through the field, trying to make up for lost time. With forty laps remaining the Nashville-native started to track down the Andretti Autosport pair of Rossi and Ryan Hunter-Reay, running in fourth and fifth.

Meanwhile, the true class of the field continued to slice and dice his way to the front. Rosenqvist again tried to get by Power in turn four, leading to a side-by-side drag race all the way through the esses, where he ultimately shrugged off the 35-time race winner to move into second behind Dixon, who had stretched out a cozy 15-second lead.

On lap 59, Rossi ducked into pit lane for his final stop of the afternoon, followed by Dixon and Power over the next two laps, giving the lead back to Rosenqvist.

Shortly after, the three-stoppers started to make their final stops of the day, including Newgarden. His third visit to pit-lane was much more successful for the No. 2 crew, who had replaced the entire refueling rig mid-race, allowing Newgarden to jump his championship rival with just 25 laps remaining.

As the laps ticked away, Hunter-Reay played defense for his teammate, holding on to the final podium position and keeping Newgarden at bay behind him.

A few spots back in the order, Rossi began to the feel the pressure from behind, all while having to save fuel. Pagenaud, with Spencer Pigot and Herta behind him, filled up the Californian’s mirrors, before the Frenchman himself started to struggle, leading a freight train of hungry drivers.

With fewer than 10 laps left, Rosenqvist started to reel in his veteran teammate, shrinking a 15-second gap to under a second. Clearing a freight train of lapped down cars, Rosenqvist set up a last-lap dash to the line, threatening to steal away the win at the last second.

But the Mid-Ohio master kept the rookie at his gearbox, taking the checkered flag by a nose.

That's all that separated teammates @scottdixon9 and @FRosenqvist at the @Mid_Ohio finish. That's the closest finish we've ever seen here.

While the Ganassi drivers were fighting for the win, Newgarden threw away what would have been a successful day. Trying to crossover Hunter-Reay to take the last spot on the podium, the championship leader banged wheels with the No. 28 before spinning off into the gravel, dropping him all the way back to 14th.

Wow. On the final lap, @JosefNewgarden lost it in the Keyhole at @Mid_Ohio.

That will help @AlexanderRossi move to only 16 points down in the championship race. #Honda200 // #INDYCAR pic.twitter.com/o5sIt1cidu

The incident gifted Rossi a fifth-place finish, allowing him to cut his championship deficit to just 16 points.

But he wasn’t the only driver to make a big jump in the standings. With the win, Dixon now sits just 62 points back with four rounds remaining on the calendar, putting him within striking distance of the title.

Power, despite not being able to convert his pole into a win, came home with a solid fourth place finish. Pagenaud, who also cut into Newgarden’s championship lead, ended the day in sixth, followed by Spencer Pigot, who had a quiet, yet impressive afternoon. Herta followed the No. 21 home, who came home ahead of Rahal and Bourdais to round out the top 10.

The series will return to action next month at Pocono Raceway for the ABC Supply Co. 500 on Aug. 18.

Never thought I’d see the day open wheel cars were beating and banging more than NASCAR, but the last couple of years they have been! Another great show by Indycar, keep it up!