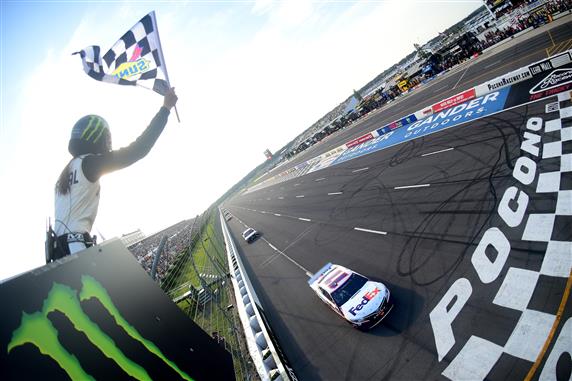 With most of the field saving fuel during the final stage, Denny Hamlin passed Joe Gibbs Racing teammate Erik Jones on lap 142 and hung on to win the Gander RV 400.

Hamlin had to survive a surprise overtime finish after Kurt Busch, Ricky Stenhouse Jr. and Michael McDowell wrecked on a restart on lap 156. On the ensuring final restart, Hamlin was able to drive away after Jones made contact with Kyle Larson coming out of turn 1. Larson hit the wall and ended up falling from third to seventh before finishing fifth.

Jones had a solid points day and finished second.  The result gave the Joe Gibbs Racing driver a solid 39-point cushion on the playoff cut-off line. With a few racetracks coming up that the young driver has had success at, including Bristol Motor Speedway and Darlington Raceway, Jones is now in solid position to make his second trip to the playoffs.

A fuel mileage finish in the current era of stage racing is like pulling a coat out of the closet and finding a $50 bill in a pocket. There’s a small chance of it actually happening, but if it does, it’s pretty enjoyable to say the least.

What would have been a fairly standard race with a standard finish became must-see television. Even without any of the top cars running out of fuel during overtime, the drama of not knowing who would end up actually making it to the checkered flag made the finish more than digestible.

Pocono Raceway is known for placing an emphasis on strategy calls for crew chiefs, with how hard it is for drivers to pass. But with tires providing a bit more of a factor in this race than they normally do in Pocono along with the stage breaks, the first half of this race ended up being a lot of fun thanks to all of the different strategy calls.

Who doesn’t like to see crew chiefs Rodney Childers (from Kevin Harvick’s team) and Adam Stevens (Kyle Busch’s crew chief) trying to one-up each other and reacting to curve-balls like the lap 85 caution for Chase Elliott’s wreck?

Pole sitter Harvick, as per usual at Pocono, had arguably the best car on track but also had some of the worst luck. Harvick gave up a win in stage one on a strategy call, then had to settle for second to Jimmie Johnson at the conclusion of the second stage.

Late in the race, Harvick was coming in hot after being told he had enough fuel, running up as high as third and with just a second and a half between himself and the leader when the caution fell with just a handful of laps to go. Harvick was shuffled back on the final restarts and had to settle for a sixth-place result.

Kyle Busch won the first stage and everything seemed to be going in his favor in the first half of the race. But then, after staying out during the lap 85 caution, rain hit the racetrack on lap 93 before Busch could pit under the green flag in order to re-inherit the lead during the future stage caution.

Busch pitted under green with just a couple of laps to go, and with no leaders pitting on the stage caution, he was stuck near the back of the pack to start the final stage, a death sentence at Pocono. Busch finished ninth, with a fourth win in the last five Pocono races  out of the 2015 champion’s hands.

Johnson won the second stage after Busch dropped to pit road right before the caution came out with two laps to go. Johnson otherwise had a fairly quiet day, having to start at the rear of the field after a pre-race inspection failure. He was resigned to the mid-pack after pitting following his stage win, finishing 15th after making no real headway on the late-race restarts.

With just a few laps to go and the race getting tighter than ever, it took a lightly regarded Rick Ware Racing Chevrolet to change the entire race.

Josh Bilicki, making just his seventh start in the Monster Energy NASCAR Cup Series, slowed coming out of turn 1 on lap 154 and ended up stalling out on the first backstretch after the driveshaft broke. The caution all but ended Harvick’s chances at winning and would have ensured everybody would make it on fuel.

Bilicki’s race-changing caution may trigger a number of different takes and ideas throughout the next week. Mainly, what can NASCAR do to cancel out the influence a driver and team that low on the totem pole can have on the conclusion to a race? It always happens after situations like this, such as Derrike Cope a couple of years ago at Richmond Raceway or Morgan Shepherd following a Cup race at New Hampshire Motor Speedway a few years ago.

The answer, ultimately, is not very much. Bilicki and RWR had as much right to be out there as anybody else who passed pre-race inspection, paid their entry fee and met minimum speed. Perhaps, if anything, NASCAR could raise the minimum speed threshold in stage three, but then that may cause problems for fuel millage races such as this one.

Watkins Glen International is easily the wild card among the six tracks hosting the final six races before the playoffs. Last year’s race was also arguably one of the most memorable of 2018, with most popular driver Chase Elliott getting the first win of his career and being able to clinch a spot in the playoffs. Even throwing out 2018, “The Glen” has still been home to some of the most memorable finishes of the past 10 years.

Outside of the Cup Series, there’s another unique race this week on the NASCAR calendar. The Dirt Derby at Eldora Speedway is the lone dirt race on all three national touring series schedules, and with just two more races before the NASCAR Gander Outdoors Truck Series playoffs, the Thursday night race is going to be a must-see.

How… did William Byron end up fourth?

Having started at the rear of the field following a pre-race inspection failure, William Byron was just there during much of the race, with an average running position of 13th. But with strategy seeming to play right into crew chief Chad Knaus’ hands and Byron saving enough fuel to have two great final restarts, the North Carolinian ended up fourth.

Byron exits Pocono with a 61-point advantage and in excellent shape to make the Cup Series playoffs in just his second season at this level. The No. 24 Chevrolet has had speed all season but has struggled to finish races. With two top-five finishes in the past month, Byron might have finally gotten over that hump. And if he has, that’s terrible news for the rest of the Cup Series garage.

7th question to be answered…..

How is it that the NBC folks were so awful wrong on the fuel situation that even with the caution laps at the end one would figure some lead lap cars would still have run out of fuel due to the overtime finish. Best we know not only did all the cars finish under power at the end, they subsequently also made it back around to pit road. Hamlin even had plenty for a good burnout (I do not like those) and still fired up the car and drove it to victory lane.
Heck even Harvick who seemed to be the only lead lap car running near actual race speed did not run out.

Just seems like with today’s tech that the race broadcast “experts” could have a better handle on fuel mileage. I know it partially depends on the car’s setup and engine but still….

Excellent point and I felt the same way (as did my friend watching the race with me). How can the TV guys be so wrong about the fuel window. The only conclusion I can reach is that they purposely mislead us to create fake drama. So, from now on when they say the fuel window is from 38 to 40 laps, we should add 4 or 5 laps to their phony math.

All the crew chiefs were wrong. They have all this data down in the pit box with throttle % and know what they can get based off dyno and efficiency calc but it seems all the teams were off and I am sure they will do their due diligence in the shop to determine why. There were several that were stating they would be 2 laps short but then ended up having enough for an OT finish…without shifting it’s hard to believe they saved that on the track.