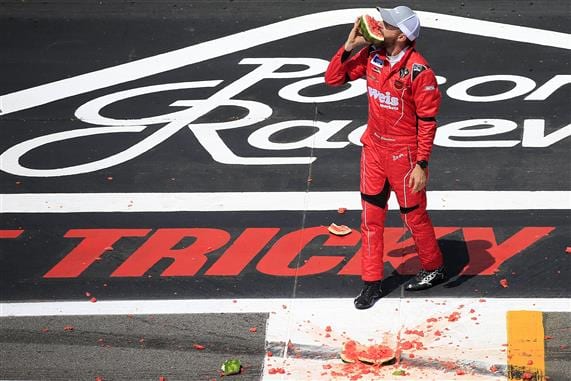 In a Nutshell: Ross Chastain scored his third win of the 2019 season with a dominant performance in the Gander RV 150 at Pocono Raceway Saturday afternoon, July 27. He dedicated his victory to late Kaulig Racing crew chief Nick Harrison, who died suddenly last weekend at the age of 37.

“I know we were a little mad because we lost Nick Harrison,” Chastain said. “We realize that everybody goes when it’s their time, but, man, we miss that big boy. These boys (on the Niece Motorsports team), a lot of them worked with him.

“I got to work with him at Kaulig Racing this year. Man, we miss him.”

Chastain led a race-high 54 of 60 laps, relinquishing the top spot only long enough to make a green-flag pit stop with three laps remaining in stage two. He took lead once again under the stage break and never looked back en route to a one-second victory.

you knew it was comin' pic.twitter.com/6W7hINBEcI

“We had a really good truck,” Burton said. “We were really, really fast. It was fun. We had to charge through the field there. We started ninth on the last restart and just had to go. I just ran out of time there in the end. It’s frustrating. There are guys that had good strategy. We were cutting it close on fuel. I knew they were riding around there a little bit. I thought maybe I could get to them, so I was driving as hard as I could there at the end, but it just didn’t come our way.”

Christian Eckes and Brett Moffitt rounded out the top five.

But instead of coming out of the gate with a strong season, Eckes had failed to finish inside the top 10 in his two prior starts. He crashed out of the season opener at Daytona International Speedway and then ended up 14th at World Wide Technology Raceway at Gateway after starting on the pole and leading 57 laps.

Fast forward to Pocono where he started 13th. Though he ended stage one seventh, he was outside the top 10 by the end of stage two. When the final stage ran caution-free, Eckes was able to recover to a fourth-place finish.

Despite a career-best run, Eckes walked away wanting more out of Pocono, though.

“It’s a little frustrating, having a truck that good and not be able to win with it,” he said. “Just kind of lost a lot of long-run speed there. Overall, it was a great week. First and fourth. We will take this momentum and move on to Eldora [Speedway] and Michigan [International Speedway] with KBM [Kyle Busch Motorsports] boys.”

While Eckes walks away frustrated with not getting to victory lane after he had won the ARCA Menards Series race Friday (July 26), there is plenty to be said about finally finishing well in a truck that’s found victory lane six times this season (five with Kyle Busch and once with Greg Biffle). It’s much-needed momentum heading into the next couple of races he has scheduled behind the wheel of the No. 51 Toyota.

Stewart Friesen Crashes Out on Lap 1

Stewart Friesen’s ended his day before it ever really began. He put himself in a three-wide situation going into turn one on lap 1 with an overly aggressive early move that sent him spinning into the outside wall. On the way, he clipped Anthony Alfredo, who was doing his best to avoid the spin, causing significant damage to both trucks.

Friesen was out on the spot, though Alfredo was able to run two more laps before retiring as well. The pair finished 31st and 32nd.

“We got spun around and made contact with the wall,” a visibly disappointed Friesen told Frontstretch. “Just a bummer. Got on the apron and it went around. I had a lot of friends and family here today, and I wish I could have done more. …We’ll be back, it just sucks right now.

“I expected the [No.] 16 to block, that’s what he does. He moved down to block and I tried to get up behind him and Sheldon [Creed] was on the outside. I’m not going to post blame on anybody, it’s just racing. I should have flexed my elbows out a little bit more and used some more racetrack to not clip the apron. I clipped it and went around.”

Understandably, Alfredo was frustrated with getting taken out of his first start at Pocono so early.

“I’ve got limited opportunities this year, and I’m very blessed to be in the position that I’m in,” he explained. “I’m just trying to make the most of every time. That’s not the way you want them to go. I’m trying to work hard and take advantage of these opportunities so I can run full time next year.

“You know, just someone else’s incident that we got caught up in and there was nowhere to go. I don’t know what happened, I didn’t see a replay, but he (Friesen) slid up and there was some guys underneath us, so I was trying to get through a hole and it got filled.

“I’m very appreciative of Gander Outdoors, and Gander RV for sponsoring this race. Toyota Racing brought great trucks. I think we will be able to have one in victory lane at the end of the day. Proud of my guys, DGR-Crosley, they did a great job. Very thankful for all of my partners. I had a lot of people here to support me, so really bummed they came all this way to see a quarter of a lap, but we will try to make it up to them in Michigan.”

Both drivers aren’t pleased about finishing the final two spots in the running order (and who would be?), but for very different reasons. For Alfredo, it’s simply the limited amount of seat time he gets in a part-time deal with DGR-Crosley. He’s already got his eyes on next season in hopes of finding a full-time ride and a shot to race for the championship.

Meanwhile, Friesen took a major points hit and finds himself in a precarious position just 13 markers ahead of Burton, who scored the most points at Pocono (52) and is just below the cut line with two races remaining before the playoffs begin.

Ben Rhodes sits sixth, 51 points ahead of Todd Gilliland. Hill, Creed and Johnny Sauter round out the top 10.

Chastain’s victory at Pocono means there will be no more than seven series regular winners before the playoffs begin, guaranteeing him a spot in the championship battle. He’ll join Hill, Sauter, Moffitt, and Ankrum in the playoffs. Assuming Enfinger doesn’t win and maintains the point lead, he’ll take one of the remaining three playoff spots, along with two others (currently Crafton and Friesen) who will make the playoffs on points.

Stand-up man that @RossChastain is!

Wins a race, makes a mess and then cleans up after! #GanderRV150 #WhatTurn4 | #NASCAR pic.twitter.com/5M2MTbZCpe

First time at the tricky Triangle, A solid p2 finish today @poconoraceway for the @RAILBLAZA_USA @ToyotaRacing tundra. Thank you #17 @DGR_Crosley @doug_campbell95. I cant thank these guys and @Summerbrooke23 enough for all the support and advice! Thank you fans, you’re awesome! pic.twitter.com/6rcSwVLY3w

Solid day in the @SIRIUSXM Tundra, P4. Just lacked a little bit of long term speed at the end. Have some work to do for the next one but overall proud of my @KBMteam for all the effort!

I am so over everything right now… mechanical issues in practice, get taken out on lap one before we even got through turn one, and get home only to have broken A/C. I guess things really do come in threes ? pic.twitter.com/KK42XNkpkE

Up Next: The Truck Series heads straight to Eldora for the Dirt Derby 150. Last year, Chase Briscoe, in a one-off start, snagged the win in an epic side-by-side battle with Enfinger. The five heat races to set the field begin at 7 p.m. ET, followed by the last chance qualifier at 8:15 p.m. ET. Coverage for the race itself begins at 9 p.m. ET on FOX Sports 1; the race can also be heard on your local MRN affiliate or SiriusXM NASCAR Channel 90.